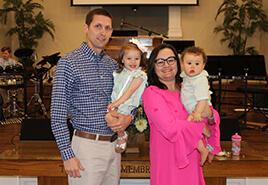 After struggling with infertility for a number of years, we chose to move forward with adoption. We chose to work with a local agency, and after only nine months of waiting, we were connected with our daughter Emberly’s birthmother. She was due in just a couple of weeks, so there was no time to overthink anything. We had the opportunity to speak with Emberly’s birthmother on the phone before she delivered and met her for the first time at the hospital while she was in labor. After Emberly was born, we spent time in the hospital with her birthmother and her biological grandparents, who were supporting their daughter through the adoption process.

After Emberly’s adoption, we knew our family was not complete. We knew that while our first adoption was quick, it wasn’t typical, so when Emberly was only nine months old, we decided to start our second adoption.

The agency we had previously worked with no longer seemed like the best fit for us, so we started researching new adoption options. We found Angel online and felt as though they would be a great fit for our second adoption.

A New Kind of Relationship

Early into our wait with Angel, we received a call that our profile was being considered by an expectant mother who had delivered that day. We were on pins and needles waiting to see what would happen, but the opportunity never led to anything.

A couple months after our first call, we were contacted with a second opportunity. An expectant mother and father were interested in getting to know us but were also considering two other couples. We sent a quick text introducing ourselves and started communicating back and forth with the expectant mother. With Emberly’s adoption, there wasn’t necessarily time to build a relationship since her birthmother was due so soon, so with this opportunity, we really tried to put ourselves in her position and understand the emotions she must be feeling. We found out she and the expectant father had three sons and were in a difficult situation, so we tried to be respectful of their time and emotions.

After a couple weeks of texting, even before Angel told us, the expectant mother shared with us that they were officially choosing to move forward with us for their adoption plan. The expectant mother and father only lived a couple hours from us, so we offered to meet them one weekend for lunch. We brought Emberly with us, they brought their three young boys, and we all spent the afternoon together. After the first couple moments of finding our groove, we settled into comfortable conversation and had a great day together.

Our Relief, Her Heartbreak

We stayed in close communication with the expectant parents through the remainder of the expectant mother’s pregnancy, and we drove up the morning of her scheduled C-section to be at the hospital once the baby was born. The hospital provided us with our own room, and we met our son, Axell, less than ten minutes after he was born. We were both so overcome with emotion when the nurse brought him in to us, and holding him for the first time was surreal.

While at the hospital, we did visit with Axell’s birthmother once. She had asked to see Axell so she could share pictures with his birthfather, who was at home with their boys. We spent only a couple minutes with her, and she reassured us they were fully prepared to move forward with the placement. There had been moments during her pregnancy when we were concerned they were going to choose to parent, so hearing her share that with us was a relief. In the same moment of our relief, our hearts simultaneously broke because we knew the weight of the decision she was making.

Both of our parents drove up to meet us, along with Emberly, while we awaited our clearances to return home. We were lucky to only have to wait four days and headed home as soon as we were allowed. We could not wait to settle into our new life as a family of four.

Initially Axell’s birthparents chose a closed adoption, but once we all met, they asked if we could send milestone updates. Since Axell’s birth, we have sent his birthparents updates, but we do not always hear back from them. We may not hear from them often, but we are forever thankful for the gift they have given us and the selfless choice they made.

We never expected to have two fast adoptions, both of them taking less than one year. Through both adoptions, but especially Axell’s, we were constantly reminding ourselves we were not in control and had to allow the process to work. We both focused on enjoying each step, each other, and Axell’s birthparents without overthinking the outcome. Although both of our adoptions were quick, they had their own differences and challenges, and we are grateful for all the birthparents in our lives who blessed us with our children.