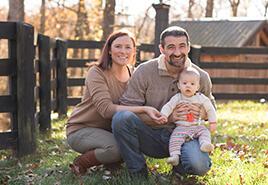 We always knew we could love non-biological children. We have been surrounded by nieces, nephews, friends’ children, and godchildren who have meant the world to us and whom we love to claim as “ours.” When we found ourselves struggling with infertility, we were approached by our fertility doctor, who opened our eyes to adoption. From that point, we were all in.

We found the adoption research a bit overwhelming. There were so many options, different types of providers, different stories, and different expectations. We knew we specifically wanted a provider that was able to guide us through each step, and we found that in Angel. We loved that both of the owners had been through adoption and that the majority of the company had ties to adoption. It felt as though they really related to us, and that was comforting.

Coming into the adoption process, we were impatient! Thankfully, we didn’t have to wait long for our first opportunity. Our profile was selected only one month after being presented, and we were so excited! We could not believe this was already happening for us. Our first couple conversations went smoothly, and we really seemed to be connecting. We knew the expectant mother was early in her pregnancy and that she and the expectant father were still considering their options. Sadly, the expectant mother miscarried, and our first opportunity ended.

We were selected two additional times after the first, one of them fizzling out before it really went anywhere. The second felt uncomfortable to us for a number of reasons, and we chose not to move forward.

Only one week after our third opportunity, Angel contacted us with a fourth opportunity. We were just as excited and nervous for this opportunity as each one prior and hoped this might be the one. We sent a quick text to the expectant mother introducing ourselves and let her know we were available to chat when she was ready. She responded, letting us know she was at work and would be in touch soon, but in the meantime, she sent over short bios about her and the expectant father and a list of questions for us while letting us know she was interviewing other families. We were shocked; nothing had happened like this yet. The expectant mother seemed so thoughtful and thorough, and we were already feeling the love she had for her unborn child.

We spent one full month communicating with the expectant mother and helping her get to know us. We started connecting on levels outside of the adoption. We found we both valued our health and fitness, we had similar parenting views, and we enjoyed the same hobbies. It no longer felt like we were potentially adopting her child but that we were gaining a best friend.

Both Erin and the expectant mother’s boyfriend expected that she had delivered as she had stopped responding to text messages. When Erin arrived at the hospital and was brought to the delivery room, she was welcomed by both the birthmother and our son, Charlie, lying across her. She greeted Erin by saying, “Hi, Mommy. Do you want to hold your son?”

The plan had been for Luke to meet us the day we discharged from the hospital, which was supposed to be in six days, but as it turned out, it was only 24 hours after Charlie’s birth. With nowhere to go since our Airbnb was not ready yet, Charlie’s birthmother invited us to stay with her. Not wanting to impose on her space during recovery, Erin was initially hesitant, but at her insistence, she went home with her. Erin and Charlie stayed with his birthmother for four days, and as it turned out, it was invaluable time spent together. Charlie’s birthmother shared some wonderful parenting tips with Erin, and she breastfed and pumped for us.

When Luke was finally able to join us in Charlie’s birthstate, he was overjoyed to be meeting his son in person and not over FaceTime. Our Airbnb was close to Charlie’s birthmother, and we continued to see her during our stay in her state. While Charlie’s birthmother and birthfather were not together, we did have the opportunity to meet him when he signed his parental consents, and as luck would have it, he and Luke had quite a bit in common and bonded. We were able to spend one additional day with him at his home and agreed that when in the future we were back for a visit, we would plan to see him as well.

Since Charlie’s adoption, we have maintained a close relationship with Charlie’s birthmother. We have plans to visit with her in the future, but until that time comes, we communicate through texts, social media, and a photo sharing app our family has access to. We are looking forward to the day we are able to be together in person again to spend that precious time together.

While we recognize Charlie’s adoption was “easy” in adoption terms and that our friendship with his birthmother may not be typical, our adoption journey did not come without challenges. Even the most beautiful stories have difficult moments. For us, we found that letting go of control was almost impossible and that waiting for someone else required patience we didn’t know we had.

Learning to trust the process, ourselves, and Charlie’s birthmother tested us and our relationships. We are forever grateful for our son and the amazing relationship we have built with his birthmother, but it did not come without grief. After we adopted Charlie, we felt a weight lifted we didn’t recognize we were carrying. Looking back, we realize we had lost sight of each other and how much emotional trauma we had carried with us from infertility. We now see how important it has been for us to not only celebrate Charlie and our family of three but also to allow ourselves to grieve the journey that brought us to him.