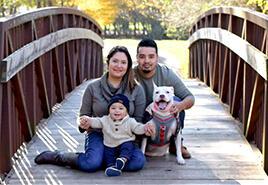 Prior to getting married, we had started trying for children with no success. After our wedding, we started down the path of fertility treatments, first with IUI and followed by a handful of rounds of IVF, all without success. Before our final round of IVF, we started discussing adoption and that we were ready if this coming round did not result in a pregnancy. When it ultimately was not successful, we started our adoption research.

We found Angel, who was local to us, and we felt comfortable with them after our initial meeting. Coming into the adoption process, we were nervous! There were so many unknowns, and we’d heard both positive and negative stories and did not know what to expect.

Our friends and family were excited for us to be starting the adoption process, especially those who knew the full extent of our fertility journey. Everyone, including us, were so anxious for us to get started and hopefully have a quick adoption process.

Shortly after joining Angel’s program, we were contacted and told our profile had been selected by an expectant mother. We were both excited and nervous and felt really hopeful. We only spoke with the expectant mother through text for a couple weeks. The expectant mother ended up delivering dangerously early, and the baby was transferred to a hospital with a NICU that was better prepared for a premature baby of his age. After the trauma the birthmother went through and the medical concerns of her son, we chose to walk away from the opportunity to allow her space to make the best decision without the added pressure of adoption. We felt confident we were doing the right thing, and when the birthmother ultimately chose to parent, it solidified our decision.

A couple months later, we were selected by a second expectant mother, who was in her third trimester. We spoke with her every other day throughout her pregnancy and were preparing to make travel arrangements. Late in the day one weekend, we received a call from the expectant mother’s mom that she was in labor and had requested that we come to the hospital. We packed the car and headed to the expectant mother’s state through a snowstorm. When we arrived at the hospital in the early hours of the morning, we were brought to our own hospital room and introduced to the sweetest baby girl, whom we had chosen to name Brianna. We spent time with Brianna in our room and started to imagine our life with our daughter. Later that day, we brought Brianna back to her birthmother’s room and met her for the first time, along with her mom. Brianna’s birthmother asked that Brianna spend the night in our room, and the plan was for Brianna’s birthmother to sign parental consents the next day.

The next day, Keiry was waiting with Brianna to be given permission to discharge and Estuardo was at the hotel getting everything ready for us. Everything at the hospital was starting to take longer than expected, and when Keiry was unable to get answers, we started to get nervous and thought something might be wrong. Close to one hour later, the hospital staff told us Brianna’s birthmother wanted to speak with us and see Brianna. When we walked into her room, Brianna’s birthmother was crying and unable to look at us, while her mother sat in a chair, also avoiding eye contact. The hospital social worker was the one who shared with us that she had chosen to parent and would not be moving forward with adoption. Shocked, we said goodbye to Brianna and her birthmother and returned to our hospital room. As soon as we walked into our room, we felt the world crumble around us. We both sobbed. Brianna had felt like ours; we had held her, fed her, and loved her, and losing her felt like the death of a family member.

We headed home the next morning. We had discussed pausing our time with Angel but knew adoption was the path for us, and we did not want to miss any further opportunities.

Exactly five weeks after our traumatic disruption, Angel called to let us know our profile was selected again. It only took a quick conversation for us to choose to move forward; if this was “the one,” we did not want to miss it. That evening, we spoke with the expectant mother, and while we were nice, we knew we were being cautious. She was weeks away from delivery, so we knew we didn’t have long to build a relationship. One week after our first conversation, we drove to meet her in person. During our time together, she shared with us her reasons for choosing adoption and that she had the birthfather’s support as well as that of her family.

Only two weeks after the day we spent together, the expectant mother called us after a doctor’s appointment and let us know she would be induced the next day. We left early the next morning and were able to spend time with her prior to delivery. We met her sister as well, who was her support person through labor and delivery. As we waited in our own room, we could not help but have flashbacks to the weeks prior. Would this be our successful adoption, or were we going to leave this hospital without a child as well?

The birthmother’s sister was the one to come and tell us the baby was here and was a boy! It was a couple hours before we met our son, Daniel Christopher. That night, DC spent the night with us, and we were terrified of becoming attached, still reeling with PTSD from our last disruption. The next morning, DC’s birthmother came to visit and asked if she could spend time with him. It was difficult to let him go, but after only 30 minutes away, a nurse brought him back to us and told us his birthmother was discharging from the hospital. We were shocked she was leaving so soon, but we understood she had a family to care for.

Once we were approved to discharge from the hospital, we did not head home right away, as we knew DC’s birthparents had not signed their consents yet. We could not stomach bringing DC home knowing there was a chance his birthparents could still choose to parent. We stayed at a hotel halfway between DC’s birthplace and our hometown. The following afternoon, we finally received the news that both of DC’s birthparents had signed and he was ours. In that moment, we allowed ourselves to feel everything we had avoided at the hospital. We felt like parents; we felt an immense amount of love for our son, and we felt complete.

We thought we were prepared for the adoption process. We took all of our education classes and we were financially stable, but nothing could have prepared us for the emotional trauma we went through. However, we know our disruption and faith in the adoption process led us to DC, who we cannot imagine our lives without. We are thankful every day that we chose to continue forward with adoption and not allow our grief to outweigh our desire to become parents.