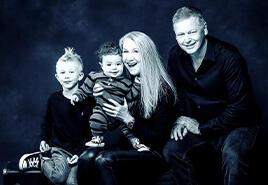 After we had our son Beckett, we knew our family wasn’t complete, but it would be years before we had the opportunity to grow. After a breast cancer diagnosis and successful treatment, we felt ready to continue family planning but knew biological children were likely no longer an option. Brooke had always had an interest in adoption, and we had discussed it on and off but never seriously.

As we started to seriously consider adoption, we found Angel and felt really comforted by the stories we read on their website. They gave us a great perspective as to what domestic adoption actually looked like, and it was seeming like a better fit each day.

When we shared with our family that we were going to be moving forward with adoption, they were very supportive but also reserved. They had typical reservations those that love you would have after hearing one too many “scary” adoption stories. We reassured them we had partnered with a great company we had full faith in.

While on vacation, we received our first call that our profile had been chosen by an expectant mother. We were incredibly excited and nervous, but it was reassuring to know our profile was working! We had been anxious about it going out and whether or not anyone was going to choose us. The expectant mother was early in her pregnancy, and we had a hard time imagining this relationship working out. As it turned out, we never ended up speaking with her; she stopped responding to Angel and never responded to us. Although the opportunity did not work out, having our profile selected helped validate for us that this was the process for us.

A couple months after the first opportunity, Angel called us with a second one. They shared with us that the expectant mother had selected a couple families to speak with before she made her final choice to move forward. We sent a quick text to introduce ourselves and then spent one and a half hours on the phone with her that evening. The expectant mother was absolutely amazing. She was funny, grounded, and stable, and she cared so much for her unborn child. We shared a lot of common interests and just clicked. We felt really hopeful after that conversation that she was going to choose us, but we wouldn’t get the final word until one week later.

In the remaining months leading up to the expectant mother’s due date, we remained in contact and continued to build our relationship. We started discussing her birth plan and making travel arrangements.

It turned out she was right. Her due date came and went, and a couple days later, she texted letting us know she was anticipating delivering that day or the next, based on how she was feeling. The following day, in the early morning, we received a text that she was in labor and on her way to the hospital. Due to hospital restrictions at the time, the expectant mother was only allowed one birth partner, and she chose Brooke. We reassured her that if she wanted the birthfather to be her support system, we completely understood and wanted to support her, but she told us it was important to her that it was Brooke.

Meeting at the hospital was the first time Brooke had met the expectant mother in person. It felt so good to finally hug the woman we had become so close with. Within one hour of arriving at the hospital and active labor, it was time to start pushing. Brooke provided as much support as she could to the expectant mother, and when our son Kaden was born, Brooke was able to cut the umbilical cord and was the first to hold him.

We were approved to discharge from the hospital the day after Kaden’s birth, and Ken was overjoyed to meet his son for the first time. He also greeted Kaden’s birthmother with a huge hug, which still didn’t feel like enough to capture the love we had for her.

While in Kaden’s birthstate, his birthfather was able to come visit and meet both Kaden and us, and it felt like closure for everyone. Kaden’s birthmother and birthfather were planning to move out of state shortly after he was born, and we weren’t sure if we would see them again in the near future. We ultimately ended up staying in Kaden’s birthstate for five weeks due to delays in the court system, but we were so grateful to be together as a family that the time passed quickly.

Since adopting Kaden, we have maintained a healthy relationship with his birthmother. We communicate with her monthly, she has remained a staple in our family. We have plans to see her in the future and hope to share some special milestones together.

Going through adoption was much different than having our son Beckett, but we would not have changed a step of our journey. Adoption required us to trust someone besides ourselves, which was not always easy. We tried to keep our emotions balanced while also being open with Kaden’s birthparents and being our authentic selves. We knew our family was not complete with just the three of us, but we never imagined how complete we would feel after adopting Kaden and meeting his birthmother.