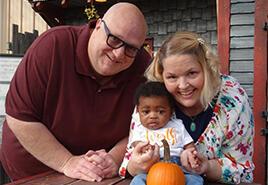 A Long Road to Adoption

As a child, Deb was diagnosed with a medical condition that left her without the ability to have biological children. She always knew becoming a mother would come through adoption in some capacity; she just didn’t know what that would look like. After we met and as our relationship became more serious, we had an honest conversation about what our parenthood journey would look like, and thankfully we were on the same page.

When we were ready to start family planning, we started researching adoption and adoption providers. We initially found Angel, but before we could join their program, a cross-country move forced us to pause the process. Once settled in our new home, we started researching again and nothing felt like a good fit until we rediscovered Angel. We spent just over one year fundraising for the adoption process and were finally ready to jump in.

Another Pause in Adoption

While we were excited to start the process, we were hesitant. We didn’t know what to expect, but parenthood finally felt like a reality. Not long after joining Angel’s program, we had our profile selected by an expectant mother. We only spoke with her briefly, and our relationship never really led to anything substantial. We knew this was a possibility, and we were just so excited to see our profile was working.

Not long after that first opportunity, we chose to move to be closer to family. We decided to pause our profile with Angel while we focused on the move and completed a new home study. When we were finally ready to come back to Angel, we were feeling more prepared than ever for our adoption journey.

A Breath of Fresh Air

We had a number of opportunities that all ended for reasons out of our control. One expectant mother chose to work with a more local option, two stopped responding to us once attorney services were hired, and one we had a phenomenal connection with and felt so much hope for miscarried. The miscarriage connection was the most difficult for us. Each opportunity prior to that had never felt that we had actually gotten to know someone, but with this expectant mother, we really started to connect and bond. Although we were devastated by the loss, it brought us a breath of fresh air and showed us the connection with an expectant mother could be positive.

Our next opportunity finally came after months of waiting when Angel contacted us to let us know our profile had been selected yet again and the expectant mother was due soon. We sent the expectant mother a text message to introduce ourselves, and we were able to communicate back and forth. We could tell how heavily this decision was weighing on her, and she shared with us how much she enjoyed our video. She was open about asking us how long she had to make her decision, and we reassured her to take all the time she needed. Only a couple days later, we found out from the expectant mother that she had officially chosen to move forward with us and had shared this with Angel as well.

As we spent the next couple weeks getting to know the expectant mother, we shared with her the name we had thought of for the baby, and unbeknownst to us, the name we chose was shared with members of her family. We then knew this adoption was meant for us.

We only lived a couple hours from the expectant mother, so we were on edge waiting for her to deliver. Her other sons had been born after their due dates, so we were anticipating the same. We received a text from the expectant mother one afternoon that she was cramping and that this hadn’t been something she had experienced before. We encouraged her to go to the doctor, but she was concerned about missing an appointment with the attorneys. We reassured her that her health and the baby’s health were top priority and that the attorneys could handle anything they needed after.

We went to bed that evening not expecting much, only to wake up in the morning to multiple missed calls and text messages letting us know the baby had been born! We called immediately, and she told us both she and her son were okay and were waiting for us at the hospital. We headed to the hospital and couldn’t wait to meet our son.

When we arrived at the hospital, the social worker brought us to meet our son’s birthmother for the first time. It was humbling to meet her in person, and we were in awe of her strength and courage. We felt as though we had written her a letter over and over again in our heads, and now, standing in front of her, none of the words we had thought of felt right. After meeting our son’s birthmother, we finally had the chance to meet our son, Isaac. After years of waiting and the long road we had to this point, it was surreal to meet him. As soon as we laid eyes on him, we both turned into emotional wrecks. We knew every difficult moment up until that point had been worth it.

Coming into adoption, we had thought we wanted a closed adoption and the ability to protect ourselves. With each expectant mother we got to know, even briefly, we knew maintaining a relationship was going to be more important than we ever could have imagined. Isaac’s birthmother was slow to communicate with us post-adoption, at least initially, but we have now heard from her a handful of times and are happy to have her reach out so we can show her our love and care for Isaac.

Throughout our adoption journey, we found ourselves having to lean on each other for support. When Steve was ready to give up, Deb propelled him forward and vice versa. It was also important that we found our village, those outside of ourselves that we could call anytime to lean on ways that we never imagined. We knew hope and faith were going to be what continued to push us forward and that the wait would be worth it. We had to learn to trust God’s timing, it was never early and never late; when it was meant to happen, it did. Had we focused too much on the end goal, we definitely would have missed the lessons and growth that adoption taught us along the way. We now know that in His timing, our dreams were meant to come true.