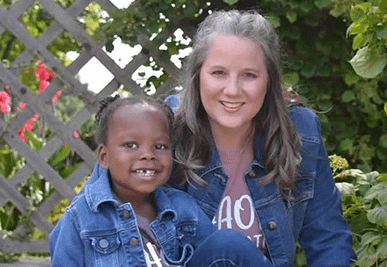 The Path to Motherhood

Having a family was something I always dreamed of, and I was excited when it came time to make those dreams come true. At the start of my path to motherhood, I had some infertility struggles in the beginning. It took some time to heal from that in many ways, so I ultimately decided private adoption was the route I wanted to take. As I was browsing social media, I came across an advertisement for Angel Adoption. I never click on things like this, but something told me to do it, so I did. I filled out all the information, and the next day someone called me from Angel.

After having an information meeting with an Angel representative, I felt really great about my future. The fact that they keep the number of families lower was something that stood out to me since I did not want to fall through the cracks at a larger agency. As nervous as I was to start my adoption journey, I was also feeling excited and hopeful.

I did not tell anyone right away that I was adopting because I was worried about what people would think. I wondered if they would judge me, and to be honest, there were some questions on my end that made me just want to keep things close at the start. No one in my family was adopted or had adopted, so because of the lack of experience, I was nervous.

Once I had started the journey, it had been mentioned that making a profile video would be helpful for expectant mothers. I wanted to include my friends and family because they are such a big part of my life, so that was the perfect time to tell them I was on my adoption journey to become a mother. They were all so supportive, and the messages and love I received made me feel silly for not doing this sooner.

The expectant mother did not have much prenatal care, so the due date ended up being wrong. She was quiet and more reserved, so I never knew exactly how interested she was in me. She then reached out one day to let me know she would not be reaching out and communicating with me and apologized for the lapse of communication. When I did not hear from her, I assumed this opportunity had faded. To my surprise, I received a text that said she was having labor pains, which was scary to hear since I did not know exactly how far along she was due to a lack of prenatal care.

She texted me a little later and said she had gone to the hospital and was in labor. They were admitting her which was a surprise since I thought she was only 20 weeks at the time. She ended up being much further along. I did not hear from the expectant mother for some time until a text came through that informed me a baby girl was born! I remember thinking to myself, “Is this real?” I was excited, shocked, and hopeful! She asked me if I would like to name the baby, and I stared at the phone in disbelief for what seemed like forever. I answered her and told her that I would absolutely love that.

I FaceTimed with the birthmother and asked how she and the baby were doing. She told me everyone was doing well; that was such a relief. I did not sleep much at all and could not wait to leave the next day. We FaceTimed in the morning, and this time she had the baby with her so I was able to see both of them.

I bought her first outfit in the airport and arrived at the hospital about 36 hours after she was born. I also needed to choose a name, so I went with Isabella because it was a beautiful name for a beautiful baby girl.

When I saw her, it was surreal. It took weeks for my brain to adjust to the fact that I was the mom to this beautiful little girl. She was tiny and beautiful. I remember being at Target buying diapers and breaking out in tears because I had wanted this for so long. It felt right, and everything fell into place as if it were always supposed to be this way.

My relationship with the birthmother has been wonderful, and we have an open adoption. I was scared of open adoption when I first started the process, but it is the best thing ever. When we visit with her again, Isabella will get to meet her half-brother, which will be a beautiful moment.

Adoption can be difficult and causes a lot of emotions, but live life as much as you can. Enjoy where you are in life and the things you might not be able to do once the baby comes. Living life made the wait a little easier. I would recommend not setting up the nursery either as that builds the excitement and makes it that much harder if there is a disruption and those waiting for adoptions need to be prepared that there will be disappointments before the right connection comes along. Setting it up once the baby comes may compact things and make it more challenging that way, but for me, it was the best thing for my heart as I didn't stare at an unused nursery and ruminate on any lost opportunities.

Stay hopeful, because this journey is worth it. If I would have given up, I would not have Isabella or her birthmother in my life. I will forever be grateful to her birthmother for providing me with the gift of motherhood. Being a mom to Isabella is my greatest treasure, even when she keeps me on my toes. She was always supposed to be my daughter, and I love her very much.