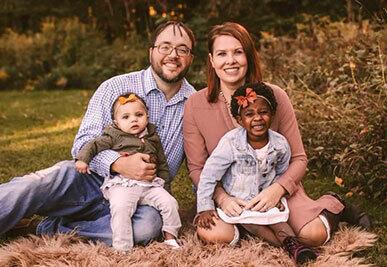 The Path to Becoming Parents

When talking about becoming parents, there was so much excitement. It was heartbreaking to find out that getting pregnant would not be a problem but Sheena’s body would not stay pregnant. We prayed a lot and felt drawn toward adoption. Our friends had adopted a child internationally, so we looked into that. The home study we obtained was for both a private domestic adoption or an international adoption.

Our pastor reached out to us because he knew we were looking into adoption and said that someone who attended our church had a family member who might be looking into placing their child. Child protective services were involved, but ultimately the mother wanted to do what she could to bring her child back home. So we looked into adopting internationally since that situation did not work out.

Around every corner, we would be met with issues, and we soon felt that it might be a sign international adoption was not what we were called to do. After more prayers, we felt that looking into domestic adoption might be best. Nathan researched adoption agencies, and Angel Adoption came up. We took it as a sign and chose Angel Adoption to help us become parents. Everything fell into place the moment we reached out to Angel, and we knew we had made the right choice.

Our family was excited for us but also did not know much about adoption since no one in our family had been touched by adoption. We were excited but also scared about the unknowns. The staff at Angel Adoptions was very helpful when answering any questions we had or calming any nerves and doubts we had along the way.

We waited almost the full length of our contract before being chosen, but we trusted the process. We knew we were called to be parents and that everything would happen when it was supposed to happen. Good things come to those who wait because near the end of our contract, we received a call one afternoon. Angel staff left a voicemail. Sheena could not believe it; an expectant mother had looked over our profile and wanted to talk.

Sheena called Nate right away and told him the good news. We were so excited and thankful for an opportunity. We had heard and read some horror stories about adoption and talking with an expectant mother, so we had no idea what to expect. Once we talked with the expectant mother, however, all our nerves went away. We quickly realized how amazing she was and how honored we were that she had chosen us.

A few weeks into communication, she wanted to Skype with us. Angel helped us know what to say and what not to say so we were prepared. She told Angel she chose us, and she also told us she wanted to move forward with us. Angel staff told us she might say she chose us but that did not always mean she was ready for the connection phase. Things felt natural and comfortable, so we let everything take its course.

The time had come to go to her state a few days prior to her induction date. We went to church and had dinner. It was nice getting to spend that time with her. Meeting in person makes the connection stronger, and we felt fortunate to be able to build such a nice relationship with her.

Once it was time to go to the hospital, we did not think we were going to be in the room. Her friend was going to be in the room to support her through the birth but did not make it in time. The expectant mother said she had changed her mind and wanted us in the room when the baby was born. It truly was amazing how building a relationship with her had allowed her the space to change her mind about things. For instance, she initially wanted a closed adoption, but after some time communicating, she thought maybe she would want a semi-open adoption.

Watching our little baby girl enter the world was magical and remarkable. It was scary because we knew to not get our hopes up because she could change her mind at any point. But we were so happy and in love once we laid eyes on Addison. Our hearts also broke for her birthmother because we could not imagine all the emotions she was feeling. She loved Addison so much and would sing to her when she held her. These are special moments we will cherish forever.

Our relationship with Addison’s birthmother is a healthy and respectful relationship. We told her we would send her any updates she wanted. She has reached out every few months. We told her she can guide us on what she wants and that we would be open to whatever she needs and wants.

The hardest part of navigating adoption is trusting the process. Things like that are always easier said than done. Inevitably, doubt creeps in because everything is out of your control. The unknown is hard, but in the end, everything is worth it and leads to becoming parents.

Everyone's situation is different, but it is important to not give up. Mentally and emotionally, you will be drained, but continue on, and remember why you chose adoption to begin with. Reach out and lean on Angel because they will always help you through it. Get a support group that surrounds you as well. Addison is beautiful, and we are so in love with her. We will always be thankful to her birthmother for making us parents.