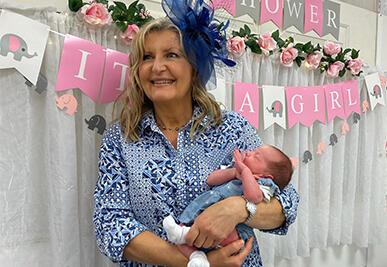 From a young age, I had dreamed of being a mom. Like many, I had a plan I believed my life would follow, and when it didn’t, I found myself considering how to become a mom without a partner. After initially pursuing IVF and learning that it wasn’t going to be right for me, I started considering all the other ways to become a parent. After years of research, losing my own mom, and prayer, I knew it was now or never to jump in and commit to adoption.

I found Angel through online research and connected with the fact that they had helped many other single women adopt. I loved that I saw myself represented in their success and trusted them with my journey.

By nature, I am not a patient person, and I knew that the wait for adoption was going to be difficult for me. After I had already waited years, the thought of waiting further was daunting. I took Angel’s advice and tried to focus on my life and myself, and while hard at times, it was helpful in making the wait go faster. I wanted to focus on putting one foot in front of the other and not forcing the process. It was hard, but I knew that this was out of my control; I had to let go and let God.

After eighteen months without being selected, I was starting to worry if this was going to happen for me. Just as I was starting to be concerned, my profile was selected for the first time. I was protective of my heart and tried not to get too excited. As it turned out, the expectant mother never responded to my outreach and stopped responding to her coordinator as well. I was fully prepared for this and wasn’t terribly upset.

Only one month after my profile was chosen for the first time, I was chosen a second time. This time, the expectant mother was responsive, and my first and only connection started. From day one, the expectant mother and I seemed to be on the same page. We both preferred texting over talking on the phone, and we had similar interests, were both planners, and seemed to click.

The expectant mother was already in her third trimester, and this was comforting to me. I had been so worried after watching a family member go through two adoption disruptions that a long connection scared me. When we were initially getting to know each other, there were a couple of times that I wouldn’t hear from the expectant mother for a couple days at a time, but I had to remind myself that I was not her only focus, that she was a single mother and would respond when she had the time. Thankfully, she always did, and we would catch up quickly. Through our conversations, the expectant mother shared with me that she was looking for a closed adoption, and while it wasn’t my first preference, I wanted to respect her comfort level. I reassured her that I was okay with it but that I was also never going to close the door on her should she change her mind in the future. She also did not know the gender of the baby and wanted that to be the adoptive parent’s decision. Although I was longing to know, I reassured her that the gender of the baby was one of the last true surprises in life, and I was 100% okay waiting until delivery. In the end, an ultrasound tech let it slip a few weeks before the birth and I was over the moon to learn it was a girl!

I found out that the expectant mother had officially chosen me and wanted to move forward with only eight weeks until her due date. Attorney services were hired, and I went into full planning mode. The expectant mother was great at keeping me updated after each doctor’s appointment and meeting with the social worker and attorney. It was comforting to have such open communication with her and be involved every step of the way.

Through the remaining weeks of the expectant mother’s pregnancy, we continued to refer to the baby as “Baby P.” The expectant mother had a daughter who was elementary aged and old enough to understand her mom was pregnant, but adoption was a new concept. While learning about dinosaurs in school, she learned that female pterodactyls used to sit on other nests to help other female pterodactyls hatch their eggs. In her young, sweet mind, she was able to correlate her mom carrying a child for another mom being similar to pterodactyls, hence “Baby P” was born.

I flew in the evening before her scheduled c-section with all the details I needed for the next day. I knew the hospital was providing me my own room once the baby was born, and it was planned that I would meet the expectant mother in her room prior to surgery. Meeting the expectant mother was so special. Her c-section continued to get pushed back, so what I thought was only going to be a couple of hours together turned into almost six hours. We talked about everything and anything, laughed together, bonded over our love for the baby, and built a lifelong friendship. I had no idea such a special friendship could form in such a short amount of time.

I had purchased the expectant mother a small gift, and her family had knitted the baby a blanket. As we exchanged gifts, it was clear how much we both deeply cared for not only each other but the baby between us.

When it was finally c-section time, the expectant mother was brought back while I waited. After waiting for what felt like hours but was probably ten minutes, it was finally time. I was able to stay close to the expectant mother during her c-section, holding her hand the entire time, and, with her permission, was allowed to meet my daughter, Ava, first. Seeing Ava for the first time was when it all finally hit me: I was a mom, and this was my beautiful daughter.

I spent the next couple hours with Ava and her birthmother in the recovery room before we were both brought to our own rooms. Although we had our own rooms, we spent almost all of our time together, the three of us.

Both Ava and her birthmother were discharged from the hospital on the same day. Up until the moment she was brought downstairs, we were holding hands and crying together. What started as a closed adoption has turned into a mutually respectful, lifelong relationship. Over the course of our hospital stay, we bonded and became good friends, developing a true love for each other. It was difficult to imagine the days ahead without Ava’s birthmother by my side, but I knew our special relationship wasn’t going anywhere.

Ava coming to me was a two-year journey. It wasn’t always easy, but it was so worth it. I prayed daily for an adoption like the one that I had and a birthmother as caring as Ava’s. My heart is full, and my dreams of becoming a mother have come true. I cannot express enough the love, blessings, and gratitude to my daughter’s selfless birthmother who chose life and gave me the greatest gift I have ever received. She will always be part of our family.