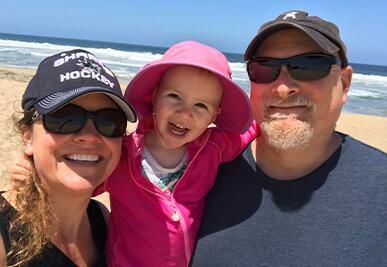 After struggling with infertility, we chose to move forward with adoption. We agreed to each do our own research and bring our top adoption providers to the table to compare. It just so happened that Angel was at the top of each of our lists, and it felt like a sign to reach out to them first. As we shared with our friends and family our decision to adopt, everyone was incredibly supportive. They of course had tons of questions and always asked if we “had anything happen yet,” but we knew it was coming from a place of love and excitement.

Once officially in Angel’s program, we put a lot of thought into our profile. We really wanted it to represent who we are, and we wanted our genuine selves to come through. From the verbiage we wrote to the photos we shared, we didn’t take any of it lightly. We tried to share as much of ourselves as possible and hoped for the best.

The Drive of a Lifetime

After close to eight months without an opportunity, we finally got the call that our profile had been selected. Kim was the one to receive the call, and initially she thought it was Angel calling to introduce us to our new coordinator. Instead, it was the call that would turn our world upside down. Our profile had been selected by an expectant mother they knew very little about except that she was already 40 weeks pregnant and having a baby very soon, was only five and a half hours from us, and wanted us there for the birth. Kim was floored! When she called to tell Jeff the news, she was crying so hard he thought someone had passed away! After composing herself and finally explaining what was going on, we both knew we were all in.

We called the expectant mother and left her a message while at the same time preparing to leave and drive south. We figured at the very least, we might be able to meet her the next day, and at the very worst, if things changed, we had only wasted one day driving there and back. While at the gas station filling up for our drive, the expectant mother called us back and seemed so relieved we had taken it upon ourselves to start traveling to her. We were so nervous that it was going to seem presumptuous of us, but as it turned out, it was exactly what she wanted. As we drove, we continued to keep the expectant mother updated as to where we were, and she shared with us that she had gone to the hospital, which was where we were going to meet her.

We got to the hospital just after midnight and met the expectant mother, her mom, and her best friend. They were all in the waiting room together waiting for her to be taken back into a room where it would be decided if she was going to have a baby today. After only a couple of minutes together, the hospital staff took the expectant mother and her mom back, leaving us with her best friend, whom we chatted with. No more than ten minutes later, the expectant mother’s mom waved Kim over and snuck her back into the room. The expectant mother told Kim they hadn’t gotten to talk much, and she wanted to get to know her better. Conversation from that point forward flowed easily, and we had so many coincidences pop up. For example, the expectant mother’s last name was Kim’s mom’s maiden name, and Jeff and the expectant mother’s mom shared a birthday. We eventually snuck Jeff into the room as well, and when he walked in, he said it felt like walking into a conversation with old friends; everyone was talking and laughing and so comfortable. We were eventually given a large room together and stayed up the majority of the night talking.

The following morning, the expectant mother was finally induced. We did not know the gender of the baby, and in fact, the expectant mother had not known she was pregnant until close to the start of her third trimester. During the evening, she had shared with us that when Angel initially sent her profiles, she didn’t find a family that stood out, so she took it upon herself to scroll the website, which is where she found us. She loved that our favorite bands were her and her brother’s favorite bands; she said our home looked similar to her home growing up and that it was evident we loved to laugh. We had spent so much time worrying our profile was too plain or ordinary, but as it turned out, we were exactly what she was looking for.

As we got closer to delivery time, the expectant mother’s mom had to leave, which was really tough for the expectant mother. Her other children needed to be cared for, and the babysitter had to leave. We were happy to step in and support her but recognized how difficult it was for her. We tried to keep her as calm as we could through labor and coach her the best we knew how. She had already asked if Jeff would cut the umbilical cord, and he immediately said yes.

Keagan spent the first hour on her birthmother’s chest, and then it was our turn. We were in love instantly. She was so strong, so alert, and so perfect. We had booked hotel rooms nearby and went back there each evening while Keagan stayed with her birthmother, but we spent each day together, the four of us.

The following morning, Keagan and her birthmother were discharged, and we all left the hospital together. After Jeff dropped Kim and Keagan off at the hotel, he drove the birthmother to her hometown to meet her mom. We have the most special photo of us together in the car and treasure it.

Coming into the adoption process, we had been fearful of what a semi-open or open adoption might look like. We had so badly wanted to become parents and, at the same time, did not want to share that experience. However, now that we had met an amazing young woman who loved our daughter as much as we did, we could not deny her, us, or Keagan anything but an open adoption.

Remembering How We Came to Be

Keagan is our greatest joy. From the moment we met her, she has felt like ours. We often forget she is not biologically ours; she is so ingrained in who we are. And while we may forget she is adopted, we will never forget the strength, compassion, and love her birthmother showed in placing her with us and the pivotal role she played in us becoming parents.