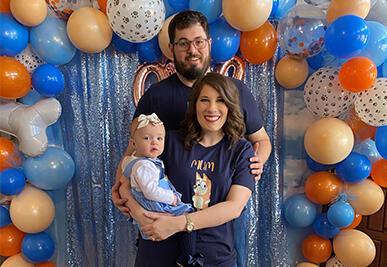 Whenever we spoke of our future family, it always involved both biological and adopted children. We have had friends and family both adopt, and we always thought it was a beautiful process. After trying for biological children for a number of years with no success, we found our hearts being led to adoption sooner than we anticipated.

Hope dove in to learning as much as she could about adoption. We knew we wanted to raise a child from birth, and the idea of working with a national provider really piqued our interest. Once Hope found Angel, we felt a connection to both their name and program. It felt like it was meant to be.

Seth was ready to share the news of our adoption journey with everyone, but Hope wanted to keep it a little quieter. We compromised and, of course, told our immediate family and then a select handful of close friends. We didn’t know a lot and didn’t know what we didn’t know, so there wasn’t much to tell, but it felt great to have everyone’s support.

After waiting for six months without being selected, we started to consider making a video. This was something Angel had suggested, but with the upcoming holiday season, we decided to hold off and see what the next couple of months held.

Only days into the new year, we received the call that would change our lives: Our profile had been selected by an expectant mother. It was shared with us that she had selected us and one other family, and she was due in two months. We knew she had a child she was parenting, and she was interested in communicating with us right away.

Almost immediately, Hope and the expectant mother had a connection. It felt as though she was an old friend. We found out she had seen our profile online, and after clicking out, the website kept refreshing to us again and again. She’d been praying for direction in her pregnancy, and this felt like a sign that adoption was what was best.

As we spent the next couple of weeks getting to know the expectant mother, we knew she was also still talking to the other potential adoptive parents. She had expressed to us her fear of disappointing someone, and coincidentally, each time she was feeling nervous or overwhelmed, Hope happened to reach out to her at the perfect time. Late one evening while Hope was still at her office, we received an email from Angel that the expectant mother had officially chosen us. Hope, both overwhelmed and overjoyed, started crying, startled her coworkers with her excitement, and then called Seth.

Once we were connected with the expectant mother, she started sharing ultrasound pictures with us and more regular doctor appointment updates. It suddenly felt so much more real that this could be our daughter. Hope went into full planning mode and started getting a nursery ready and purchasing baby items here and there. While we thought we had two months before her due date, we knew there was a risk of her delivering early based on her previous pregnancy, so we wanted to be prepared.

One afternoon while Hope was out of town for work and Seth was out of town for a bachelor party, Hope received a text from the expectant mother that she was going to the hospital for a check-up and to put her official c-section date on the calendar. As it turned out, they scheduled her for a c-section the following afternoon. We had so desperately wanted to be there for the birth of our daughter, but with us both being out of town and nothing packed, we knew it was unrealistic to be there in time.

Thankfully, the expectant mother had a friend who was able to take her to the hospital and be her support person. While we weren’t able to be there, she was updating us on her progress, and when our daughter was born, she sent us our first photos of our sweet girl, Mya. It was surreal to be seeing our daughter for the first time so far away from her, but we knew we would be on our way to her soon. At the same time, it was so special to us that Mya got to spend the first three days of her life with her birthmother, time we knew she would never have again.

The hospital had advised us that we would not be able to see Mya for the first three days of her life due to her being so small, so we took those days to return home, pack, make travel arrangements, and finally head out. We boarded our first flight and, with zero complications, made it to our layover destination and had dinner. We boarded our second flight and took off with no issues, but after realizing we had been in the air for longer than we should have been and that we were making circles, we started to wonder if something was wrong. Not long after, the pilot came on and let us know our destination airport was too foggy, and we were headed back to our original airport to spend the night. We were crushed. We were only hours away from meeting our daughter, and now we were another full day away from her. We were also so concerned Mya’s birthmother might think we had gotten cold feet and were backing out, which was so far from the truth.

The following morning, we made the trip once again, this time successfully. After landing and getting our rental car, we drove straight to the hospital to finally meet Mya. Mya had spent the last three days in her birthmother’s room, so we were able to meet them both at the same time. After spending the last six weeks talking to Mya’s birthmother, it was amazing to meet her in person. We had put so much pressure on ourselves before walking into that room, wanting to make a great first impression and making sure she knew how much we loved and respected her, but the moment we walked into her room, that all fell away. Our world was instantly changed. Seeing Mya with her birthmother, we saw the sacrifice she was making and how we were benefiting from it. Our hearts were both heartbroken and bursting with love all at once.

We had some alone time that first day with Mya while her birthmother got some much needed rest. Mya was so small yet so perfect. We were invited to stay at the hospital the first night, but her birthmother wanted one more night with her and we wanted her to have that. That evening, Mya’s birthmother met with the social worker, and unbeknownst to us, the social worker questioned her decision to place with us, a non-biological family member that didn’t live in her state. Mya’s birthmother stood firm in her decision, and when she shared this with us the following day, we reassured her we had no intention of cutting her out of our life. In fact, we wanted the opposite; we wanted her as involved as she was comfortable being. We let her know the social worker was a go-between, not a spokesperson, and we wanted Mya to know her birthmother and birth story and to have as much love around her as possible.

Mya has been our biggest blessing, alongside her birthmother. It is rare we go more than one week without checking in with her and sending her an update and photos. We have future plans to spend a long weekend together, and we are excited and nervous. It is a strange feeling to know there is another parent out there for your child but how special and awesome to know how loved Mya is by her birthmother.

Compared to other adoption journeys, we know ours was quick and relatively easy. We reminded ourselves to keep faith throughout, and it helped immensely. It would have been easy to feel hopeless after years of struggling, but we never felt that way through the adoption; we always felt hopeful. We knew the process didn’t have to be perfect, but it was always going to be perfect for us.