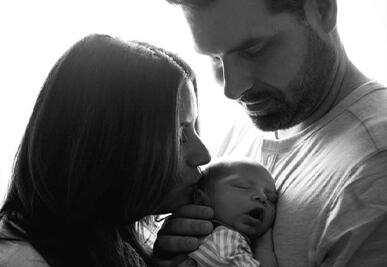 When we started dating, the topic of adoption was always something that came up. We always knew it would be a part of our plan. Fertility issues and concerns with our age made this the best option for us. Courtney was familiar with adoption as she had family who had adopted and been adopted. When we began our research, choosing Angel Adoptions was the easy part. We were eager, nervous, and ready but not prepared for how much paperwork was involved!

We started out and were chosen quickly. It was wild getting that first call; we just could not believe it was happening. It started with us talking to the grandmother for some time. We would not get to talk with the expectant mother for a while, and the birthfather did not have any involvement. We eventually met in person, even going to doctor appointments. Eventually the expectant mother chose to parent. This opportunity gave us the biggest learning experience we could have. Obviously we had our emotions about the opportunity not working out, but we knew we had to remain hopeful.

About a month later, we were lucky to be chosen once again. We received a call that the expectant mother wanted to set up a time to talk the next day, Courtney’s birthday and one she will never forget. We hit it off right away. She was really shy, was 13 weeks pregnant, and at first was set on having a closed adoption, but we quickly grew closer by texting often, doing video chats, meeting in person, and going to doctor appointments.

We were thankful to have family in our lives who continued to support us, but the one person who made us the most confident throughout was the last person we expected: the expectant mother. Here she was, pregnant, sick, with other children, and with a thousand other worries, but she was always confident in us. We just thought she was amazing; she was our biggest cheerleader.

She was set to be induced, and we headed to meet her at the hospital. Unfortunately, there was some rough weather coming in and she was worried about how she was going to get to the hospital, so we offered to take her. The weather passed, but she still asked if we would come and spend time with her and her family and take her to the hospital. Of course we would! We made our way to the hospital, where we watched movies, listened to oldies, talked, and just simply spent time together. It was such an amazing experience to be able to bond with her.

We were so impressed by how peaceful she made this experience; her delivery was impressive and incredible. Courtney was in awe of the strength and ease that the expectant mother had throughout. Before we knew it, Viggo was here! There are no words that could describe how we felt; it was simply unbelievable. Once Courtney was able to hold Viggo, she was not letting go, giving Jimmy only a few minutes to hold him before she snuck him back into her arms.

Courtney and the birthmother shared an unforgettable, beautiful moment of just the two of them lying together before she was discharged. This moment is something Courtney will cherish forever. The birthmother visited with Viggo once more before being discharged, and we had yet to tell our friends and family about Viggo. We started to share the news through FaceTime, and everyone was shocked, excited, and overjoyed!

The hardest part for us was the 30-day revocation period. The birthmother had stopped talking with us after she had left the hospital; we knew she needed space and understood. It did make those 30 days feel like 85 days though. We were tired, taking care of a baby, and trying our best to stay distracted, but we found it hard to not have thoughts in the back of our minds about the what ifs. Starting out, the birthmother wanted a closed adoption but was so surprised to see how much we all had in common and how well we all got along. We now have an open adoption, and we send monthly updates to her and her family.

Reading these success stories truly helped us when going through the process. We got as much information and advice while starting out as we could. Take the help, ask questions, and build relationships with the professionals. Remember, it is a journey. It is not a race and can take time. We had to remind ourselves to slow down and relax, which was hard to do at the time. Luckily for us, we got to the end of the rainbow by not being scared to take the risks.