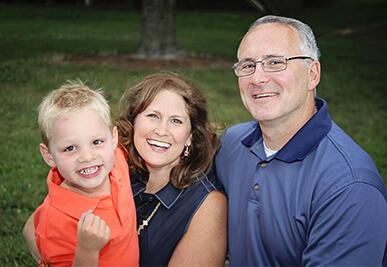 We were married for a few years before we tried to start a family. We were met with a huge disappointment when we found out we had infertility issues. The options we had just did not feel right for our family. Michelle was driving down the road one day, and there was a big billboard about adoption. Michelle does not remember anything specific about the sign other than it opened her eyes to see there was an option that could allow our family to grow.

Michelle’s cousin was adopted, so we were familiar with what a gift adoption could be. Michelle researched adoption companies, and Angel Adoption was the first one that popped up. Something that we loved about Angel Adoption is that it was local to us and was smaller. We did not feel like we would get lost in a big company and knew we would be more than just another number.

We were excited to tell our family and friends about our decision to adopt. Michelle sent out letters to everyone telling them we were growing our family and requested they send a letter along with a piece of fabric. Michelle took the fabric and made a quilt for the baby along with saving the letters in a book with a small piece of fabric attached to each letter so the child would know whose fabric went with what letter. Everyone was supportive of our decision, which made us more excited to start our adoption journey.

Starting the journey, there are so many things to cross off your list, like the home study and creating your profile. We were nervous and scared because there were so many unknowns. We tried to learn as much as we could about the different adoptions and other adoption-related topics. We wanted to start our journey making the right choices for our future family. We would find ourselves changing what we thought we wanted throughout the home study process.

Once our profile started being presented, we had to wait what felt like a lifetime before being chosen. We got a call that an expectant mother chose us, and we talked a few times. One day we stopped hearing from her, which was hard because we were so excited for our first opportunity. We then were chosen again, and this expectant mother had seven children and some she had placed for adoption already. We talked and got to know each other and were soon moving forward to the connection phase.

We hired an attorney but the expectant mother never met with them, and we never heard from her again. We took that pretty hard and felt like we needed a break. It was almost the end of our contract, and we asked if we could go on hold and pause everything. While pursuing adoption, we had put life on hold essentially because we did not want to miss a call or opportunity.

While on hold, we went to Disney and tried our hardest to enjoy ourselves and not think about adoption. Once we took a much needed break, we were ready to resume our adoption journey. We extended our contract for six months and received a call that an expectant mother who was due around June wanted to talk with us. She had just found out she was pregnant and had not had prenatal care yet. We loved talking to her on the phone since she had a beautiful Southern accent.

Getting to know the expectant mother was amazing. We would talk or text, and we tried to learn as much about her as we could so, if chosen, we would be able to share who she was with the baby. As much as we loved getting to know her, we were feeling nervous as we inched closer to the end of our contract again. As we were updating our home study, we received a text around lunchtime from the expectant mother. She let us know she was in labor, so Michelle called her and verified when she would want us to travel there. The expectant mother said we should get to the hospital right away. Michelle called to try to tell Michael, but he worked in construction so she called her father-in-law, who was able to reach him.

We drove through the night 12 hours straight and arrived at 6 a.m. Once we arrived, we were met by the nurse, who was also an adoptive mother, and she gave us a big hug. We felt so welcomed, and the nurse put the most beautiful baby boy into Michelle’s arms. At that moment, Michelle was trying to guard her heart, but there was no question; he fit perfectly in her arms. We did not know how we would feel holding someone else’s child, but from the first moments, he always felt like ours. Sweet baby boy, Mason!

We were glad we had some time to get to know the birthparents while they were in the hospital. The birthmom was so sweet and ordered us lunch the next day before getting discharged from the hospital. We would continue our friendship on Facebook. We often send updates of Mason for them to see how he is doing. Mason is now older and the other day asked if he would be able to visit his birthfamily because he really wants to meet his brother and sister. We told him we would reach out and try our hardest to make that happen.

When navigating adoption, you never want to take anything for granted even though the wait can be so hard. People would say to us that everything will happen when it is meant to happen. That was hard to understand at the time, but now we understand that to be so true. We believe Mason was meant to be ours because he ended up needing resources for some special needs, and we don’t believe he would have had access to those things otherwise. We are so in love with him, and he is a part of not just our family but our hearts. We are forever thankful for Mason’s birthmom for making the best decision she could for her son.