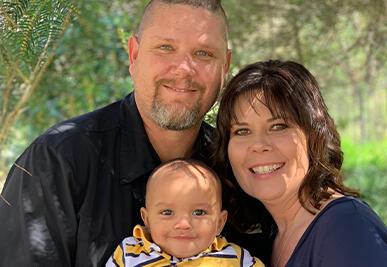 After doing some research, we came across Angel, and based on the success rate, we knew we had found the right place to help us grow our family. We appreciated how much they value the expectant mothers and the support they give the adoptive family.

Starting out, Duane was expecting to be chosen right away, yet Nakia was preparing to wait. We were actually chosen multiple times; however, things didn't work out as we hoped they would, and we soon found ourselves reaching the end of our contract with Angel. We had been so busy with moving to another city, starting new jobs, home projects, and traveling that we were able to keep ourselves occupied and stayed positive throughout that time. It was helpful that a big chunk of our time was spent with an expectant mother for almost seven months. We spent time building a relationship with her.

We did grow nervous, but with the continued support of Angel, we were able to extend our contract and were chosen by our third expectant mother just as the extension in our contract was nearing the end. It was a Friday afternoon at 4:55 p.m., and the last thing on our minds was that Angel Adoptions would be calling. It was a wonderful surprise that led to us texting the expectant mother all weekend; by Monday we were hiring legal services. It turned out that she had chosen another couple and that she also spent around seven months growing a relationship with them; in the end, the family changed their minds. This left our expectant mother just days to find a new family. Thankfully that family was us, and we were thrilled to be a part of this adventure with her.

We were aware she was going to be induced, so we made plans to travel and be there in time. The baby had other plans, however, and the expectant mother’s water broke. She called us to let us know, and we rushed to the hospital. Thankfully the expectant mother had her sister there with her for support. We sat in the hospital all day just waiting for updates. We did not know how anything was going to go. We were in the room next to her but had no idea what was going on, and our emotions were up and down.The expectant mother did her best to text us with updates between sleeping and trying to stay comfortable.

Eventually she had to be taken for an emergency C-section, and after 12 hours of anxiously waiting, we were taken to meet Miles. We were so hesitant to hold him. We asked the staff if it was okay, and they said, “Of course, he is yours!” Miles’s birthmother held him for some time as well, and over the next two days, we all spent time together. It was so surreal, and we were excited but cautious knowing anything could change. Those two days we spent together were the hardest part of this process. We struggled with feeling like we were walking a tightrope. We had just met; she knew nothing about us, and we knew nothing about her. We never wanted to overstep or make assumptions. We made sure to support each other and the birthmother. Knowing that this is about her and keeping her feelings in mind was very important to us.

The Name Says It All

While still in the hospital, we had a really great heart-to-heart conversation and left everything up to Miles’s birthmother to determine how our relationship would look moving forward. We let her know we never wanted to catch her off guard or upset her if by chance she was having a hard time. We wanted her to know we welcomed any relationship she would like to have, and to this day, we continue to stay in touch, sharing updates and pictures.

Miles’s birthmother is amazing, and not only did we get the perfect baby but we added the perfect birthmother to our family. During that short time we had to get to know Miles’s birthmother, we learned she would call him baby Rio, which means river in Spanish. This was because the river was her place of peace, where she went to find joy and tranquility. Naturally, we had to include this in his name: Miles Rio. She was able to not only gift us but also Miles with a name he will have all his life that holds such a great meaning behind it.

You hear everyone telling you to trust the process, and we didn’t even know what that meant. We now know that all of this is out of your control; things are happening behind the scenes that you don’t even know about or need to know until it is time. Don’t sit around and dwell on this. Whether it is one month or 24 months, you will never get that time back. So take that vacation or new job offer, move, and just spend time together and accept what is meant to be will be.