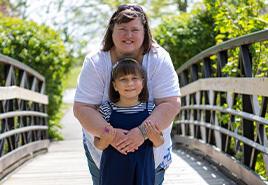 My Path to Adoption

I always knew adoption could be a path I might take as I have several family members who have adopted. I am a single woman and was approaching the time in my life when I had hoped to have a child, so I knew adoption was the right choice for me. I always knew I would love the baby just as much as if they were my own biological child. Plus I knew my family would be 1000% on board, which was really important to me because I am very close with my family, especially my mother.

I had previously worked with another agency I just did not feel connected with. They even told me I would likely never be chosen by an expectant mother, and I felt so devastated. I really felt like this would never happen and could be over for me already. My mom was so supportive during this time. She said this was not the end but just the end with this agency.

I ended up finding Angel Adoption through my social worker, who I had an amazing relationship with. I was still not sure if I would ever adopt because of what happened at that other agency, but then I talked with other adoptive parents who had worked with Angel Adoption. I called Angel Adoption, and the amazing conversation I had with them solidified my choice that this was the right place for me. I felt a connection I had not felt before, and I had hope and faith again!

Someday Everything Will Make Perfect Sense

I had a connection with an expectant mother shortly after joining Angel Adoption. Unfortunately, that opportunity did not work out. At first it was hard, but I also knew the baby who was meant for me was still out there, and she was! I had read a lot, done a lot of research, gone to seminars, and talked to many other adoptive parents and birthparents in an effort to prepare myself for this potential part of the adoption journey as much as possible. I remained hopeful.

When It All Made Sense

Not too long after this, I got a call that another expectant mother wanted to talk with me. I was so excited and ready! She was due in just a couple of months, but we were able to get to know one another very well during that time. It just felt right. I felt a connection with this expectant mother and was excited and very hopeful. She chose to move forward with me, and I was so thrilled and beyond thankful for this opportunity!

When I got the call that the expectant mother was in labor, my mother and I left right away to travel to her. She had given birth already by the time we got there, and this was my first time meeting the birthmother in person. When I walked into the hospital room, she was holding a beautiful baby girl in her arms. I will never forget this moment! She said to me, “Would you like to hold your daughter?” I cannot imagine the amount of courage and strength this must have taken. This baby girl was not mine at that point—she was still hers—and I wanted to respect that. I wanted to give her the time she deserved.

I did end up holding the precious baby girl, whom we named Liz. I had this calm feeling I did not expect to have. I was still having a hard time believing it was real and was trying to be present yet cautiously optimistic.

Liz’s birthmother asked to spend time with her at the hospital, and she kept Liz in her room with her during her hospital stay. Liz’s birthmother offered for me and my mom to stay with Liz in her hospital room as long as we were there. I wanted to respect the birthmother’s feelings because I wanted to make sure we could have the relationship we both desired one day if she ultimately chose to place the baby with me. When Liz’s birthmother was about to be discharged, she was having a lot of emotions, which I completely understood. I told her to please not make any decisions based on me and not to worry about my feelings. She needed to do what was right for her and her family.

That day, the three of us left the hospital. We spent some time together privately, just Liz’s birthmother, Liz, and me. We held each other and hugged and cried. I would never change that moment for anything.

My biggest piece of advice for prospective adoptive parents is to reach out to your home study social worker for support. Also, do a lot of research from both the birthmother’s perspective and the adoptive parents’ point of view. I did not have a one-sided mind because I had read books and attended seminars. I was not jaded because I had a good understanding of both birthmother’s and adoptive parents’ feelings, as much as I possibly could have. I would also say to keep busy! Find things to take your mind off of the wait, and know that what is meant to be will happen when it is meant to be.

Liz has always known she was adopted and where she came from. A photo of all three of us is in her room. We talk every day about her birthmother, and I always make sure she knows she is loved by her birthmother and why she chose adoption.

We text with Liz’s birthmother weekly, and I always keep her informed about what’s going on in Liz’s life. We have not yet met up in person since leaving after ICPC, but we are talking about it, and I’m very much looking forward to the day when the three of us can meet again!