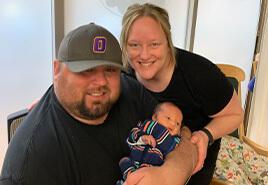 We tried to get pregnant for 12 years, including multiple unsuccessful rounds of IVF. During those 12 years, adoption was something we had thought about, and we finally decided it was time. The thought of giving a baby a loving, caring home is what led us to begin our adoption journey. We found Angel after doing a lot of research, and we decided we really liked the aspect of advertising our profile and the layout of Angel’s process. Most importantly, we were drawn to Angel because of the support they provided expectant mothers.

Obviously, the first month or two after our profile was live with Angel, we were feeling so many emotions! We were anxious, excited, hesitant, and constantly checking the website to see how we were being presented. Once the newness of everything faded a little bit, we were able to take a step back and take on the mindset that we were going to continue living our lives fully and trust that in time, we would have an addition to our family. The waiting process was made easier for us by our amazing support system of close friends and family. Everyone in our lives was so excited for us.

Our First and Only Connection

When we were first introduced to Jaxton’s birthmother, it started off great! It was really important for us to respect and honor her comfort level at that time, which was to only communicate through text messages. We built a strong foundation with each other right away, which we would end up leaning on during those next few months. After our first few conversations, she went kind of quiet and was unresponsive, which would make anyone worry. We really had to trust the process and trust her with what she was going through.

Once we heard from her again, she was ready to proceed with the adoption process, so we began working on that for her. There were a lot of unknowns, and we wanted to be able to support her as much as possible. Regardless of her choice, we were going to be there for her. She had a C-section scheduled, and we chatted a few weeks prior. Since we knew how she was feeling and her history, we had a gut feeling Jaxton was going to make his arrival early, and we were ready to go just in case!

Just one day after meeting with her social worker for the first time, she called us because they were wanting to do the C-section that day. She was able to schedule it for the following day. This gave us less than 24 hours to drive halfway across the country, which we happily did!

We were so anxious and excited during our drive to meet Jaxton. Every step of the way in this process is so exciting, but you have to remain cautious as well. There are so many steps you have to complete before you’re finally at the “finish line” and we kept telling ourselves after each step that we were “one step closer.”

We met Jaxton’s birthmother in the hospital waiting room before her C-section. We were so happy to make it there in time and have the opportunity to meet her. She asked us to be in the room with her when Jaxton was born, and it was the most amazing experience we could have imagined. The love we have for somebody we don’t know or only met one time…there are just not enough words.

Meeting Jaxton for the first time was indescribable. We tried to start our family for so long, and the number of times we heard, “Everything happens for a reason,” or “The right baby and moment will come,” left us rolling our eyes. But it is so true. We were exactly what Jaxton’s birthmother was looking for—an older couple with life experience—and it really was perfect in its own way.

Since she had a C-section, we made sure to send her updates and pictures those first few days while she was recovering. She had made the decision not to meet Jaxton, but we wanted to give her as much reassurance as we could that he was very much loved and doing well.

At this point, we have a semi-open adoption with her, and we are open to whatever she wants when it comes to communicating. We’ve reached out again since being home with some updates, but we also want to honor her space and healing process. We are always here for her and look forward to communicating more in the future.

It’s common to worry about how you’ll be as adoptive parents. We thought about the connection we would have with an adopted child for so long, but once we met Jaxton, we couldn’t imagine feeling any differently whether he was biologically ours or not. Now we can’t imagine Jaxton not being our child.

One of our biggest challenges was trying to be prepared for any situation. Angel tried to prepare us as much as possible, but at the end of the day, every state has a different process and every adoption experience is unique. It’s hard to be prepared for some of the financial necessities that come along with it, and we had to throw everything together rather quickly. Obviously we relied on each other and our support system, and we reminded ourselves every day that “what will be will be.”

Our advice to other adoptive parents: Everything happens for a reason. We hated to hear that sometimes, but it’s so true. Trust the process. The perfect baby will come.