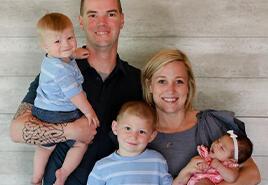 The Push We Needed

We always imagined having children right away; however, after struggling with infertility early in our marriage, we started to see that our path to parenthood was going to look different. We started researching adoption and started the process with a small local agency. Our relationship with the local agency never felt right, and we decided to pause our adoption plans. We turned our focus to our careers and additional schooling. and a number of years later, Annie’s parents encouraged us to reconsider adoption.

We had friends who were working with Angel at the time and started our research with them. We found we had a much better connection with them than the first provider, and we were officially ready to get started!

We were equally terrified and excited to be finally starting our adoption journey. We had so many doubts about ourselves and if we would find the right connection, but with the support of our parents and our own desire to become parents, we jumped in.

We had another opportunity with an expectant mother and thought we had built a strong relationship with her. Prior to hiring attorney services, we flew to her home state to attend an ultrasound with her, but she did not show up to meet us. We knew booking tickets was risky, but through this, we learned just how big of a risk the adoption process was going to require us to take.

We continued to push forward with the process, still having faith this would work for us. Our profile was chosen once again by an expectant mother, and we had the chance to speak with her a number of times and meet with her in person. We went to her state for the birth of her son and had dinner with her the evening before her induction. The morning we were preparing to go to the hospital, the expectant mother called us and let us know she was choosing to parent at the pressure of a family member. We told her we wanted to support her, and if parenting was the best choice, then we were supportive. We never went to the hospital to meet her son, and while she shared photos with us and stayed in contact, we ultimately had to stop communicating with her. Emotionally, we were devastated and knew that for our own mental health, if we weren’t going to be adopting her son, we could not continue to maintain a relationship.

As we attempted to recover from our traumatic disruptions, we knew our time with Angel was limited. We still had time remaining on our home study, so we chose to stay with Angel through the duration and see what would happen.

When Angel contacted us with our next opportunity, we were cautiously optimistic. We were still reeling from the disruption but also still so badly wanted to adopt. The expectant mother who had chosen our profile was due within the week, and as soon as we spoke with her, we knew she was different. Our conversation was easy; she was interested in us and was open to us learning about her. Although it was nearing the end of her pregnancy, she involved us in her remaining doctor appointments from afar and seemed to really be prioritizing her adoption plan.

The following week, we received a text in the early morning that the expectant mother was in labor and headed to the hospital. We quickly booked our one-way tickets and headed to her state. As soon as we arrived at the hospital, the nursing staff was wonderful to us. They knew who we were, and the expectant mother had been very open with them about our role in her pregnancy and birth plan. It was surreal to us that she was so decisive and really seemed to be moving forward with adoption. We were able to be with the expectant mother while she labored and were present when our son, Max, was born that afternoon. Meeting Max was a dream come true. We could not believe we were finally parents.

We spent our time in the hospital with both Max and his birthmother, all really getting to know each other. Max’s birthmother made him a blanket she sent home with us, and it’s a gift we know he will cherish forever. Prior to heading home, we were able to spend one more afternoon with Max’s birthmother, and it was her time to say goodbye to both us and Max. We knew it was not goodbye forever but more of a “see you later.”

Since Max’s adoption, we have seen his birthmother in person once, with more visits planned for the future. We have remained close, and when Max was two years old, we had the important conversation with her about the possibility of our family adopting a second time. She told us she knew Max would make a wonderful big brother, and that was all we needed to hear to jump back in.

It was, once again, Annie’s parents who nudged us back to adoption. With their insistence and Max’s birthmother’s encouraging words, we decided to join Angel’s program a second time. As we worked through our home study and a new profile, we had a feeling this time our journey would be different, but we never could have predicted how different.

After such a long journey to Max, we were hoping for a shorter second adoption. Only three months into waiting, Annie received a call from who she thought was someone from Angel, but there was no voicemail, so we didn’t read too much into it. Later that same day, we received an email from Angel asking us to call, so Steve called to check in and found out we were being presented an opportunity with a birthmother whose son had been born five days prior. As Steve was gathering details about the baby, he assumed we would be traveling, but much to our surprise, the baby was only a half hour away at a children’s hospital.

The baby boy had been born five weeks early in a smaller hospital and needed care from a larger facility. We found out the birthparents had learned about our family through a mutual connection, and when faced with the choice of adoption, they contacted Angel and told them they wanted us to adopt their son.

Before we were able to head to the hospital, we had to wait for the proper approvals. It was two full days before we received approval to go to the hospital, and those two days were pure torture knowing our son was only thirty minutes away from us but we could not meet him yet. When we were finally given approval, we headed to the hospital the following morning and met our son, Thad, for the first time. We had only spoken to his birthmother once through text, so we had no idea what to expect walking in to meet him, but he was perfect.

When we left the hospital with Thad, our home study had only been approved for three weeks. We were shocked at how quickly his adoption happened, and it showed us just how differently the process can work.

Our Biggest Surprise Yet

As we settled into life with our two boys, we were contacted by a friend asking if we would meet with a younger couple and the birthmother’s parents about adoption. The couple had a one-month-old daughter, and throughout her pregnancy, she had considered adoption but had chosen to parent. However, now that she was raising her daughter, she was reconsidering adoption. We agreed to meet with her and met who would become our daughter, Ruby. We could not believe what was happening. Thad was only six months old, and we were now adopting a one-month-old!

We have an open adoption with Ruby’s birthparents and her maternal grandparents. She has been the biggest surprise and blessing to our family and has completed us.

Through all three of our adoptions, we found it was crucial for us to not only lean on each other but also our support network. It was evident to us that our friends and family wanted to help us through the difficult moments but did not always know what we needed. Having an open dialogue with them and expressing our needs really helped ease the pain but also allowed us to celebrate with others.

While we found ourselves with support from those around us, at the same time, we noticed how little support many of the expectant mothers had. We never want others to view our children’s birthmothers as women who failed at motherhood; in fact, we find it is the complete opposite. The choice birthmothers are faced with is an immense one, and we hope to continue to educate and advocate for adoption to those who may not be as well-versed as we are.

It goes without saying that we love all of our children and their biological parents, who made such courageous decisions. We know that without their love for their children, we would not be blessed with the family we have today.