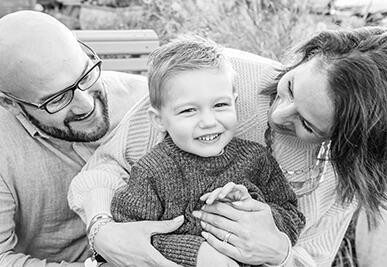 Our Path to Adoption

We always knew adoption would be a part of how we grew our family. We just did not expect that it would be the only way. When we started trying for a child, we were met with infertility. Going through infertility was so hard on us emotionally and physically. It was taking such a toll on us that we decided to take a break for a while.

There were so many signs that were pointing us to not only to adoption but to Angel specifically. Jennifer was reading a book where the main character was adopted, which planted the seed of thinking we should switch gears from infertility treatments to adoption. Her mom was a teacher at a daycare, and she had students who were twins. Their mother adopted them and worked with Angel Adoption. She had great things to say about Angel, which was great! That is not where the signs stopped though. Steve coached basketball, and one of the children on his team was adopted from Angel. This solidified our choice to not only pursue adoption but to use Angel to grow our family.

When we told our friends and family we were adopting, they were all supportive. Jennifer has three cousins who were adopted, so adoption was not a foreign thing to our family. Steve also had a close family friend who had three children. We got together with them and asked them all the questions we could think of. They told us a lot of information that would allow us to enter into our adoption journey with open eyes, hearts, and minds. The chance to align our expectations and talk with our friends gave us hope.

When we started our journey, it is safe to say we experienced every emotion possible. Excitement, fear, and just pure readiness were some of the emotions we felt. We had been married for six years prior to us starting a family and waited a long time to feel like we were ready for that big step in our lives.

Some Roads Are Dead Ends

Shortly after starting our journey, we were chosen by an expectant mother, but just as quickly as we were chosen, we were told she was parenting. That was hard because we were on Cloud Nine being chosen out of all the waiting families just to have the cloud ripped away when the expectant mother changed her mind. Of course we knew this was a possibility, but the first heartbreak is always hard because it shows that the uncertainty is real.

There were other opportunities that came and went, but another one that was very difficult for us was when we were chosen by an expectant mother right before our forever opportunity. We talked with her and built a relationship with her for five months. Each month made us feel more and more hopeful that this would work out. We eventually met with her in person, which made our relationship grow even more.

We did not expect for that opportunity to end the way it did. When it felt like our whole adoption plan was falling apart, it broke our hearts. We started thinking maybe adoption was not for us and we had chosen the wrong path.

We looked into foster care and considered switching gears again. We had gone through the process of getting certified when we got an email that would change everything. As we read through the email, it had limited information but enough to make us want to opt in. We had to wait to know if our profile would be chosen by the expectant mother who was due in such a short amount of time. Our heads were spinning, but we were so excited and honored to be the family she chose.

With the expectant mother due in a month, there was not as much time to build a relationship, but we talked and got to know each other. We found out on our tenth anniversary that the expectant mother was having a baby boy. Everything was going well, and we were getting more and more excited. Mentally preparing but also not allowing yourself to get too excited is a hard balance to find.

We packed up our car the day before she was due and headed to what we hoped to be our son. When we arrived at the hospital, we met the expectant mom for the first time. We also met our son for the first time. It was emotional, and he was the cutest baby we had ever seen. She let us spend one-on-one time with Carter, which lasted for about an hour. We could not believe we were holding him. For the first time, it was just the three of us, and it was the most surreal moment for us. We wanted more time, but we wanted to be respectful of the birthmom’s wishes and allowed her the time to figure things out and make what would be the hardest decision of her life. We knew it was hard on us, but it was way harder on her.

We were able to meet with the birthfather as well while at the hospital. There was a time when Steve was able to have a heart-to-heart with the birthfather. This was his first child but the birthmom’s fifth, so the emotions were very different for each of them. The birthfather asked Steve to promise him he would give Carter the best life possible and love him. Tears were shed and promises were made that we intended to fulfill. Jennifer was also able to have a heart-to-heart with the birthmom, where a promise was made to update her on all the moments with Carter. We were so thankful to both of them for allowing us to love Carter and be his parents.

The day we brought Carter home was Steve’s birthday, so there is no way to ever top that gift. Carter truly is the most amazing gift, and we could not imagine our lives without him. For the first year of Carter’s life, we stayed in touch with his birthmom. She texted us to let us know her number was changing and provided us with her new number. When we sent updates to the number, it was not her number. We are unable to stay in touch with her, but hopefully when she is ready, she will reach out.

Our road to parenthood took four years, and it was nothing short of a very bumpy roller coaster. If we had to, we would do it all over again despite the heartbreak. The hardest part for us was thinking every opportunity was the one and not always being mentally prepared for things to not work out. There were times we felt isolated because we got to a point in our journey where we did not want to tell anyone we had an opportunity. By not telling anyone, it allowed us to not have to relive the heartbreak by explaining what had happened over and over. We told no one when we left to meet Carter, but it was our way of protecting our hearts just a little bit.

Having a strong marriage is so important when navigating adoption because when one is down, the other has to be there to be up. We know it sounds cliché, but keeping the faith even when it is hard is important. We are big believers that everything that is meant to happen will. There is no way of totally preparing for the dark times and heartbreak, but you have to enter your journey knowing your heart will break. Hold on to the fact that there will be light. Your light at the end of your journey is your son or daughter, and that is worth every ounce of pain, tears, frustration, and heartbreak.