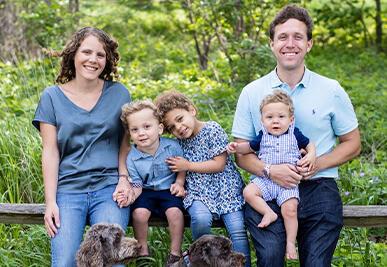 We wanted to start a family, but like many other families, we were met with some heartbreaks. While in the process of growing our family, we suffered two miscarriages, and one of those miscarriages was really scary. We decided it was time to look at different routes. Navigating infertility makes you feel like you are losing control of your life, so we decided we wanted to take that control back. We were not going to let this stop us from becoming parents.

George and his brother are adopted, so the thought of adoption was not foreign. Adoption was always on our radar, and now it was at the forefront of our minds. As we researched agencies, we felt Angel would provide us with a more personal, one-on-one experience as we navigated such an important journey. When we met with Angel Adoption staff, we felt heard and seen in that meeting, which ultimately led us to choose to work with Angel.

We were excited to start our adoption journey, and although initially we wanted to tell everyone, we decided to only tell our parents. No one knew we were pursuing adoption because we felt it would be easier to tell them once things were final. We did not want to deal with the heartbreak of telling people things didn't work out. Our parents were all supportive, and we are thankful for the support system we had.

As we started the process of adoption, we worked on our home study, which was a lot more time consuming than what we envisioned. Although at times it felt overwhelming, it was also refreshing to be checking things off our list and taking the steps needed to become parents. We were nervous and excited, but ultimately we knew we were on the path that would lead us to our child.

The Journey to Keira

A few weeks after we finished our profile, we were selected by an expectant mother. We talked on the phone right away, and through our conversation, we learned she had several children and felt she could not handle more. That was understandable, and it seemed she knew what she wanted. The birthfather was on board as well, but she ultimately said she could not place and wanted to parent. It was our first failed opportunity, which did not feel great; however, we respected her decision.

A few weeks after our failed opportunity, another expectant mother chose us and wanted to communicate with us. However, we noticed some red flags right away. She only would communicate through email, which is not always an immediate red flag, but she also sent us GoFundMe pages for her other children. This made us realize that ultimately it would not work out.

We were chosen a third time and texted with this birth mother over a holiday weekend. We spent time getting to know a little more about her over the course of a few months. We never really talked on the phone, but that was okay as we understood that texting allowed her to not feel the pressure to respond right away. With texting, we were able to pause and think about what we wanted to say or how we wanted to answer certain questions.

She was ready to meet us prior to her having the baby, which we were extremely excited about. We drove out to meet with her, her family, and her son. We took them out to breakfast and then to a playzone so her son could play. She had given birth to her first son a year prior to getting pregnant with her second child. He was adorable, and it meant a lot that she opened up and shared her family with us that day.

Since no one knew we were pursuing adoption, Michelle had to break it to her employer that she might need to jump out of a meeting to leave. We packed up the car and decided we wanted to prepare what we could so if we were to get a call, we would be ready to go.

At two in the morning at the end of that month, we got a call that said the expectant mother was in labor. We tossed the dogs in the car and headed out on a five-hour drive. We started getting excited but also wanted to guard ourselves because we did not know what would happen. We found an Airbnb down the street from the hospital, and everything became surreal.

Unfortunately, we did not make it in time to see Keira be born. We arrived at the hospital and walked into the room where the birth mother was, and she handed us the cutest baby girl. Even the nurses were commenting on how beautiful she was and made comments about her beautiful lashes. We instantly fell in love; there was no way to stop that.

We felt a mix of emotions in being overjoyed to welcome our daughter while remaining guarded in case circumstances changed. We took pictures and held Keira, but also we were worried that we might not get to take her home with us. Originally the birth mother did not want to spend any time with the baby, but changed her mind that day. The birth mother told us she wanted to spend the night with Keira, and we were of course worried but wanted to be respectful of our role and her time with her child. The next morning we came back to the hospital to see the nurses wheeling in our daughter to join us for good. The emotions of joy and relief are something we will never forget.

Keira was the greatest gift, and we could not imagine our lives without her. Our relationship with Keira’s birth mother was wonderful, and we told her we wanted her to always be able to do what felt right for her. Although we have not heard from her in some time, we are grateful for the communication we have had and hopefully might have in the future.

We came into our adoption journey expecting it could take a while. When you are pregnant, it is for nine months, so we were shocked when it only took what felt like a short amount of time to find the baby girl meant for us. One of the components we feel led to our successful and quick adoption was that we were completely open with our preferences. We wanted to be parents, and none of the preferences mattered. Another factor we felt helped us was that we made a video and tried to be authentic to showcase our personalities.

Live your life and find a support group that can help you through your adoption journey. Enjoy where you are, and know that in the end, things will work out and it will be the best gift you will ever receive. We are forever thankful to our daughter’s birth mother for choosing us to parent the most beautiful little girl.