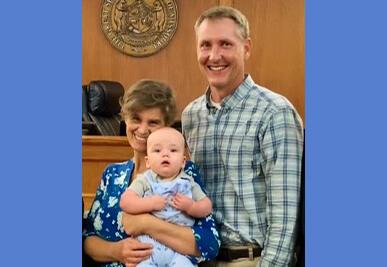 Originally, I wanted five or six children because having a big family was something I had always dreamed of. When I was in college, I started using drugs and that continued until I was 33. I have been clean and sober now for over 16 years. Bret and I met and fell in love when we were in our early forties. Since we had met later in life and Bret already had children from a previous relationship, I never brought up having children because I didn’t feel like it was fair to expect something so huge from him. Also, part of me didn’t believe I deserved a child somehow. When we were 46, I finally decided to bring up how important having a child of my own was to me. Bret told me that I had been an amazing stepmother to his children and that he was willing to try, so we decided to jump right in with the adoption process.

Angel Adoption’s success rate was one of the biggest reasons we joined because we felt we would be successful with them and we loved how inclusive they were in giving so many types of families the chance to adopt. So many emotions rush over you as you are navigating the adoption process. The home study takes a lot of time, and different worries flood over you. I was also worried that my past would prevent me from pursuing something so important, but it did not end up being an issue at all. We both passed the home study and background checks with flying colors. Everyone at Angel gave us so much reassurance, which we are eternally grateful for.

Thirteen weeks after completing our home study, we got the call that we had been chosen by an expectant mother. We did not want to get our hopes up because we knew that nothing was for sure. We sat on the front porch and talked with the expectant mother for two hours that night. I could tell that she was a drug user from the experience I had with drugs myself. Our birth mom had told Angel Adoption staff there was no drug use, but I understood why she would say that because I would have done the same thing when I was using. I would have been scared to tell the truth about myself. I also wouldn’t have wanted my baby to be judged by my actions.

The expectant mother and I got along great and bonded over a lot of similarities. A few weeks after talking, she stopped communicating with us. She would do this on and off about six or eight more times and every time, my stomach would drop and I would lay awake at night worrying about her and the baby. We wanted to help her and help the baby, but did not know what to do from a distance when she stopped communicating.

I messaged her one day and told her my story in hopes that it would help her. The stories were so similar, and I felt that If she knew what I had gone through in my past, it would help her through this time in her life. Our expectant mother found out she was pregnant because she went to the ER with back pain, and I had a similar story from when I was living in Boston. I found out the pain was my kidneys failing due to my drug use. I also found out I was pregnant when I was in the hospital and miscarried twins. I have carried that guilt and pain with me for so long and I finally felt like it might actually be able to help someone.

After I shared my story with her, our expectant mother reached out. She wanted to meet us in person, so she picked a restaurant and we got in the car and drove over three hours to meet her. Unfortunately, she stood us up, which was so frustrating at the time. I was devastated, not only because she didn’t show up to meet us, but I felt like I nothing I do is helping her or the baby. We called Angel Adoption and said we were done. We needed to walk away because we did not want to be taken off the market when the communication was so sporadic. We did not want to walk away, but we also had no idea what we should do. We leaned on Angel staff to help.

We messaged the expectant mother one last time to try to salvage things but did not hear from her for weeks. Of course this was heartbreaking for us but not totally unexpected. Out of the blue, we got a call one night and it was the expectant mother saying she was in a really bad situation and did not feel safe. She asked if we could pick her up, which we did not hesitate to do.

It was a busy Saturday night at the restaurant and I was standing at the stove with a dozen tickets in front of me when the call came. I called Bret, who was working an overnight shift at his job, and asked him to go get her. She got in the car with nothing but the clothes on her back. Bret took her to buy clothes and toiletries. We rented her an apartment about 15 minutes away from our house so she had a safe place to stay. We got her settled in, and she stayed there for about four months. We went to NA meetings with her, and she spent Thanksgiving with us. We went to all of her appointments together and everything was going well. She and the baby were safe, which was the most important thing to us.

We were fully committed to her safety and happiness. I would visit her twice a day to administer medicine that she needed and we would spend time laughing and making future plans for both her and for the baby. We grew very close, and things were all going well. Our attorney wanted us to move her away about an hour to another county. Apparently, that county was more adoption-friendly, but we were worried about being so far away and not being able to see her as often as we had been. Even with our worries, we were on board with what would be the best overall.

She was so proud of herself for staying clean for as long as she had. We were so proud of her as well and could not have asked for anything more. When we went to her doctor’s appointment, they mentioned the need to induce her because she needed to be taken off of the medicine she was taking and that way the birth could be more controlled.

When I went to pick up our expectant mother at five in the morning, I noticed right away that she had been using drugs. I understood it was all the stress and anxiety leading up to this day and did not judge her for this, but we were upset, of course, and she was also upset. When we arrived at the hospital, they tested her to confirm the drug use. We were all crying, but we tried to push through.

The doctor was monitoring the baby and at one point said she needed a C-section or the baby would start losing heart rate. This was the scariest moment and frustrating because the expectant mother did not want to go through with the C-section. We talked with her and persuaded her to rethink this because we knew she would want to make sure the baby was safe. The expectant mother ended up choosing to go through with the C-section, and the baby was born.

We were in our room with the baby when the nurse let us know the birthmother would like to see the baby. She had maintained for months that she didn’t want to see him and I was very worried. I asked if she was okay, and she said she was doing fine but wanted to see if the baby had her toes. The next morning, the birthmother left the hospital without anything to care for herself after the C-section. I asked the nurse to pack a bag with all the supplies she would need and took it to her. We wanted to make sure she was safe and healthy because we cared so much for her. There were so many emotions that had presented themselves over the course of 24 hours, but at the end of the day, we were always all in with her.

Laying eyes on the most beautiful baby boy was something we had dreamed of, and now it was happening. The road to our son was not what some would say was easy or perfect, but we were committed to being parents and would do anything for him, even before he was born. We have talked with his birthmom a few times since our son was born. We also have communication with Ellis’s birth Grandmother and his half-brother and cousin who were both adopted as well. His birthmother follows along with us on FaceBook and has liked several pictures of Ellis. The door is always open to see him as long as she is not using, which was the post-placement agreement we talked about prior to the adoption. There are no words to describe the magnitude of the gift she has given to us and we will love her always. We hope Ellis can have a good relationship with her someday as well, if he so chooses.

The best advice is to be open minded because, when you are not, you could be closing yourself off to the baby that is meant for your family. Ask yourself what is important to you, and don’t give up. Ellis always felt like he was ours, even from the first phone conversaion. During the process, several friends and family members told us we should walk away because it would never work, but we are glad we stuck by his birthmom. We are so thankful for the opportunities Angel Adoption and she gave to us, and it all led to the most perfect baby boy. We are so blessed!