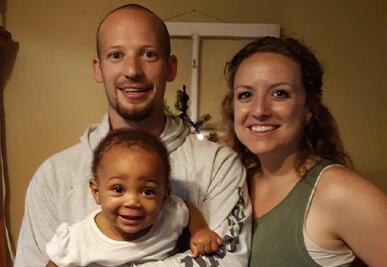 When we found out we were unable to have children of our own, we explored our options and both felt strongly about pursuing adoption. We interviewed with a couple other agencies along with Angel, and we felt that Angel was very transparent and up front about cost and risks compared to the other agencies. It also just felt right, and we felt comfortable with Angel.

We weren’t sure what to expect as everyone we knew who had adopted had a different story. We knew there weren’t two adoptions alike, so we were scared of the unknowns but were also excited and hopeful. All of our friends and family were thrilled! Aaron’s cousin was adopted and several of Haley’s coworkers had adopted, so our family and peers were very supportive. It was time to take a leap of faith and pray that everything would work out the way it was supposed to.

Our first opportunity was about seven months into our contract. The expectant mother was very early in her pregnancy, so we knew she had a lot of time to think about things. She was very open and honest with us about her situation. She was just exploring her options and wasn’t sure what she wanted to do. Her situation was very difficult and eye opening for us. It’s very hard to understand all the things that expectant mothers go through until you are communicating with someone. A couple of months into getting to know her, she decided to parent her baby. We were very supportive of her decision, but it was difficult for us. We went from talking to her on the phone a few times a week and really getting to know her to no contact at all.

It was another five months before our next connection. The next expectant mother who chose us also was early into her pregnancy, so again, we knew she had a while and tried not to get our hopes up. We talked with her for five months, and she gave birth very prematurely. All we knew was that the baby was born, and that was it. She wasn’t telling us to come to her or not to. After a few days, she let us know she and the father were going to parent.

A couple months later, we got another call about a mother who was due in two weeks. This was so different from the other opportunities, where there was so much time to build a relationship. We instantly hit it off with her and had high hopes. We were texting with her nonstop for a few days, and then we stopped hearing from her. We knew this was common, and we also knew she had a lot going on; we wanted to respect her and give her whatever space she needed. A couple days later, our coordinator let us know she chose another family.

This connection hurt more than the other two and not because she had done anything to hurt us at all. It was just a good connection that suddenly came to an end, and we had thought for sure this one was going to be it. There are so many emotions invested in an adoption journey, and it can become overwhelming at times.

We knew this was in God's hands and that he would provide, whether that would be the joy of bringing a child into our lives or the acceptance that this may not be his plan for us after all. We prayed a lot, and it helped knowing people who had gone through the same process that we could lean on for support.

Three days later, we got the call that would change our lives. We almost didn’t believe it. Once we met her, we knew she was meant to be with us. It’s a feeling you can’t really describe other than it felt right. Haley was at work when she got the call around 11 a.m. Just the day prior was our quarterly check-in with our coordinator, so we weren’t expecting another connection so quickly let alone one where the baby was ready to be born.

We both left work right away to go over the legalities, and later that day, we were on the road, ready and excited for the eight-hour drive ahead to go get our baby girl. By nine the next morning, our Lillian was in our arms. It was crazy to think that in less than twenty-four hours, we were parents. It was emotional for all of us, especially with how quickly everything went, but we’re so blessed and grateful for the selflessness of her birthmother.

We instantly fell in love with her! She waved to us and held out her arms to us like she wanted us to hold her. She was all smiles and still is! She was such a sweetheart. Although it took a bit for it all to sink in, we instantly felt this unconditional love, as if she were our own.

We’re glad we got to meet her birthmother, but everything happened so fast we hardly got to know her compared to the other connections we had. In this situation, we didn’t even get to talk to her until the day we had Lillian in our arms. We’re grateful she chose to stay open, and we’re hoping that over time, we can build a relationship with her.

The birthmom requested that we just send her updates on how Lillian is doing. We did touch base with her when we got home to let her know, and she appreciated that. Because we only had one encounter with her, we don’t have much of a relationship with her yet, but we know that will grow over time.

The hardest part was having multiple connections and having our hearts broken so many times in such a short amount of time. It’s so hard when you get a call about an expectant mother who picks you. Of course you're excited, but the mother isn’t, and it’s hard to gauge what to say and how to react. When you do start to feel a connection, you start thinking that this could be it and start imagining your relationship with that mom post-placement. Then, suddenly, everything comes to a screeching halt because either they decided to parent or went with another family.

Of course we’re supportive of their decisions and we’re genuinely happy for them that they were able to come to that decision, whatever it may be, but that doesn’t stop our hearts from breaking. And then to get right back into it and start over again is hard.

Lillian was worth every heartbreak, tear, and worry! Our lives are so much better because of the decision our birthmom made. We could not be happier, so trust the process and remember that whatever is supposed to happen will happen.