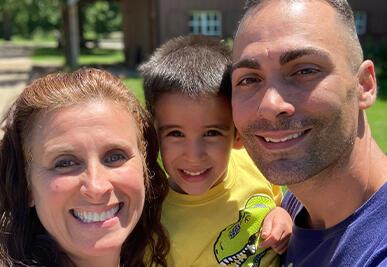 Coming into our marriage, Kim had three older biological children from a previous marriage. We knew we wanted to have kids together and had already discussed the possibility that additional biological children might not be possible for Kim. When it came time to truly consider our options, it was clear adoption was going to be the best fit for us.

We first considered foster care but had a negative experience with the agency we met with. We continued our research and found Angel. We appreciated their promptness in their outreach and that they were local to us.

As we shared our plans to adopt with friends and family, people were supportive but also questioning if we really wanted to “start over” given that Kim’s youngest was already in high school. We did not let their skepticism deter us and were thrilled about the opportunity to expand our family and have a child together.

Planning for the Unexpected

Early into waiting, we were told our profile was selected twice, but we never spoke with either expectant mother. One we knew had chosen to place her child with a family member before we ever had the opportunity to speak with her.

While those two opportunities did not lead to a successful connection or even a conversation, our third one did. Kim was at work when she received the call from Angel that our profile had been selected and the expectant mother was 39 weeks pregnant and was expected to deliver before the week ended. It was shared with us that she was having a boy and she and the expectant father wanted to speak with us that evening. It was an immediate yes from both of us, and after work, we nervously cleaned the house and got ourselves ready. We laugh now about cleaning the house, but at the time, we weren’t sure if they would want to FaceTime, and we wanted to be prepared.

That evening, we spoke with both expectant parents, who were choosing adoption together. They were both friendly and personable and had a clear vision for what they wanted for their son. She asked if we were prepared to travel pretty quickly, and we reassured her we were.

After our first conversation, we made rough travel plans to leave within the next couple of days. The following afternoon, while Kim was at lunch with a client, she received a text that labor was moving faster than expected and that we should travel ASAP. Flights for that evening were out of the question, so the following morning, on the 5 a.m. flight, we headed across the country, hoping we would make it there for the birth.

A Mix of Emotions

Once we landed, we had a one-hour drive to the small town the expectant mother’s hospital was in. We checked into our motel and grabbed a quick lunch, all while staying in contact with the expectant mother about her labor. She was admitted that evening, and that’s when we headed to the hospital. We were so nervous to meet her in person! We’d only had one phone call and a handful of text messages; what if we didn’t click in person or what if she didn’t like us? Once she was settled in her room, we went to spend time with her and the expectant father. Thankfully, we all got along great! They had their infant son there with them as well, who was just adorable. We were able to stay with the expectant mother for most of the night and talked until almost midnight.

We decided to head back to our motel for some rest but told them to call us if anything changed; we’d be there immediately. After only a couple of hours of sleep, we got the call that it was time!

We rushed back to the hospital and got there just in time. Having only spent a couple of hours together, we weren’t sure what sort of support role we should play, but we all found a natural rhythm, and after only four pushes, our son, Daniel, was born. Only hours before Daniel was born, we had reassured his birthmother that if she ultimately chose to parent, we were going to support her and we didn’t want her to be afraid to make her own choices. Now that he was here, we still felt the same way, but we were also emotional and scared. What if he wasn’t ours? In that mix of emotions was the absolute love we had for his birthmother and the brave decision she was considering.

Daniel’s birthmother had asked to hold and feed him first, which we were happy to honor. We had originally planned to have our own room, but the hospital was requiring us to pay and his birthmother did not want that for us, so we spent the morning with her. It was an emotional morning for everyone, so to allow her some time and space, we eventually headed back to our motel to rest. She continued to reassure us that she wasn’t going to parent; she just needed to process.

The following day, we returned to the hospital to spend time with Daniel and his birthparents. We spent the day watching movies, talking, and connecting. It all felt like it was meant to be.

When it was time to discharge, we all left the hospital together. There was a lot of hugging and crying and, from us, an underlying worry that she might still choose to parent. The birthparents were headed home and we wanted to be close to them, so we left the hospital and drove to their hometown to wait for our clearances.

We found ourselves in a small, rural town where everyone was super friendly but there was very little to do. We had lunch with the birthmother and her friend one afternoon and later had dinner with both birthparents and their infant son. We were able to take pictures together at dinner that evening, and we love having those as a part of Daniel’s story.

We ended up staying for two full weeks while waiting on a court date, which was proving difficult to schedule. When we finally had a court date on the calendar, we headed back across state lines to be closer to the airport so we could fly out the following morning, after paperwork had been signed.

What we had not taken into consideration was that although we were only a couple of hours away, there was a time change and we were now at risk of paperwork not being signed before our flight left. Thankfully the airline staff was understanding of our situation and they held our luggage until 15 minutes prior to boarding. We got the call from Daniel’s birthmother that everything was signed and we were approved to head home. After almost three weeks away, we were so excited to bring Daniel home and introduce him to his big brothers and the rest of our family.

Our connection was quick but meaningful. In the three days leading up to Daniel’s birth and two weeks after, we had shared with his birthmother that we were comfortable with any type of relationship she was interested in having. We wanted to leave it up to her to decide based on her comfort level. We were happy to provide updates but did not want to reach out unsolicited and potentially open up any wounds she was trying to heal.

Having open minds and hearts proved to be beneficial throughout our adoption journey. We never could have expected to have such a quick adoption both in waiting time and then time until the due date. Having almost no expectations really allowed us to go with the flow and be prepared for anything. Daniel has been the most perfect addition to our family, and without his birthmother’s loving decision, our lives would not be the same.