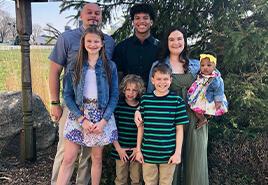 Growing by Just One More

Coming into our marriage, Julie had one biological son, whom Shaun adopted. Together we had three biological children, but even as a family of six, Julie never felt as though we were done. Julie’s heart was always drawn to adoption, so while it had always been a conversation between us, it took Shaun until our youngest was six to come around to the idea of a family of seven. As soon as he mentioned having another child, we jumped right into the adoption process.

We didn’t share our plans to adopt with many, but those whom we did share with were so supportive of our journey. Those who had known Julie for years remembered how she had always desired to adopt and were thrilled to see it finally happening for our family.

Not long after joining Angel’s program, we started communicating with our first expectant mother. Our relationship with her was complicated as her lifestyle was so different from ours, and there always seemed to be drama we couldn’t fathom. Each time we attempted to hire attorney services, she was unable to meet with the attorney, and after a number of failed attempts, we recognized we were being emotionally scammed. We had read the stories prior to starting adoption and we knew there were women that would try to take advantage of the adoption process; however, we had not anticipated someone who was only trying to take advantage of our vulnerable emotional state.

After our first two opportunities, we were contacted about a third expectant mother. She was early in her pregnancy, which we were grateful for. We thought having a lengthy relationship might be better for us after the first two. Less than four week after our first conversation, we were informed she was financially struggling more than anyone was aware of, and if we chose to move forward, we were going to be expected to start providing expenses immediately. We were completely open to financially supporting an expectant mother, but as a large family, we knew a long financial connection was more than we were able to provide. We wanted the expectant mother to have the resources she needed, so we chose to walk away from the opportunity.

After three quick opportunities, we went through a handful of months with no outreach. We didn’t know it at the time, but those quiet months allowed us to reset and emotionally recover from the whirlwind of what had transpired previously.

When Angel reached out to us with a fourth opportunity, we felt emotionally ready. We were shocked when we found out the expectant mother’s name was the same as our first opportunity who had hurt us so badly; we almost said no, but we had agreed to say yes to each opportunity until there was a reason not to.

As soon as we started texting with the expectant mother, we knew this time was different. Our conversation was easy and flowed naturally. She was younger, with a child already, so we knew she understood a mother’s love and the magnitude of the choice she was considering. The expectant mother didn’t have her family supporting her decision and she was not receiving regular prenatal care, which concerned us slightly, but she never seemed to waver in her choice. We offered to meet the expectant mother in person throughout her pregnancy, and she continued to say no. We were close enough that had she said yes, we could have accommodated easily, but we just wanted her to be comfortable.

About two weeks before her due date, she finally scheduled an ultrasound, and we found out she was having a girl. We had come into this process hoping for a second daughter, and in that moment, it finally felt as though things were going to work out.

The expectant mother had chosen a C-section for her delivery and had asked that Julie be her support person at the hospital. We drove out the day before her delivery date and waited for it to be time the next day. There was some confusion the following morning as to what time we were supposed to be at the hospital, so to be safe, we showed up early and waited for her. When the expectant mother arrived, we saw her mom was dropping her off. We had hoped to meet her mom, but she chose to stay in the car. We gave the expectant mother a hug and headed inside to check in.

After settling into the prep room, Julie and the expectant mother had two hours to spend together before the C-section. It was their first time meeting in person, and they found themselves easily able to fill the time with small talk. When it was time for surgery, Julie went in after the expectant mother and remained with her for the entire procedure. When our daughter, Ivy, was born, hearing her cry was the sweetest sound. Julie could not believe the amazing feeling of meeting our daughter for the first time but also noticed the silent tear Ivy’s birthmother shed for her.

Ivy’s birthmother had requested separation from her after her delivery, so Julie was provided her own room down the hall. We knew she had wanted a closed adoption, and we wanted to respect her wishes as much as possible. Ivy’s birthmother did have a second person come to stay with her at the hospital, which we were grateful for. It was difficult for us to imagine how lonely she was and the grief she was feeling. Julie did have the opportunity to spend time with Ivy’s birthmother prior to discharge, without Ivy present, and it was reassuring to see her seemingly doing so well.

Throughout the pregnancy, she always expressed wanting a closed adoption. Coming into adoption, we initially thought we had wanted the same, but through education, we found ourselves willing to have an open adoption. We always wanted to support Ivy’s birthmother and her adoption plan, which meant supporting her desire for a closed adoption. We have only once exchanged photos with her birthmother and have not had any contact with her since. While she may not be an active part of our lives, we will always speak so highly of her in our family and to Ivy and will honor the courageous choice she made.

After our first disruption, we were unsure if the adoption path was right for us. We were so emotionally drained, and it had only been one opportunity. We learned quickly how much of this process was outside of our control and that we would have to learn to let go.

After seeing how easy the relationship was with Ivy’s birthmother, we knew the adoption process could be something of beauty. Knowing how to support her and whether we were doing enough was always a fine line we were always conscious of. We knew we were doing the best we could, and thankfully, it was exactly what Ivy’s birthmother needed and what brought us our completed family.