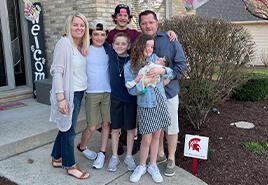 Long before we were a family of six, we lost two babies to a rare birth defect and chose to move forward with adoption. We adopted our oldest son in 2006 and then went on to have three biological children. We also knew we would adopt again; it was just a matter of when. As our children got older, the idea of adoption never left our minds and hearts. We knew the timing was never going to feel perfect, so there was no better time than now to start. We were hopeful coming into the adoption process and were going to feel blessed no matter what happened for our family.

The Best Choice for Everyone

We did have one connection with a birthmother where we traveled for the birth of her son and cared for him in the hospital, but she ultimately chose to parent. We were devastated at our loss, but we knew the decision was not ours to make and that the adoption process was about the best choice for the child and their birthmother.

When Angel contacted us with another opportunity, we were open to it. The expectant mother was clear across the country from us, had received little prenatal care, and did not want contact with us; however, she had read our profile and chose it, and she was ready to meet with an attorney immediately. She was likely due sooner rather than later, and after our long wait, we were okay with the timing. We were taking the connection one day at a time, started to hire attorney services, and were anxious for her upcoming doctor’s appointment. We knew it was unlikely we would hear anything after her appointment given that it was the end of the week and later in the day.

While out as a family the next day, Nora received a series of emails from both Angel and the attorney asking us to call them and if we were in the baby’s birth state. Quickly putting the pieces together, Nora realized the baby had been born and that we were nowhere near her. Nora spoke with the attorney and found out the baby was okay and that the birthmother understood we could not get there that day. She knew from our profile that we were a large family and flying across the country would take some coordination. We were so grateful for the grace she showed us that day.

After we shared the news with our kids, we made travel arrangements for Nora and her cousin to fly to the birth state while Paul stayed home with our kids to help manage their schedules and schoolwork. We were so excited to be finally welcoming another child into our family, and we could not wait to meet her.

Nora and her cousin flew into the closest large city to the baby’s birth town and then drove two hours to the hospital. When they arrived at the hospital, they were greeted by a room full of nurses who were anxiously awaiting our arrival. Meeting our daughter, Josephyna, was a dream. She had the most beautiful brown eyes and a headful of brown hair and was the perfect addition to our family. They were provided a room at the hospital for the night and were approved to discharge the following day. They chose to travel to the larger city they would be flying out of and waited for our clearances.

After five days spent exploring the city with baby Joey, Nora and her cousin were finally given approval to head home. Paul had only met his daughter over video call and photos, and he and the kids were overjoyed to be meeting our newest family member.

We never doubted we were ready to welcome another child into our family, but we knew the timing was out of our control. We continued to hear over and over that the perfect child for our family was out there; we just had to wait patiently. We had to continue to take risks and trust the process, which wasn’t always easy. But in the end, that is what led us to Joey and Joey to us.

Take the first step by filling out our free adoption application today! As of September 28th we currently have 2 spots available!

Start Your Adoption Journey Today! As of September 28th we currently have 2 spots available!