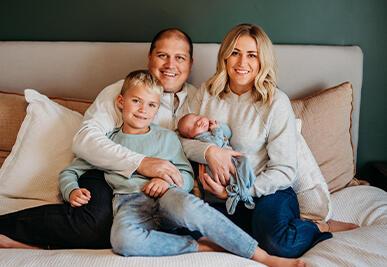 From the time we met and started dating, we knew biological children might not be our path to parenthood. Sarah was born with a congenital heart defect, and we were unsure if she would ever be able to safely carry a child. After having open heart surgery in 2014, her cardiologist gave us the go-ahead to start trying for children. We found ourselves pregnant soon after and had our son, Jackson. While Sarah had a normal pregnancy, the last six weeks were incredibly difficult on her heart, and she had to move three hours away from home to be closer to her cardiologist.

Knowing that a second pregnancy would be even more difficult for her body, we chose to start the surrogacy process with Sarah’s sister as our surrogate mother. After a successful transfer that ended in a miscarriage, we were crushed and a little lost as to where to turn next. We could go through surrogacy again, but it just didn’t feel right. This is when we started considering adoption.

We spoke with a number of adoption providers before finding Angel. Our first conversation just felt like home. Our beliefs, hopes, and personalities were all a match, and they seemed like they were going to provide us the support we were looking for. As we shared with friends and family our news of adoption, they were excited but extremely guarded on our behalf. They knew how badly we wanted to grow our family, and they wanted to protect us at all costs.

As we slowly worked through our home study and profile, we were nervous. We didn’t know what to expect from the process. Once our profile was completed and being presented, it was difficult not to second guess every choice we’d made. Did we choose the right pictures? Were our preferences “enough”? Did we work with the right adoption provider? Thankfully we had Jackson to help keep our minds off the waiting, but there were still difficult days.

After close to one year of waiting, we got the call we had been waiting for: Our profile had been chosen by an expectant mother! We started to get to know her and were even starting to plan a visit, but then the expectant father found out about the adoption plan, and they ultimately decided to parent. We were disappointed, but we also had hope.

Only three months later, our profile was chosen a second time. We spent three months getting to know the expectant mother and, at times, the expectant father too. They were choosing adoption together, and they were both a joy to speak with. We started with texting on a daily basis and then moved to Sunday catch-ups. The expectant mother had two sons of her own and they were a busy family, so a Sunday catch-up worked great for both families. It was our time to reconnect with her and chat about our week, our kids, and, of course, the adoption.

While continuing to build a relationship with the expectant mother, our profile was selected again. Not wanting to pass up an opportunity, we said yes, just to see. From the first text conversation, it was clear to us this relationship didn’t feel as easy and natural as the one we had spent the last three months building. The expectant mother was significantly younger and really unsure of her plans. We kept trying to reassure her we just wanted what was best for her and her child, regardless if she chose adoption or not. Only days later, we were informed she was no longer considering adoption, and we were truthfully okay with her decision. The entire time we had spoken with her, it felt like we had been cheating on the expectant mother we had spent so much time with, and it really showed us the relationship we were building was meaningful.

As we got closer to delivery, we started to make our travel arrangements. The expectant mother was scheduled for a c-section, and we were planning to arrive two days early and meet with her in person the day prior to her delivery. About one week before her scheduled delivery, she texted us to let us know she had developed high blood pressure and was headed to the hospital. That evening she updated us and reassured us everything was okay and she should be headed home soon. Not even an hour later, she texted us again saying she would not be going home and they were delivering the baby that night!

We were frantic. We were not within driving distance and knew that driving to her didn’t make sense. We weren’t sure what we should do with Jackson; we just knew we needed to go ASAP. Thankfully we have family who are well-seasoned travelers, and they helped us book flights out first thing the following morning.

Once in the birthmother’s state, we headed straight from the airport to the hospital. We were so grateful that the birthfather was with the birthmother the entire time since we could not be there with her. We were so nervous riding up the elevator and had no idea what to expect, but our nerves were quickly calmed and our time with our son’s birthparents was amazing. We finally got to meet and hold our son, Henry, and hug his birthparents. We spent hours together the first day just passing Henry around and chatting. We had pizza together that afternoon and later moved to our own nesting room and had Henry with us overnight.

The following morning, Henry’s birthmother wanted her older sons to meet their brother, and seeing the three of them together was so sweet. They’d known throughout her pregnancy that she was planning to place him for adoption, and while they wanted another brother, she continued to reassure them that he was going to the most wonderful, loving family and would be cared for. Her oldest son was very protective of him in the hospital and asked us some hard-hitting questions about what we thought of anime; thankfully we passed his test, and we could see him relax about us being Henry’s parents.

We were all able to discharge from the hospital on the same day, and lucky for us, Sarah’s aunt and uncle have a vacation home where Henry was born, so we headed “home” to wait out our clearances. Prior to coming home, we were able to spend another afternoon with Henry’s birthparents and really discuss what our relationship would look like moving forward. We agreed to keep them both updated with photos around holidays, milestones, and big events, and we’re hoping to be able to see each other once a year, when she’s ready. We were really hesitant about an open adoption coming into the adoption process and worried that the baby wouldn’t feel like “ours,” but after meeting Henry’s birthparents and the strong bond we’ve built, we cannot imagine it being any other way. His birthparents are truly wonderful people, and we want them in Henry’s life. We’d never want to deny our son knowing people who love him so dearly.

Henry has been a blessing since the day we met his birthmother, five months before he was born. Our relationship with her has always felt natural and easy. The wait to be chosen by her wasn’t always easy, but we are grateful we found each other and now get to share our love for Henry. Jackson is the best big brother and loves doting on Henry! Our family is forever tied to Henry’s birthfamily with the most amazing gift that could have been given to us.