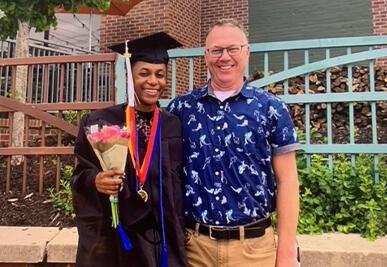 Mike adopted his daughter Abby through Angel Adoption in 2000. Below, Mike shares his adoption story while Abby shares her experience growing up as an adoptee.

I had wanted to be a father for as long as I could remember. The possibility of opening my heart and home to a child was so exciting. I did not have a good childhood growing up, so if I were to have a child of my own, it was important to me to be able to give them a great life.

Though I am not presently, I was married at the time. We had adopted a baby boy with another company prior to working with Angel Adoption, so by the time we started our second adoption journey, we had a three-year-old son. Our second adoption was much easier because the Angel staff was much more organized, which made the process smoother. Not only that, but because I was already a parent at that point, I did not have as much free time to worry about the adoption wait.

We updated our home study from our first adoption and were lucky to be chosen shortly after that. Our beautiful Abby was brought into our lives after only nine months of waiting, and she was well worth the wait.

I have always felt very secure and safe with my story. My dad was always clear about where I came from, and I appreciated that. Growing up, I understood I was adopted, I had two dads, and my birthparents had wanted something better for me. Adoption looked a lot different 22 years ago, but what does look the same today is that birthparents make the decision to place their child out of the deepest form of love.

The idea of having a child from another culture was something I was not only open to, but especially wanted, so I was thrilled to be chosen for the opportunity with Abby’s biological parents. Even so, adopting outside of one’s own race can feel scary or daunting because there are so many unknowns. How will I understand my child’s culture? How will they feel about having a parent that does not look like them? From my experience, I can say how incredibly important it is to cultivate a strong support system that will help with anything you need. Thankfully, I had a lot of friends that were African American, and I leaned on them for a lot of things through the years. For example, they taught me how to do Abby’s hair, even though my thumbs were so big that I could not braid very well.

Being a transracial family and having two dads, I was always aware that my family structure was different. There was never a specific conversation about my being adopted because it was always made clear to me, but I do remember being in elementary school and realizing there were differences among families. That being said, it was never weird or hard for me to have been adopted. I think parents need to worry less about the adoption process and more about parenting. My dad spent so much time with me, and I always felt very loved.

I feel strongly about being clear and open about adoption with your child from the beginning. I explained to Abby starting at a young age that she was adopted and that she had two dads. It was never a surprise to her where she came from, and that made things easier for everyone. We had a closed adoption with her biological parents, because that’s just the way things were done at that time.

Later on in life, I was able to find out who my birthfather was. He was incarcerated, so I wrote to him. He is out of jail now, so I am going to be able to meet him soon. He did not know my birthmother well, so I have never been able to ask many questions about her. I have no expectation of meeting her — whatever happens, happens. I do have siblings I found out about, though, which is nice. I happen to live close to them and will be meeting them soon at a get-together they invited me to. I do have fears that they won’t accept me because my upbringing was very different from theirs. I was treated like a princess and had so many opportunities, but I am hopeful.

A Wonderful Life Together

It was important to me to engage with my children as much as possible and be the best father I could. We built such a wonderful life together. Every moment was precious, from just playing on the living room floor to going on fun and exciting adventures. I am so thankful for both of my children, and so grateful for their birthparents for making the decisions they did. My life would not be the same without them.

I had every opportunity growing up and never felt like anything was missing from my life. From Girl Scouts, where my dad was a troop leader, to playing every sport imaginable, I had the chance to try anything I wanted to try and be whoever I wanted to be.

Of course there were challenges, and the biggest one was going through puberty. My dads did not know much about puberty for girls, but we got through it. I remember they bought me the American Girl Body Book, which helped a lot. Overall, my dad did a great job raising me and I am so thankful for my family.

My best advice to parents navigating the adoption process is to openly explore all the options and possibilities. Don’t close yourself off to anything, and don’t allow yourself to be afraid of the unknown. In my opinion, the biggest challenge of the adoption process is staying positive and staying focused on the big picture. Remember that things won’t go as planned — they never do — but that is okay. There will be all sorts of obstacles, but you have to overcome them in order to make it to the end of the journey, which is parenthood. No matter what, you will love the child you are blessed with, and that is what is important.

Now that I’m grown, I think about nature versus nurture a lot. I am so much like my dad. We have the same personality, from our funny mannerisms to thinking alike, and we always end up texting each other at the same time. I’m currently studying to become an attorney and am excited for my future. I have always had my father’s full support in whatever I did, and this time is no exception. He loves supporting me through this season of life.

I am so thankful for all my opportunities and the sacrifice of my birthparents. I feel like I was always meant to be my dad’s daughter, and I am the person I am today because of him.