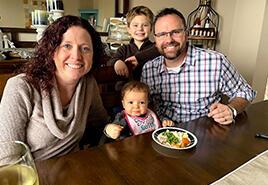 Well before we were considering adoption and had our biological son, Hunter, we suffered with pregnancy loss and were told biological children were likely not going to be part of our future. We decided to start the adoption process, and after a negative experience, we decided to pause our adoption plans. After our paused adoption, Ryan’s sister offered to be a surrogate mother for us, and our son, Hunter, was born.

We knew our family was not complete, and since we had received a positive referral to Angel, we decided to start our research there. Coming into the adoption process this time, we felt much more prepared, open-minded, and stronger as a couple. Our friends and family were so supportive and excited about our decision to adopt and could not wait to welcome another baby.

Shortly after our profile started being presented, we received a call from Angel while on vacation that our profile had been selected. We missed the call and were so worried we had missed our opportunity. When we finally spoke with Angel, we found out the expectant mother was early in her pregnancy and was interested in speaking with us. We were surprised we had been selected so quickly, and we were excited yet cautious. After our initial texting conversation, we felt like we’d made the start of a solid relationship and were excited for what would come next. Much to our surprise, we did not hear from the expectant mother for another four months.

We had assumed after four months of no contact that the expectant mother was no longer considering adoption. We were shocked when one evening Margaret received a text from the expectant mother letting us know she was ready to discuss baby girl names with us. Once we had an opportunity to recover from our shock, we had a great conversation with her about how she was feeling and spent the next month in consistent communication.

After a month had gone by, we traveled to her home state to meet her in person. We knew she was shy and more reserved, and we were nervous about how the visit would go. Ryan, joking with the gentleman at the car rental facility, mentioned renting a car that the expectant mother really enjoyed, and we were actually able to get the car! It ended up being a great connection point for us for our visit, and we felt honored to have given her such a special day.

As the expectant mother’s due date approached, it was becoming more evident we were likely going to be her only support system at the time of delivery. We wanted to support her as much as we could, so we traveled to her home state one week before delivery, just in case she went into labor early. As it turned out, she went into labor one week late, so we had ten days to spend together and to help her get out of the house. While out to breakfast one morning, the expectant mother started to mention she was in pain, and as she described the pain, we realized she was in labor and contracting. When we got to the hospital, they admitted her right away, and we started supporting her through the labor process. As luck would have it, her mom was able to get to the hospital late that evening, and we were able to meet her and spend a couple hours talking with her.

We went to our own room late that night to get some rest as she got closer to delivering. In the early hours of the morning, we were able to hear our daughter being born, and the nurse came in shortly after to let us know that both the birthmother and her daughter were doing well. About one hour later, the birthmother’s mom came in to get us, and we were finally able to meet our daughter, Peyton.

Part of Peyton’s birthmother’s birth plan was that she did not want to hold Peyton, so we were surprised to walk in and see her holding her. But it was a beautiful sight. We knew this was one of the best days of our lives and one of the hardest days for her. Meeting Peyton was a dream come true; she completed our family.

Later that evening, Peyton was admitted to the NICU so they could monitor her breathing, and we were able to split our time in there, alongside her birthmother. Peyton’s birthmother chose to spend the night in the NICU with her, again surprising us, but the following morning she signed the hospital paperwork that gave us the ability to make medical decisions. Ryan drove our daughter’s birthmother home after she was discharged and gifted her with a necklace we had bought her. She was already wearing it later that same day when he picked her up to bring her back to the hospital for a visit.

Peyton happened to be born in a city where we had immediate family, and Ryan’s parents brought our son, Hunter, down to celebrate his birthday. He was aware we were going through the adoption process, but we chose to keep the details of his sister’s birth a surprise, just as a precaution in case the adoption disrupted.

The day we discharged from the hospital with Peyton, we went home to our family’s house, and Margaret shared with Hunter that we had a surprise for him. That’s when Ryan walked in with Peyton and introduced Hunter for the first time. He was incredibly shocked and instantly took to being a big brother.

Since Peyton’s adoption, we have maintained contact with Peyton’s birthmother through texts. We are grateful she still remains interested in our lives and Peyton’s, and we love sharing updates and pictures with her.

Looking back on our adoption journey, we recognize that as difficult as this process was for us, it was even more difficult and emotional for Peyton’s birthmother. We had to remind ourselves to stay open-minded throughout the process and that this process was not just about us. Through all the nerve-wracking moments and the unknowns, we stayed patient and understanding, which ultimately led us to our beautiful daughter, Peyton.