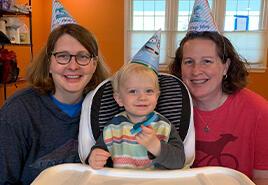 When we first started considering adoption, we considered both domestic and international. We found quickly that domestic adoption was a better fit for our family and started to narrow down our search. As a same-sex couple, we really wanted a partnership with someone who was going to fully respect not only our adoption journey but also our relationship. We had our search down to Angel and one other agency but ultimately decided to join Angel’s program due to their smaller size and intimate feel.

Only one week after our profile was active, we were selected by an expectant mother who was having twins. Leslie was more thrilled at the prospect than Shannon was, but we said yes to the opportunity. Our communication with her was short-lived, but we had a small taste of what it felt like to be hopeful and were excited for our next opportunity.

We had the opportunity to speak with a couple more expectant mothers before our first serious connection. Each opportunity held promise but would quickly fizzle out, and we returned to waiting. About one year into our time with Angel, we were selected by an expectant mother who was early in her pregnancy, but unlike our other opportunities, our communication with her was consistent for three straight months. With the help of our hired attorney services, we started to provide her financial assistance, and she continued to meet with the social worker and provide us updates from her doctor appointments. Admittedly, there were some potential concerns with the expectant mother’s intent, but with only a handful of weeks before her due date, we felt as though we should continue to push forward. About one week before the expectant mother was due, we had plans to visit her in person. When we tried to solidify our plans with her and book our plane tickets, she became unresponsive to us, Angel, and the social worker, confirming our worst fears that we would not be adopting her child.

As we tried to recover both emotionally and financially from the disruption, we were contacted with another opportunity that after only a couple text message exchanges, resulted in nothing. We spent the next handful of months focusing on ourselves and staying busy. We were still emotionally grieving and trying to figure out where things went wrong, but we ultimately knew that wasn’t the child meant for us.

A Long Road to the Right One

Close to one and a half years into our contract with Angel, we were contacted with our sixth expectant mother, who lived only two hours away from us. She had selected our profile from Angel’s website and had been drawn to us because she has a gay sister and loved that our family dynamic would resemble her sister’s future family. After the previous opportunities, we were cautious but open. We spent the weekend texting with her, and our relationship was already feeling more natural than any of our other conversations with expectant mothers had been.

We had the chance to meet with her, her mom, and her sister one weekend for lunch, and after months of texting, it felt great to sit down in person. Our time together felt comfortable, and we were starting to feel as though this might be “the one.” About one month later, we met with her in person again, along with the social worker. During that meeting, we were able to discuss her birth plans, which included us being in the delivery room with her, as well as her wishes for communication after placement. We wanted to follow her lead and were open to any type of communication she was comfortable with; we ultimately settled on an open adoption.

Only a couple weeks after our in-person meeting with the expectant mother and the social worker, she called us late one evening to let us know she was in labor. We quickly headed to the hospital to meet her and ended up beating her there. We were able to meet both her and her mom when they arrived, and we all headed to labor and delivery together. We spent that night and into the early morning supporting her as she needed it and waiting for the birth of our son. When it came time to deliver, the expectant mother was a rockstar and made delivery look so easy. We were able to welcome our son, Everett, into the world alongside his birthmother, and Shannon was able to cut his umbilical cord.

Everett’s birthmother had requested to hold him first, and while it was difficult to have to wait to hold our son, we knew her choice of placing for adoption far exceeded anything we could imagine. That evening we spent dinner with Everett’s birthmother, walking the halls with her and helping to meet her needs. The next day we waited for her approval before we could be discharged and were able to spend time with both her and her mom. When it came time to part ways, we were overcome with emotion and empathy. As new parents, we were over the moon with excitement about adopting Everett, but as we watched his birthmother leave the hospital without him, we were distraught for her and the loss she was going through; there was no amount of adoption education or preparing us for that moment.

After our up-and-down journey through adoption, we now recognize that early in the process, we were trying to make puzzle pieces fit where they weren’t supposed to. Once we connected with Everett’s birthmother, the process felt natural. Our disrupted adoption was emotionally taxing, but it really pushed us to trust the process and that the right expectant mother was out there for us. We just had to wait for her to find us.