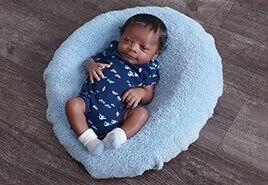 A Glimmer of Hope

After a number of miscarriages and struggling through IVF, we knew it was time to start reconsidering our family plans. We turned to adoption, and after online research, connected with Angel and felt confident moving forward with them.

We were so excited and felt a glimmer of hope for the first time in a long time. We now know we weren’t as prepared as we could have been, but we didn’t know what we didn’t know, and what we did know is that we were ready to be parents.

The first opportunity we were provided with was with an expectant mother in her second trimester. We spent the duration of her pregnancy building a solid relationship and were with her for the birth of her child. She ultimately chose to parent after meeting her child, and we were crushed. In our hearts, we knew it was best that a child stay with their mother, but we’d had so much love and hope invested in her and her pregnancy.

Our disrupted adoption, while devastating, allowed us to grow not only as a couple but also as potential adoptive parents. We walked into each subsequent opportunity with a new appreciation for expectant mothers and the crisis that each one of them was facing. We knew we had to support her wholly and allow her the space to make her own decisions; regardless of outcome, we had done the most we could do. Through this new lens, we had the chance to speak with a number of expectant mothers, but each one amounted to an unsuccessful placement. We didn’t lose faith, but we did feel tested.

When Angel contacted us with another opportunity, as always, we were open. We started communicating with the expectant mother through text messages and immediately started to build a connection. She was already in her final trimester and lived only a couple hours from us. We knew if this felt right, we would be moving forward quickly.

Due to how close we were to her, we offered to visit with her in person prior to delivery, but she opted not to. She did request that we be there for delivery and wanted Renee to be her support person.

It was planned that Renee would be in the room with the expectant mother during her C-section, but due to complications, she had to leave and stayed with Hilary. While we waited to meet our child, we were anxious and excited. This finally felt like it was happening. We were able to meet our son, James, together, and it was the most beautiful moment of our lives.

We spent the next two days in the hospital with James and his birthmother. She chose to meet him, hold him, and feed him. We really wanted to follow her lead and allow her what she felt was best for herself. Upon discharge, we were able to head home right away since James was born in our home state. It was a feeling unlike any other to have our son home with us.

After our first disruption, it was hard to allow ourselves to attach to an expectant mother and her pregnancy; we could not imagine going through the heartbreak we felt the first time. We never felt like we were at ease, but our trust in the process is what kept us moving forward and ultimately led to our connection with James’s birthmother.

We reminded ourselves with each opportunity to remain open-minded and that the right expectant mother was out there for us. Each tough moment led us right where we were supposed to be, and that was with James in our arms.