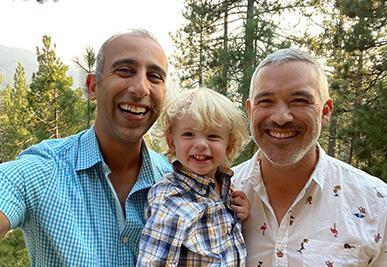 We considered both adoption and surrogacy at the start of our journey. After a lot of research and careful thought, we decided that adopting a baby was the right path for growing our family. While surrogacy has a lot of wonderful benefits, ultimately, we wanted our future child to have the opportunity to know his birth mother. And we wanted a chance to create our own organic relationship with her. If we were going to invest in growing our family, we wanted this journey to develop naturally. We truly felt that through adoption, we could grow our family while having the privilege of getting to know an expectant mother on a more personal level.

We were working with a local adoption company at the beginning of our journey. When we completed our home study and were ready to start the matching process, the company did not have any spots available. We asked for some resources, but they suggested only state-based adoption companies. Rather than limiting ourselves to one state, we wanted to increase our chances of becoming parents by working with a company that helps expectant mothers nationwide — and that was Angel Adoption.

It was not long after our profile went live that we were chosen by an expectant mother. We felt a whirlwind of emotions - excitement at being chosen so quickly and fear about being ready to be parents. After our first FaceTime call, we both knew right away that she was the one - the birthmother of our future child. And it turned out we were right. We ended up building a wonderful relationship with her while she was pregnant. She was sweet, accommodating with our questions, and easy to talk with and get to know. We couldn’t have been luckier or more grateful to her.

We had a difficult time agreeing on a name for our son. We knew that we wanted it to have meaning and culture. In fact, prior to even starting the home study, Juan researched modern Indian names and came up with a short list that he stored away for the right time. At the top of the list for boy names was Elil. Prakash suggested other names, but none of them resonated with Juan in the same way. Ultimately, we whittled it down to two names and decided we would make the decision when we saw him. From the moment Juan held him, he exclaimed, ”he looks like an Elil!” And that was that. Elil means “handsome” in Hindi, and, wow, we have never laid eyes on anyone more handsome than our son.

When we were deciding between surrogacy and adoption, we realized a key difference between the two was the control we’d have. We could have called more of the shots with surrogacy. However, adoption felt more natural for us, even though it meant a lot less control over what happened. Now looking back on the whole process, we see that the things that would stress us while navigating the adoption journey were, in retrospect, small issues. It was a lesson in letting go and putting stressors in perspective. Letting go of that control was what led us to connect with this wonderfully brave expectant mother. Thanks to her selflessness, she made the growth of our family possible.