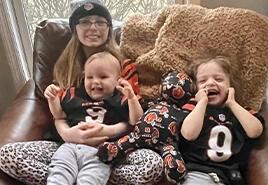 The Best Path for Us

Coming into our marriage, Jen had three children already, two biological and one adopted, so our ties to adoption were already strong; on top of that, Jen herself was adopted. When we met, we already knew Jen could not have more children, and thankfully we both agreed early that adoption was the right choice for us to continue to grow our family together.

Our adopted daughter was a state-involved adoption and a long journey. We knew another state adoption wasn’t the path for us, and we started considering domestic adoption. We connected with Angel based on their values and the openness and care they show expectant mothers. After initially meeting with Angel, we delayed our start only to later find out we were expecting through surrogacy! Once we had our son and were settled in at home with him, we were officially ready to start our adoption journey.

Shortly after joining Angel’s program, we were selected by our first potential mother. We spent a number of months building a relationship with the expectant mother and meeting her in person. It felt surreal that everything was happening so fast. We were able to be with her at the hospital when the baby was born eight weeks early. After spending four days at the hospital with the expectant mother and the baby, she ultimately chose to parent. We were, of course, devastated but knew there were more opportunities out there for us and chose to continue to move forward.

After our first opportunity, we had one more that also resulted in the expectant mother choosing to parent. Although each one hurt, we had faith that the process would work out for us. We had gotten so close two separate times already!

When we were chosen by a fourth expectant mother, things felt different. We had a great, immediate connection, and she admitted she was comfortable with us because of Jen’s experience with our daughter’s adoption and the similarities between the birthmothers. This expectant mother was already in her final trimester, which was also different for us. In the previous opportunities, the expectant mothers were much earlier in their pregnancies, so we were starting to accommodate birth plans and travel much sooner.

The expectant mother had a scheduled C-section and had asked that we be there for the birth. When the time came, we packed up our RV and our two youngest children and headed to the expectant mother’s state. We had packed and traveled before, but this time felt different.

Throughout the entire hospital stay, Oliver’s birthmother was so gracious toward us, and we furthered our connection to each other. She had initially asked for a closed adoption, which we would have respected, but we are so thankful she chose an open adoption. She has become family to us, and we are so thankful to have her in our lives. We speak almost daily, and it has been so special to us to be able to continue to provide her love and support.

A Love With No Bounds

Our journey into adoption was filled with hope but also a peace that defied logic as our hearts had been broken before. We knew it wasn’t going to be an easy journey, but the support of our family and Angel really helped us get through it.