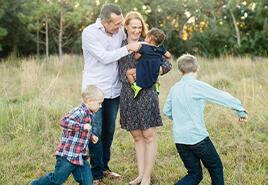 Adoption in my Heart

I have always had adoption in my heart. As a child, my favorite things were Annie and Cabbage Patch Dolls — I loved their little adoption certificates. On our first date, I asked my now-husband if he would ever be open to considering adoption and he said yes.

After we were married, we decided to try to have biological children first and then adopt. Unfortunately, we had three miscarriages, so we decided to start the adoption process. We researched agencies and visited adoption fairs. We chose Angel Adoption because it seemed like the right fit for us, plus it is run by adoptive parents. We started working with them, then learned we were pregnant and had to put the process on hold...twice. (You know the saying if you want to make God laugh, make your own plans? We lived that saying twice!) From those pregnancies, we were blessed with two beautiful boys. The third time we were ready to expand our family, everything was finally aligned, and we adopted our daughter.

We hoped for an open adoption from the start. We were flexible on how that would look, but we hoped to have the opportunity to maintain a connection with our child's biological family.

After about eight months, an expectant mom wanted to connect with us and requested that we communicate through text messages. This was awkward at first, so I just started asking her silly questions like, "What's your favorite color?" "What was your favorite subject in school?" "What's your favorite drink?" Things like that. This really helped. We started talking to her about animals. I texted her some pictures we had taken of a recent adventure we had to see some animals. At the end of a weekend, she told her social worker that she wanted to place with us. The laws in the state she resided in require a social worker visit for her. It took a couple of weeks for her intention to place with us to be official.

We continued to text throughout the following weeks. Going from waiting to be chosen, to talking to someone about placing their baby, to expecting a baby in just six weeks is a BIG change! We so enjoyed getting to learn about our baby's birthmom. I continued with the silly questions, and we learned such fun little tidbits about her that we look forward to sharing with our daughter one day. She even asked me to be in the delivery room with her during her scheduled C-section.

As we came close to the expected due date, communication with our baby’s birthmom slowed down. We were scared. We had already traveled to her state because we intended to be there for the birth.

One day, we got a text from her saying she had taken a last-minute trip to her uncle’s wedding, which was in an adjacent state, and she missed a doctor's appointment. We weren't sure what was happening and feared she had changed her mind.

One morning shortly after that, I was getting our boys ready for an adventure (being trapped in a hotel is hard on kids). Just before stepping onto the elevator, my phone rang. I answered and it was our daughter’s birthmother. Up to that point, we had not actually spoken, we had only been texting. She told me she had delivered the baby and was afraid we would be upset that we had not been there. She kept apologizing. “Are you both safe?” I asked. “Yes,” she answered. Ok, good. They were a few hours away, but safe, and she still wanted to place with us, and how fast could we get there? She kept apologizing for the inconvenience of having given birth in another state, three hours away from where we were, and our plan to be there for her C-section hadn’t worked out. I assured her everything was okay, there was nothing to be sorry for, and we’d be there as soon as possible!

We rushed back to the hotel room. At that point I was still on the phone getting specifics about where to go and what to do. When I got back to the room, my husband, who was working remotely from the hotel, asked, “What did you forget?” I motioned that I was on the phone and needed something to write on. On the notepad he handed me, I wrote the word, “Girl.” After I finished getting all the details we needed and hung up, in a rush of emotion, we hugged each other and then called for our boys to join us. We paused for just a few minutes and shared a big, excited family hug. Then, in a whirlwind, we packed up, checked out, rented a vehicle, bought a car seat, and began our trip to meet our new family member!

Meeting both our baby and her birthmother at the same time was overwhelming. We had so many big feelings. Plus, we had our two older children with us. She had not been aware that legally she had to state the name of the child for the original birth certificate. As we were walking into the room, we heard her say, "She didn't get to see her born, she is naming this baby, I don't want her to have any other name." After that moment, I knew everything would be ok. I felt peace. The hospital was not adoption friendly, and we faced challenges, but none of it upset me.

We got the opportunity to talk with our daughter's birthmom, and she was finally able to ask a question that had been tugging at her heart. "What are you going to tell her about me?" Our answer made her cry with relief. When she spoke to her boyfriend that day, he told her how relaxed and at peace she looked. She told him, "It's because I know this is right."

We agreed to send our daughter’s birthmother pictures, videos, and little notes at least once a month. We don't always hear back from her, but that is ok. We talked in the hospital about how hard she anticipated this being. We agreed that we would continue sending them no matter her response, because she knew that even if it was too hard to respond, she would still want to see them. We have the utmost respect for her wishes. It is incredibly mature to consider what one might want over the coming years. We discussed eventually arranging a visit. When the time is right for all parties, we will do that.

Our daughter knows that her birth family loves her and loves us as part of her family. That is all that really matters. There were lots of delays and paperwork snafus and more money than was estimated in completing the adoption process due to many reasons, but what matters is that our daughter is a member of our family and a happy, healthy toddler.

Advice for the Adoption Triad

To birth families I say, choose a family based on what is most important to you and trust your gut. Our daughter’s birthmother said that our pictures showed that we valued family time, which is something she was looking for in a family.

To adoptive children I say, adults made adult decisions for you and they did their best. Trust that they did the best they could with what they had — they may not have done everything right, but they tried and there wasn't anything you did or could have done that would have changed the journey.

To adoptive families I say, trust the process, trust your gut, and don't stress over the bumps in the road. Know that there will be many, many bumps, but one day they won't matter.