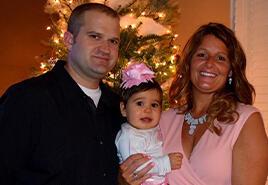 The Best Path for Us

Coming into our marriage, Kimberlee had two children already from a previous marriage. Adam was younger and never married, so the topic of adding to our family was talked about often. As we began to try for a baby, we quickly found we could not have children biologically. Turning to infertility treatments seemed to be the next step. After four rounds of failed IVF and seven failed rounds of IUI, it was clear this was also not working for us. We were going through so much that we knew we needed to rethink how we were going to move forward. There needed to be another way to grow our family together because giving up on our dream was never an option.

We started looking into adoption and fell in love with Angel Adoption right away. Angel was close to us, so the ability to meet with staff was amazing and comforting to us. We loved that they took a limited number of families at a time so we would not get lost among thousands of families. Once we started our journey with Angel, there was someone to help us every step of the way. We were excited to be on our path to growing our family!

There was so much excitement starting our adoption journey, and we felt great about our choice to work with Angel. Kimberlee having two biological children did bring some unique fears that were scary for her to navigate through. Of course we had the typical fears that most parents have coming into this: the fears of not being chosen or adoption just not working the way we had hoped. But would she be able to bond the same way she did instantly with her biological children? Kimberlee felt guilty for even having these thoughts, but she did not let those fears or doubts ruin the dream of growing our family.

We did not tell a lot of people we were pursuing adoption right away. We wanted to tell our parents and get their approval first. Our parents were excited for us but also expressed concern about getting our hearts broken again. All the unknowns that are associated with the adoption process left our parents feeling protective over us, which we appreciated. They were there every step of the way through the pain and sadness of failed infertility. They watched as we picked up the pieces over and over again. The thought of seeing us go through that type of heartbreak again was scary for them. We shared those same fears as well, and that was hard to ignore.

Before we officially started the adoption process, we sat our children down, who were seven and nine at the time. We were explaining that we would start a journey to find the baby meant for our family. We explained that a special and brave woman would be carrying a baby and choose us to be their family. Kimberlee explained that the baby could look different from us because we were completely open in our race preference. Our son asked, “Mommy, what if the baby comes and speaks spanish? I don’t speak Spanish, so how will I communicate with them?” It was the cutest thing to be reminded how innocent children are. The whole family was on board, and we could not have been more at peace with our decision to pursue adoption.

Everything started off slow, and we aligned our expectations knowing this could be a long road. After some time passed, we were chosen by a few birthmothers, but none of those opportunities turned into anything. Some of them chose other families, and some never responded to us. Our coordinator reassured us that everything we had experienced so far was typical and that we were not alone in this.

The Email That Changed Our Lives

We received a call that we had been chosen again! The expectant mother was adopted from China herself and was looking to place. Communication started off slower than our previous opportunity, but we enjoyed getting to know her. The father was in the military, and they were in a serious relationship. Having both of them on board for adoption meant a lot. After getting to know them, we opened an email one day that said they would like to officially ask us to be the parents to their little girl. We were overjoyed and took this as a sign that it was time to end our relationship with the other expectant mother and move forward with them. This was not an easy decision, but we felt it was the right one to make for our family.

Once a week we would chat with each other, and as the due date got closer, so did we! The birthmom asked us if we had picked names out yet for the baby girl. We explained we had three names picked out and sent them to her to choose. She came back right away and said her name should be Harper Jean, and we agreed. Picking a name for the baby was a special moment we were so honored to have.

Around five in the morning one day, we received a call from the expectant mother’s stepsister telling us she was in labor! We rushed to get there, and Harper was born while we were in the air. The hospital where Harper was born really took the time to make everything special. They waited to give Harper her first bath until we arrived, which meant a lot to us. When we walked in, right away the birthmother handed us Harper and said, “Here is your daughter.” We immediately fell in love with the tiniest baby girl but also had so much appreciation and love for her birthmother. From the moment we arrived till we left the hospital, we were with the birthmother and her family. It never felt awkward at all but like this was supposed to happen.

All the fears that Kimberlee had prior to starting this journey of bonding with the baby differently or loving her differently went out the window. The instant love and bond was no different than if Kimberlee had given birth herself. To be honest, it felt like more of a miracle to meet Harper than it was when Kimberlee gave birth. Here we were with this miracle of a baby, and everything happened out of love, bravery, strength, and trust.

It was important to us to allow Harper time with her biological family. We loved getting to know them. When it came time to sign the birth certificate, we had been told to expect the birthmom to put her last name for the baby, but she did not do that. She put our last name for Harper, and in that moment, everything just felt right. The next day, she was discharged, but Harper needed to stay one more day. Kimberlee cried so hard and had an overwhelming amount of respect for her. She had just provided something so beautiful for us, and there she was walking out of the hospital after doing something so amazing and brave.

While we were in the state where Harper was born, we were able to spend additional time with her birthfamily. It felt like we were all family and that we had known each other forever.

After Harper was born, we had an open adoption because that was what her birthmother wanted. There was a lot of communication for the first year, but after Harper’s first birthday, we have not heard from her birthmother much. We can’t begin to imagine how hard this is, so we continue to leave the door open for her and love her so much.

It is no secret that adoption is scary but beautiful. There will always be fear, heartbreak, disappointment, and probably a thousand other emotions while navigating this process, but our best advice is to trust the process.The hardest thing is to know that everything truly does work out the way it is supposed to. Everything we were told was helpful. If we would not have listened and trusted the process, we would not have our beautiful Harper. We also would not have had the beautiful relationship with her birthmother as well. We are forever thankful for them!