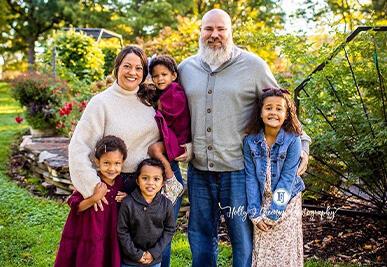 Finding Our Way to Adoption

After trying for children for a number of years with no success, we started down the path of fertility testing. While going through the beginning stages of testing, Nicole had a coworker recommend her cousin, who was an adoption attorney, as a potential option for growing our family. The same day, one of Zach’s coworkers recommended the same adoption attorney. When Zach brought up the idea of adoption at lunch that day, Nicole wasn’t quite ready, but the idea had been planted. Only one day later, Nicole was supposed to be taking Zach’s grandma out Christmas shopping and she mentioned that no matter where our child came from, it was meant to be ours. His grandma, of course, had no idea we had talked about adoption just one day earlier, and it felt like we had all the signs we needed.

We chose to meet with the adoption attorney who had been recommended to us and got on her waitlist. We had multiple opportunities with her over one and a half years that did not work, but then one finally did. Our oldest daughter’s birthmother chose our profile and was local to us. We clicked immediately and were fortunate to be able to attend all of her doctor’s appointments with her. After being connected with her for four months, we were able to be present for Ryan’s birth.

After Ryan’s adoption, we chose to keep our profile active with the attorney, but she was getting more outreach from prospective adoptive parents. We reached out to another attorney on the other side of the state but never heard back. That’s when we found Angel. We’d never considered an adoption provider besides an attorney before, but we felt good about it. They were larger and had a much more expansive outreach.

About four months into our contract with Angel, we got a call from the adoption attorney we had previously never heard back from. She asked if we were still interested in adoption, and we said yes. She told us she would be in touch soon as she might have an opportunity for us. She called us less than a week later with the opportunity to work with an expectant mother who was pregnant with a little boy and due in three months. We opted to say yes, knowing that anything could happen; we didn’t want to miss an opportunity. We were able to meet the expectant mother two weeks prior to her due date and attend a doctor’s appointment with her. She and her husband were choosing adoption together and had placed previously.

We received the call the night before our son was born that the expectant mother was in labor, and we barely made it to her in time. When we finally met our son, Kingston, we gave his birthmother a kiss on the forehead and thanked her from the bottom of our hearts. In the room with her were two of her aunts, whom we had never met before. They both stood up and gave us hugs, which was sweet. We later found out from our attorney that her aunts were there to give their final “okay” of us. Kingston’s biological parents are Marshallese, and it was important to his family that he know his cultural background. When his biological great-aunts saw how committed we were to him, we received their approval.

We waited until after Kingston was born and officially ours before deciding what to do with our Angel contract. We hadn’t been chosen by an expectant mother yet and we assumed it would be a while longer before we were. Less than one month after Kingston was born, we were chosen by our first expectant mother with Angel. We could not believe it. What were the odds!? She was already in her second trimester, and we spent a couple weeks texting with her. She had some questions about how we were going to raise two boys close in age, and we told her we would plan to raise them as twins. We stopped hearing from her shortly after, and it was our assumption that she chose to parent.

Only one month later, our profile was chosen by another Angel expectant mother. We were shocked once again. The expectant mother was already in her third trimester, which meant if she placed with us, we were going to have two babies under six months old. We found out she had previously considered adoption but had ultimately chosen to parent, which did worry us some. When we hired attorney services in her state, it was the attorney she had previously worked with. She knew her history of choosing to parent and her lack of prenatal care. Plus, she knew about her home environment and how unsafe and unstable it was.

We left our weekend with the expectant mother feeling much more secure. Not long after, there were some safety concerns at her home and the potential of DCFS getting involved. To help protect her and her girls, our attorney asked if she would be willing to move to our home state, and she said yes. With the help of some amazing volunteers our attorney knew, they had her moved and settled within 48 hours. With her in our home state, we were finally able to get the expectant mother an ultrasound and attend with her. We found out together that she was having a girl!

When it came time for labor and delivery, we were able to be with her at the hospital, and Nicole was in the delivery room with her. After a tough delivery, our daughter, Riley, was born! She was absolutely perfect, and we could not wait to bring her home to meet her siblings.

And That Makes Six

When Riley was six months old and Kingston was just shy of one year, our attorney contacted us to let us know Riley’s birthmother was struggling. Only a couple days later, Zach asked Nicole to meet for lunch and explained that Riley’s birthmother had told the social worker she could no longer care for her youngest daughter, Kennedy, Riley’s half-sister. We were the first people she had asked to adopt her.

Nicole’s initial reaction was no. Zach, a stay-at-home father, already had his hands full with two children under one and Ryan. We had Kennedy over the following day to play with our family. We were a sight! Ryan, school-aged; Kingston and Riley, two babies; and Kennedy, a toddler. We thought the play date went well, but we still needed Ryan’s input. When we spoke with her later that evening, her sweet, innocent voice told us, “She’s not a baby, and you told me no more babies. She can come.”

With our oldest daughter’s approval, Kennedy officially came to live with us the next day. The sweet baby who had curled into Nicole’s lap less than a year before was now ours, and we were officially a family of six!

What’s Meant to Be

Our adoption journey began with the hopes of growing by one, and by the end, we’d grown by four. Each of our children are special in their own way and came to us the way they were meant to.

Each of their birthmothers hold a special place in our hearts, and we think of them often. For the first year of Ryan’s life, we had visits with her birthmother, but she stopped requesting visits and updates after Ryan turned one. We have a private social media page we share with Kingston’s birthmother that we post updates to, and we will occasionally hear from her. Riley’s birthmother requested no contact after placement, which we always respected. Initially, Kennedy would have visits with her birthmother and older sister, but those stopped after we moved. We have kept in contact with our attorney and know that Riley and Kennedy’s birthmother has found her way and is now a birthmother advocate for the agency our social worker works for.

We consider all of our adoptions “easy” by adoption standards. We leaned on each other, we leaned on the adoption professionals, and we trusted. While our adoptions weren’t complicated, we know we have some tough conversations in our future being a biracial family, but we are prepared and know our support system is behind us.

Our children have been loved unconditionally by us and our families and friends from day one. We wouldn’t change our adoption experience for the world and are so grateful for the difference our children have made in our lives.