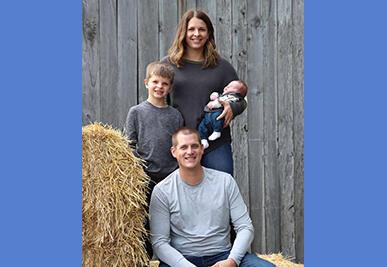 We struggle with infertility, so we turned to IVF initially, which resulted in our amazing son, Leo. However, after Leo was born, we went through three more rounds of IVF, all of which were unsuccessful. We were at a point where we needed to decide to do more IVF or try a different path and pursue adoption. We started looking online and found Angel. We liked how they did mostly newborn adoptions and that their focus was on the expectant mom. After speaking with them, we decided they were the right fit for us. We had already talked with our families about adoption, but they were all so happy to hear we had officially decided to move forward. We started this process during the holiday season and actually told them while making Christmas cookies!

At the start of the journey, we were mostly just hopeful and excited. We were praying for a baby and felt confident we were heading in the right direction. Then, after only six months, we were chosen! We were so thrilled. However, we learned she was not being truthful about even being pregnant. This was really difficult for us to wrap our minds around, and we felt very skeptical moving forward after that. It really caused us to question the entire process, and we had to work hard to continue to trust Angel and to go into each new opportunity with open minds and open hearts.

We talked to two or three more expectant mothers after that and were starting to have a lot of mixed feelings and doubts. Our journey was taking longer than we ever anticipated; COVID happened, and we were already on our second extension of our two-year contract. We were trying our best to be cautiously optimistic, but this was definitely not what we were expecting when we began this journey.

When we got another call from Angel about a new expectant mother, we tried to be open and positive. We learned the expectant mother had not had any prenatal care so far and was estimating her due date to be in a month or so. We ended up hiring legal services a few weeks later. Communication with her had been inconsistent up until that point, but then she kind of vanished. We were feeling pretty down and thought that was the end of it. We were also afraid it would be the end of our adoption journey since it had already been a few years at that point.

One night, after already having gone to bed, the expectant mother sent a text saying she was in labor and on her way to the hospital and asked if we could meet her there! We took a leap of faith and hopped in the car immediately. She was located close enough to us that we were able to get there within a few hours. By the time we arrived, the baby had already been born. The hospital told us it was a boy, but we weren’t able to see him or his birthmother at that time. She kept texting us updates throughout the night, however, and the next morning, we met both her and her mom at the hospital. They were very committed to the adoption plan.

After waiting so long, meeting Eli for the first time was so surreal! Just two days earlier, we had been having dinner with family talking about the end of our contract, and now here we were, meeting our baby. He was in the nursery for a week because his birthmom had presented with potential substance use, but he did not have any withdrawal symptoms. He was discharged soon after, and we were headed home so Eli could meet his big brother, Leo!

Since Eli’s birth, we have texted a bit with his birthmother to give her updates whenever she wants. She had originally wanted an open adoption, and we are totally on board with that in the future, when she’s ready.

Biggest Challenges of the Process

During the process, the biggest challenge was finding our footing again after the initial loss of trust and then just staying positive through all the ups and downs of the journey. To cope with the wait, we tried to focus on continuing to do regular, day-to-day things, making travel plans, and just staying positive. We did not want to stop living our lives.

After connecting with our son’s birthmother, the inconsistent communication was really the most challenging part. Ultimately, we had to trust the process! Always remember your “why.” If you know you want to expand your family, don’t give up, even when trusting the process feels impossible. You have to always keep your “why” at the forefront.