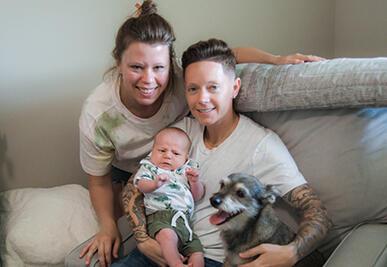 Finding Our Way to Adoption

After a number of failed attempts at fertility treatments, we found ourselves at a crossroads: Did we want to invest more time and finances into pregnancy or pursue adoption? Michelle’s mom was adopted, and we’d always been open to it. The idea of bringing our family together through love instead of biology was something that spoke deeply to us, and we switched paths.

We started our home study with a local agency and found it was a lot more involved than we anticipated. As we worked through our home study, we also started looking for adoption providers to partner with. Our home study agency recommended that we look outside of our home state, so we started additional research.

While researching, we decided to put ourselves out there on our own adoption social media page. We figured it didn’t hurt to try, and not long after, we had an expectant mother reach out to us through our Instagram page. We were thrilled initially, but that quickly shifted. The expectant mother was both verbally and emotionally abusive toward us, and we later found out she had stolen her pregnancy identity from another pregnant mother. We were both shocked and deeply hurt. We were almost turned off of adoption as a whole, but it also solidified our need to work with a professional.

Once we found Angel, we knew we had found the partnership for us. From the beginning, they were welcoming and transparent with us. We felt great starting their program, and that good feeling was confirmed when only one month after joining, on Renee’s birthday, we got a call that our profile had already been chosen. We texted with her only a handful of times before she ghosted us and told Angel she had lost the baby. We later found out she had the baby and chose to parent, and while we weren’t mad at the choice she made, we were hurt she didn’t trust us enough to tell us the truth.

Just two months later, we connected with an expectant mother who reached out to us via our adoption social media. After positive communication with her, we took a road trip to her home state and met her and her family members. Our visit went really well, but as our relationship continued, there was a moment when it shifted and things no longer felt as comfortable. We had wanted an open adoption and were nervous that in the future, we were going to have to close the door to her and didn’t want to do that. We ultimately decided to end our relationship with her, and thankfully, she was incredibly understanding.

Only a couple of months after we disrupted our last opportunity, our profile was selected by an expectant mother who reached out to Angel. She had chosen our profile and another family’s, and she was really early in her pregnancy. We were hesitant and still reeling from the previous three opportunities, but we went into the conversation with open hearts and minds. We spoke with her the same evening and found her to be honest and wonderful. She told us she needed three days to decide between us and the other family, and we found that to be very fair and transparent.

As soon as we hung up the phone, we were both in a little bit of shock. We knew we just had to wait and see what happened. We also knew that if she picked us, we had a long connection ahead of us, almost an entire pregnancy. It was scary, and we knew it was going to require a lot of trust in ourselves, in her, in the stars, and in the unknown.

It only took the expectant mother one day to decide between us and the other family, and she chose us! That officially started our six-and-a-half-month connection with her.

We dove into our long connection head first. We started texting almost daily and were lucky to be part of her doctor’s appointments via FaceTime. She was such an amazing woman with so much love for her young son and her unborn baby. She would share with us “bump updates,” and during her 20-week ultrasound, we all accidentally found out the gender together; it was a boy!

About three months before she was due, she and her son came to visit us. She wanted to see where we lived and meet our support system. We completely understood her desire to see where her son would be raised and welcomed her with open arms. We ended up scheduling a 3D ultrasound while she was in town and made matching stuffed animals with the baby’s heartbeat in them. Our friends and family were so wonderful when they met her, and on the morning that they were headed home, she and her son got to play in the snow for the first time. The entire weekend felt magical and so right.

As the expectant mother got closer to her scheduled c-section, we started making our travel arrangements and eventually headed 14 hours south to her home state. It was the first time we were seeing where she lived, and it was so special to meet her community less than 24 hours before our son was born. We had the opportunity to take her to dinner with her family and extended support system. It was amazing to sit around a table full of people who supported her, loved her, and cared about her. We could feel the love for her and us at the table that night.

We were lucky to be able to stay in the hospital with Wesley, in a room down the hall from his birthmother. We took turns visiting back and forth, and his birthmother had friends and family come to meet him. Wes’s birthmother chose to hold him a couple of times, and we took some super special photos together.

She asked that we all be in the room together when she signed her consents, and we were grateful to be able to support her during that time. Our time at the hospital was phenomenal. The nursing staff was so great to all of us and admitted they weren’t used to positive adoption relationships and that ours was beautiful to watch unfold.

Prior to leaving Wesley’s birth state, we had the opportunity to see his birthmother and her family one last time. Her grandmother made a full Southern home-cooked meal for us and went all out. Renee’s mom had joined us at that point and got to meet Wes’s birth mom and close friend as well. It was incredibly special to be able to blend our families together for the evening and see the love that surrounds Wes.

The start of our adoption journey was not an easy one, and coming into Angel’s program, we had to work very hard to view each opportunity as new. We could not let our emotions from the last failed opportunity carry over; otherwise, we knew we would not be successful in this process.

Wesley’s birthmother has been a true blessing in our lives, not just for choosing us as Wesley’s parents but because of how absolutely amazing she is as a person. The love and care she has for us and for Wes is extraordinary, and we are forever grateful to have her in our lives.