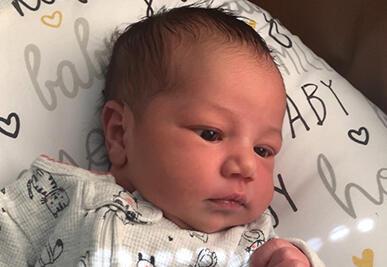 Starting a family together was always important to us, and we first attempted to get pregnant in 2013. Unfortunately, things didn't work out the way we thought they would. It was a mystery as to why we could not conceive, which only added to the frustration. We both had children separately with prior relationships, so we went into this thinking it would not be an issue to start a family together. We decided we needed to look at different paths, such as IVF or adoption. We looked at pricing with IVF, but we were afraid that even if Christina would become pregnant, we would not get past the second trimester, like all the times before.

We decided to look into adoption and checked with a few agencies. A friend who adopted recommended Angel Adoption to us. We loved the different messages on the Angel website and that it was a women-owned company. After meeting with staff, we were accepted and so excited to start our adoption journey. It felt like there was hope again, and that felt great.

We had no idea about the timeframe and how long this would take, but a few friends said it would happen quickly. We soon found out that would not be the case for us. Our process would be a slower one, but we still trusted that in the end, it would work out. When we started, we were gender specific and race specific. We wanted an African American/Hispanic child and were only open to closed and semi-open adoption. After we got into the process, we decided we should stop limiting ourselves. Our objective was to be parents. We called our Adoptive Parent Coordinator and opened all of our preferences up.

Many Ups and Many Downs

Our first opportunity was with a woman who had a four-month-old baby boy. We had a great connection, and we communicated almost every day for a month. Once the attorney was involved, she stopped responding to everyone. We were worried about her and wanted to make sure she was safe. Even though that first opportunity did not work out, we were thankful to be chosen.

After some time passed, we were chosen again by an expectant mother who said she was about 60% sure she wanted to place. This was nervewracking but also comforting knowing she was forthcoming with where she was so we could align our expectations. She ended up parenting, and we started to feel discouraged with our contract time now running out.

A few months later, the first expectant mother we spoke to reached out again. We could not believe she had reached out after all this time. The baby boy was about seven months old at that time. She apologized for not reaching out and said she knew the baby should be with us. We were so happy to hear from her and know everyone was safe. We continued to talk, and we got attorneys involved at that point. The baby boy turned one, and we bought him a present. We flew them to see us so we could meet and get to know each other more. The child stayed the night with us, and we fell in love with him of course. She was 100% sure and on board, which made us feel so comforted and confident. The birthfather was in jail and had never met the baby boy before. Once he was out of jail, he met his son and did not want to place their child for adoption. We did not want to take anyone’s child, so we respected their decision because we only wanted this to work if both parents were on board. They are raising their child together, and she reached out later on and shared a pic and said they are doing great. We were so happy for them and their little family but still hoping to have a family of our own one day too.

We were chosen again by an expectant mother who wanted to talk to three families. Our communication with her went great. She told us she wanted us to have a baby and that she wanted to place with us, but we did not want to get our hopes up because of what had happened so far along our journey.

Another expectant mother reached out who was due in the same month. We talked with both of them, not really knowing what would happen. The expectant mother had her baby and found out the next morning that she had COVID. She had to be quarantined with the baby. She did not want to place because she had boys and wanted to parent her baby girl. We were heartbroken, but this had happened before, so we knew we would get through it.

We had not heard from the other expectant mother for about a week, which added to the disappointment we were already feeling. Normally we would hear from her every other day. We had an email from her, and she apologized that she had been absent and said she was going through a lot. She was feeling alone and needed some time. We continued to communicate and to try to support her any way she needed.

She was going to be induced and wanted to meet before she went into labor. This was exciting, but we still were trying to not get too excited. We went out to dinner and bought her a gift along with a gift for her three-year-old. We had a great time, but we were so nervous. The moment we met with her, all our nerves went away. Morgan was so easy to talk to, and we enjoyed our time together.

The next day, we drove to the hospital, and she was induced but did not give birth until the day after that. She said we both could be in the room, which made us so happy. Miguel cut the umbilical cord, and we gave the baby girl her first bath. We were in the room close by, and the baby would go back and forth between the birthmother and us.

We truly believe our baby girl, Brooklyn, was always meant for us. People tell us she looks just like us, which we always love. We could stare at her all day because just looking at her makes our hearts melt. You go through the pain, and then you see the baby and everything melts away. All the downs we had to go through on our adoption journey were out of sight and out of mind now. We would do it all again if it meant we got to be Brooklyn’s parents.

The hardest thing for us was getting excited about an opportunity and then it not working out. It feels like a loss even though you know there is a possibility it won’t work out. It is also a loss to family and friends, who get excited with you. We felt like we were letting them down.

Do not be discouraged, and do not give up. It could be a quick process, but it could be a very long process with some disappointments. If you have to go through a lot, don’t give up but keep going. You can still have a good outcome even if it does not happen as quickly as you would have liked.

We are very thankful to our birthmother and we still stay in contact with our birthmother using an app called Tiny beans which has been a huge help. We can post pictures of Brooklyn anytime and whenever the birthmother feels up to it she can view all the updates. Being Brooklyn’s parents would have never been possible without Morgan and we feel so blessed to have both of them in our lives.