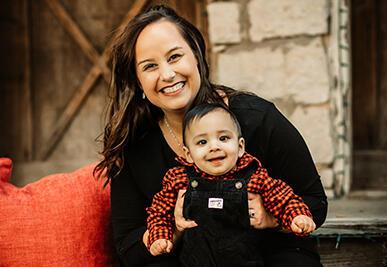 I always knew being a mother was important to me and something I wanted to do. There was a timeline that I promised myself I would stick to, which was that by 35, I would make my dreams come true one way or the other.

Adoption was always an option for me, so now it was time to find an agency I could trust. I came across Angel Adoption, and the transparency on the website was amazing. Other companies were not that way, and it made me uncomfortable. Reading about recent adoptions and stories made me hopeful, and I knew Angel Adoption could help me.

There were a lot of unknowns when starting my adoption journey, and putting it in God’s hands was hard. I remember choosing preferences but knowing in the end, the child I got to parent would be the one meant for me. It is a learning curve, and I am glad I embraced it. I gave up all control, trusted in the process, and put my faith in God.

I only told my close friends and immediate family that I was adopting. Everyone was overjoyed, welcoming, and open to the idea. They were so supportive and excited for me, which made everything a little easier. They all wanted updates throughout the journey of course. It is safe to say having a support system is amazing.

Soon after I joined, an expectant mother chose me on my birthday, and she was early on in her pregnancy. When we started communicating, my profile had only been active for about two days. I felt so lucky to have an expectant mother who wanted to communicate with me. She thought the baby was a boy, but she was early on, so this could change at any time.

Angel staff had told me communication could change throughout getting to know an expectant mother, so it was not surprising that I lost touch with her for five or six weeks. She found out that she was having a girl at one of the ultrasounds and after that did not communicate so I naturally thought she had decided to parent. I stayed hopeful and trusted the process. No matter what I believed, the baby meant for me would be the baby I was lucky enough to parent.

After some time of no communication, she had reached out and shared an updated sonogram that confirmed the gender of the baby to indeed be a boy! She had reached out and I had the chance to meet with the expectant mother before the birth of the baby. We went to dinner and enjoyed getting to know each other. A week before she gave birth, she wanted a 4D ultrasound, so I was able to take her for that experience. I got her a stuffed animal with the baby’s heartbeat. This was so meaningful, and I loved that she had something so special to keep with her at all times.

She asked me when I thought the baby would be born, and I told her I had been having dreams that a boy was born on St. Patrick’s Day, and he ended up being born on that day! What are the chances that my dreams would quite literally come true? We continued to chat and support each other.

Around two in the morning, I received a text from the expectant mother that she was laboring. She was three centimeters dilated, so I left to drive down to her. It was baby time, and I could not believe it was happening. I got to the hospital early that morning, and she was about to get an epidural. I went to the waiting room to give everyone space while she received it. The nurse came and got me to be with her once they were finished. Once they induced her, everything went really fast. Before we knew it, a baby boy was born and I was cutting the cord and giving him his first bottle.

After the baby was born, the hospital gave me a room down the hall. The birthmom wanted to keep him in the room with her, which I respected. During relinquishment, the birthmom became very emotional, and I thought she was going to keep him. She was positive for drugs, but the baby was negative, which I was thankful for. CPS was going to get involved and the birthmom knew she would not be able to parent, but she still had a choice. I asked if she needed space or time, and she asked to be alone for a little while. I went to go get her something to eat, and when I dropped it off, I told her to text me if she needed anything. It was important to me to be there to support her through this time.

As I waited to hear anything, I wondered if this would all work out. I remained hopeful and again trusted that whatever was meant to be would be. The birthmom messaged me to come down to her room, and we watched TV. The next day, she seemed better emotionally and more positive. She was due to sign paperwork later that afternoon before she was released from the hospital.

She signed, and then they came to have me sign. After everything was done, I went to the birthmom’s room to pick up Cason. I asked if I could pray for her and give her a hug. This was a special moment. As I left, it was emotional for the both of us, but we did remain in touch after that day.

When navigating your journey with adoption, it is going to be so important to remain hopeful. Trust that the baby you're meant to parent will come to you. Treat everything like it is a job interview because this is the most important job you will ever have.

I love that I have a relationship with Cason’s birthmom, and the door is always open to have as much communication as she wants. I have so much respect for her, and that respect was always something I showed her throughout our time together. I will forever be thankful for her sacrifice and for Cason.