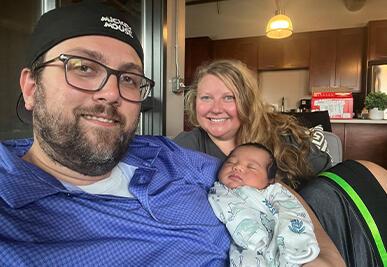 We always wanted a family, but becoming pregnant on our own was not working out. We knew it was time to look into other options. Adoption was something we learned about and felt drawn toward. Finding a company to help us with adoption became easy once we were part of a Facebook group full of adoptive families. We kept getting recommendations by other families to use Angel Adoption.

Having talked with others about their experiences with adoption, we knew there was not any guarantee this would work out. It was so scary for us to not have that guarantee, especially when we wanted it so badly. We were also excited, and we were not going to let our nerves stop us from navigating adoption. We would much rather try something and fail than never try at all.

Many Ups and Many Downs

After starting our journey with Angel, we were chosen for an opportunity, which was very exciting. The expectant mother was not involved much, so the expectant father was the one we were communicating with most of the time. Everything moved so quickly, and we became connected. They were asking for money all the time, and soon it became something we no longer could afford or navigate. With that opportunity ending, we were a little bummed since we were so excited to have been picked.

We were chosen by an expectant mother again, and we talked and got to know her for about six months. Building a relationship and going a little slower this time was nice. We were asked to meet in person, which was very exciting. The expectant mother was very young and said she was just too young to parent her child. We felt really good about this opportunity, but it was only a matter of time before we were faced with another disappointment. The expectant mother gave birth, and we bonded with the baby for two days before she decided to parent.

We were so devastated and quickly learned that no matter how great something feels, it does not mean that she will place. An expectant mother can change her mind at any time during the pregnancy and at birth. We received a lot of support from the Facebook group we were a part of, and parents told us how common this actually was. It was a good lesson and prepared us for navigating the rest of our adoption journey.

After aligning expectations and being patient, we received another call from Angel staff. An expectant mother was looking to place and chose us out of all the families she could have chosen. We met with her in person and got along great while building a relationship with her. Our parents came to visit us and knew we were talking with the expectant mother. They were so excited for us and supportive. We told them she was going to be induced, and while they were traveling to us, she went into labor. It was baby time!

The expectant mother told us she did not have a lot of support and asked that we be in the room. We told her absolutely and that we were honored for the opportunity. We all packed up, parents and all, and went to the hospital for the delivery. The hospital was great and put Julie’s name on the board along with the birthmom. Julie truly felt included and supported by every member of the hospital staff. We were able to cut the cord, which was an experience we never thought would be possible. Saying we were thankful every step of the way would be an understatement.

We stayed with her and the baby. We were so excited to be holding this beautiful baby girl, but it was hard to get too excited because of what happened to us when we were at this point of our journey before. We cried when we were holding the baby girl, and we named her Dakota. We made sure her birthmother had what she needed and tried to help her because she had a language barrier. We bought her a basket with some things in it and wanted to make sure she was comfortable and supported.

We went to the Airbnb and waited for ICPC to be over. We were still emotional and nervous, but the birthmother kept telling us she was not going to change her mind and tried to reassure us. We still have a relationship with her and update her on how Dakota is doing. We are Facebook friends, so she knows all the fun stuff we are doing. We have video chatted and keep in touch, which is something we are thankful for.

We were numb to the whole process and tried to stay very busy, but that did not stop us from worrying. We worried if it would work out or if anyone would choose us. We quickly found that being patient and not thinking about the adoption made things easier. Having a support system and trusting that everything would work out helped. We believed and trusted that Angel Adoption was doing everything that they could to ensure we successfully adopted. All Angel staff work so hard to make everything happen and to help each family they work with. We were so thankful and appreciative of that.

The waiting and the uncertainty will be hard, and there is no way around that. Stay strong, stay patient, and trust your team of people. We are forever thankful for our daughter’s birthmom and everything she gave to us. Dakota made us a family, and we love her very much.