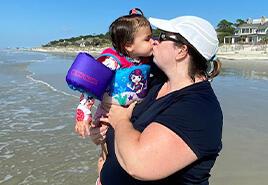 I always knew I wanted to be a mom, but I never really had the desire to get married or pregnant. I had looked at other options to grow my family as a single woman, but they just didn’t feel as right as adoption did. Before finding Angel, I had looked into other adoption professionals. However, I found that some had religious views that would not allow them to work with a single woman. When I found Angel’s website, it really resonated with me! I especially loved seeing the photo of two dads who were able to be parents. This was what really helped me to make the decision to move forward with Angel.

As soon as I started my journey with Angel, I felt secure with them. I also utilized the information that was available to me from Angel and communicated with different staff members. I knew that realistically, it was important to navigate the adoption journey with patience and that waiting was inevitable.

My friends were all super wonderful. My niece and I are super close, and she even traveled with me to pick up Maddison. The older members of my family did not really know what to expect when I first entered the world of adoption. I think it is because they really did not understand the process. Also, when it came time for the revocation period after I had picked up Maddison, I was so stressed I did not know how to prepare myself let alone others. Now everyone absolutely loves Maddison. My mom really enjoys spending time with her. This process has really opened up a lot of people’s eyes. People who are not involved in this process may not really understand, but this journey and their love for Maddison has shown them so much and helped them grow as well!

I did meet Maddison and her birthmother in person before placement. Maddison was about six months old when we became a family, so our story is special in that regard. I was nervous on the drive there but also kind of at ease. Maddison’s birthmother brought Maddison as well as her own mom to the meeting. It was really nice to have the opportunity to meet her mother as well. Maddison’s grandmother was at ease after meeting me, so that really helped Maddison’s birthmother to become more comfortable.

My niece and I drove together to her state to meet her. I will never forget the moment the three of them came through the coffee shop door because Maddison and her birthmother are both so beautiful that they absolutely took my breath away! We had some pizza, walked and talked, and got to know one another. She let my niece and me hold Maddison and feed her too. After this first meeting, Maddison’s birthmother would bring Maddison to visit me at the hotel I was staying at nearby. I think these visits helped reassure her and give her some peace of mind.

The Heart Is What Makes It Great

I had been connected with two other expectant mothers before meeting Maddison’s birthmother. Then, after becoming connected with Maddison’s birthmother, she changed her mind a few times throughout the process and even chose a different family at one point. Eventually she let me know she was ready to proceed. As we were about to leave the state to head home on a Friday, Maddison’s birthmother let me know she could not go through with the adoption. I was so sad all weekend. Then I got a call the following Monday that she was ready to go, and we met that evening. I was almost ready to walk away at this point. I could not really do this to myself any longer, but I decided to go there and see what had happened. I am so glad I did!

Maddison’s birthmother still had 30 days to change her mind during the revocation period. I felt like I could not breathe during that time; it was beyond stressful. When that time was up, I could finally breathe again!

At first Maddison’s birthmother had decided she wanted an open adoption. Now we have more of a semi-open adoption. We communicate mostly through text a few times per year. We have spoken about meeting in person, but it has not happened yet.

The Beauty of the Journey

I really feel like everything in the adoption journey was hard. Loving Maddison was the only thing that was easy! The biggest challenge for me was the mental part of it. Anxiety is another part of the journey that makes it tough. Even though I had very little control, I also knew things would happen how they were supposed to. Now it is really beautiful to look back at our adoption journey! It is just amazing that a birthmother can love a baby so much and allow someone else to be a parent. It is really a very beautiful thing.

When it comes to adopting again, if I had an unlimited amount of space, resources, and finances, I certainly would! Maddison is a very active girl, and we joke she is as active as having a couple of children! The home we live in is the perfect space for us now, and I think for now, our family will remain just the two of us. Maddison is also very close with my niece’s daughter. My niece ended up finding out she was pregnant while we were picking up Maddison, which is so special. It seems meant to be!