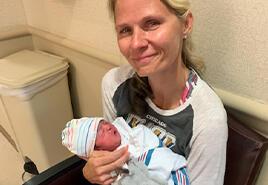 My road to adoption was a surprise one that I did not know I was going to take. Life was going well, and I had been in a serious relationship for ten years. My boyfriend at the time had children already, and we were planning on adding to our family, that was, until everything took a turn. When I was 37 years old, I had a stroke. In a split second, my whole life had changed, and so did my plans.

I wanted children and assumed that would be part of my life plan, but after my stroke, I found out I would not be able to conceive children. Hearing this news was devastating, and for some time, I felt like it was God’s way of telling me I was not meant to have children. Me being the determined person I was, however, I did not let this bump in the road become a roadblock.

All Signs Led to Angel

After some time had passed, I made the decision to start looking into adoption. Being a single woman, I figured there would be some hurdles and obstacles, but I never imagined what was truly in store for me. I reached out to several agencies only to have them not even want to talk to me because of my marital status. It was discouraging to say the least, but then I came across Angel Adoption. I loved the name but also what Angel stood for. I am a huge believer in life showing us signs, and when I called to talk to an Angel staff member, her name was the same as my name. There would be other signs that led me to believe I did not choose Angel but Angel chose me.

Angel took the time to calm a lot of my nerves about being single. They showed me other stories of single women they helped successfully adopt. Angel never sugarcoated anything or guaranteed anything, yet I felt like with their support, I would be able to grow my family. After my initial meeting, I chose to buy the most expensive lotto ticket ever, which was signing on with Angel Adoption. I told myself that whatever happened was supposed to happen, and I was okay with that. I felt scared because of the unknowns but also excited at the same time. Angel and my social worker prepared me for what could be the ups and downs of adoption so I felt ready. My family was apprehensive and protective but also so supportive and happy for me. It was becoming real, and I was all in for whatever would happen.

I signed on with Angel in late summer and was expecting to wait a while based on what I had read and learned, but after about two or three months, I received a call from Angel staff. The week prior I had talked to my coordinator, so my first reaction was that she was calling to follow up after the call. I was sitting at my desk at work, about to go to the Christmas party, when I answered the phone. She went over the information with me, and I instantly went into a panic. Was this really happening? Was I receiving a Christmas miracle?

Over the next few months, I would start to build a relationship with the expectant mother. She instantly felt like a little sister, and I was protective of her. We texted all the time, and I was truly loving getting to know her. We decided it was time to meet, so I met her at a restaurant where she and some friends were waiting. I am naturally a pretty shy person so I was so nervous, but the moment I sat down, it felt like we were all old friends having dinner.

She also invited me to an ultrasound where we would find out the baby she was carrying was a baby girl. I was so excited and would eventually go see her a few more times to be there for appointments. I felt included and a part of the process throughout her pregnancy, which I truly appreciate to this day.

One day I received a call that the expectant mother was in labor. I was so excited. A lot of the next few hours seemed like a blur. I got halfway to where she was only to find out it was a false alarm. I turned around and went back home feeling like I was prepared now for when this would really happen.

A week later I would receive another call that the expectant mother felt like she was in labor again. This time it was so close to her due date I decided to just go and stay with her whether she was in labor or not. I could not allow myself to miss out on any special moments. When I arrived at 1 a.m., I went to my hotel room and rested. The next day, I met with the expectant mother and her mother to have dinner. We wanted to walk the baby out since the doctor told us she was dilated centimeters and could possibly start labor at any time.

I took the expectant mother to the mall, where she walked and walked for what seemed like forever. It must have worked because she went into labor quickly after that. By 7 p.m. that night, the expectant mother called and said they were going to the hospital. This was it! As they walked into the hospital together, we were joking and laughing. I later would find out that not only was I waiting at the hospital to see my daughter but my best friend was at the hospital giving birth—just another one of those many signs to show me everything would work out.

The expectant mother and I had talked about me being in the room and came up with a plan that felt right to her. All the emotions were flooding over me with the realization that I could be a mom in less than 24 hours. By 8 a.m., Charlie was born. The birthmother had done amazing! I told the birthmother I wanted her to have as much time with Charlie as she needed or wanted. I knew that could cause her to change her mind about parenting, but I did not care as I felt it was important for the birthmother to have those moments.

Charlie’s birthmother wanted me in the room with them, so we shared a room for the next day or so. I take pride in being a woman in construction and being a tough girl; however, the minute I held Charlie, I crumbled and became emotional. I could never imagine being in the position Charlie’s birthmother was in at that moment and needed to honor her the best way I knew how.

After arriving home with Charlie, I wanted to encourage whatever level of involvement Charlie’s birthmother wanted. We have a great relationship that Is important to me to maintain. I want Charlie to be able to know where she came from and know she is loved by so many. We text and send updates about Charlie often. The door is always open for the birthmother as I feel that is what Charlie would want.

My advice to other waiting families is to trust the process. Find a core support system to be able to talk with when you are in need. Having my social worker talk me through things, along with my Angel coordinator, was helpful because they have seen the miracle of adoption. Something to remember is that the baby that is meant for you will find you no matter what.

I am so thankful for my friends and family who supported me through my adoption journey. I am forever grateful to Angel and Charlie’s strong birthmother, who trusted me with the greatest gift of all. There is nothing more beautiful than adoption and no one more amazing than a birthmother.