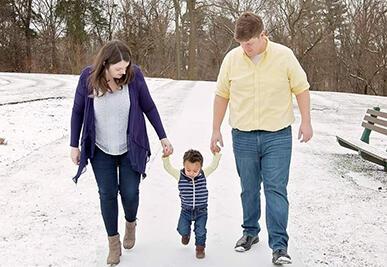 We had difficulties getting pregnant on our own. When we looked at our other options, adoption made the most sense for us. We had talked about it previously but were seeing it with a fresh perspective. Even without a lot of knowledge or personal experience, we knew it was the right path for us. It was exactly how we wanted to grow our family.

We were not going to settle for an adoption agency whose values did not align with our own. Even though we are a heterosexual couple, we loved that Angel Adoption was inclusive to all families. It would not have felt right to work with an agency that discriminated against anyone. Also, we wanted to work with a company that respected and supported expectant mothers. We found that in Angel Adoption and felt very comfortable signing our contract with them.

When our contract began, we felt the normal anxieties and excitement. We had so much support from friends and family, though, that we never felt alone in our journey. We felt compelled to be as prepared as possible for the process. It gave us a sense of security to be physically, mentally, and emotionally ready for anything that could come our way. We spent time getting our home ready for a little one, and we educated ourselves as much as possible about adoption. We maintained our stance that this was always going to be an expectant mother’s decision.

Much to our surprise, we spent a lot of our time engaged with different expectant mothers. There wasn’t a lot of sitting around and waiting for us. We communicated for months at a time with expectant mothers who were considering adoption. Obviously, they didn’t all end with a successful placement, but we supported the women’s choices 100%. We felt disappointed in the moment but felt happy they had made the best decision for themselves.

We were feeling confident in our experience talking to expectant mothers and always knew the right situation would come along at the right time. We heard about last-minute situations when a mother already delivered and decided on adoption for her baby. We were ready for a call like that but honestly didn’t expect it to happen.

On a Monday morning while we were both at work, Angel called us about a baby boy who had been born six weeks early. His birthmother had decided on adoption and picked our profile! We immediately headed their way. Thankfully, it was within driving distance, and we arrived at the hospital a few hours later.

Even though Quinn arrived six weeks early, his birthmother had been thinking about adoption for a while and felt confident in her decision. We got there two days after she had delivered, so she was rested and on her way to recovery by the time we met. It was an incredibly positive and encouraging experience. She greeted us with open arms and brought us to the NICU to meet Quinn.

The whirlwind of the day started to settle down. We spent hours in the NICU that first day. We ran into some hiccups when child protective services tried stepping in. There were a few days we were not allowed to see Quinn. It was hard, but his birthmother visited him so he was never alone. Her love for him inspired us. She was adamant that she wanted us to adopt Quinn. We supported her the whole way through and finally got the news we were waiting for.

A social worker called to let us know we would be adopting Quinn. We could finally breathe again. The weight on our shoulders dissipated. He was ours. His birthmother had named him Rain, which we chose as his middle name in honor of her. We visited for his first birthday and went to the beach. She said he was in the right place with us. We have so much respect for her. Quinn has framed photos with his birthmother in his room, and we love sharing our story with him. As he gets older, we will continue to share the details and remind him of his birthmother’s strength. She will always have a place in our hearts.

Each corner of the adoption triad comes with its own difficulties. With knowledge comes power, and that’s our biggest piece of advice to other adoptive parents. Educate yourself before, during, and after your adoption journey. Take classes, go to seminars, and hear other people’s stories. Put some reality behind the myths and fears. Put yourselves in the birthmother’s shoes. See the experience from her point of view.

We took every opportunity to learn about adoption. Nothing about the process felt like a challenge or inconvenience. There are no “hoops to jump through”; everything is in its rightful place. Take joy in knowing that everything you’re doing is preparing you for this journey and to become the best parents you can be.

Another Chapter in Our Beautiful Story

Some people don’t want to hear about the likelihood of disrupted adoption plans. For us, it helped us balance our expectations in our journey. Normalizing the potential for disappointments made them easier to overcome. That doesn’t mean it wasn’t hard, but it kept our faith in the process strong. Every situation we went through is another chapter in our story, and our story is a beautiful one.