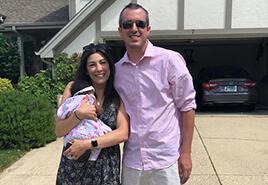 Presents Under the Tree

We have been together since high school. Even back then, we fantasized about having a family together, which included adopted children. I even had a friend in high school who was adopted. When we finally got married and having biological children wasn’t in the cards for us, the choice between fertility treatment and adoption was easy.

Lindsay’s mom had a coworker who went through Angel Adoption to adopt his child. The various options for adopting domestically and internationally were very overwhelming, so when we found out this coworker had started the process through Angel a second time, we decided to meet with Angel too. After our first meeting with Angel, the process seemed a lot easier to navigate. We were both excited and nervous at the thought we could become parents at any time, possibly with little to no notice.

A Mountain of Challenges

Our first chance to talk to an expectant mother came about five months after we signed the contract. We were super excited to have found her and video-chatted with her that day. Over the course of the two-hour conversation, it slowly became apparent to us that she was not a viable option for us. She started talking about living in our basement and wanted us to invite her friends and family to the gender reveal party we would throw for her. We wanted an open adoption with a birthmother for the benefit of our child, but we didn’t think we could accommodate her needs and desires. We made the very difficult decision to say no to the connection even as we questioned whether or not this was our “one shot.”

A few months later, we connected with the woman we thought would be our child’s birthmother. We were very enthusiastic about working with her, especially after we drove out to see her after talking for a few months. Then she didn’t communicate for a few weeks. Eventually, she resurfaced again. But when she resurfaced, things were different. She made a lot of requests for money, and her attorney was downright nasty to us at times. Right before she delivered, she told us she didn’t want to move forward.

To make matters worse, we’d announced the due date to our friends and family. With each text they sent asking how we were, we felt like we were living through the traumatic ending over and over again. We were also upset because we had to turn down another connection opportunity during our time talking with her. Had we lost another chance? It was a major letdown to be sure, but we recuperated by going on vacation.

While we were on vacation out of the country, we began talking again with an expectant mother. We talked to her for a few months. We liked talking to her even more than our last connection. We did frequent video calls and texted with her on a daily basis. She became a friend, and Lindsay talked to her even more than her own sister. This time it really felt like the one. We felt she was genuine. We developed a relationship based on trust and flew to see her twice before she was due. We really felt we would know her for a long time, and we wanted her to be taken care of.

A few days before she was due, her boyfriend came back into the picture and said he would not allow the adoption to go through. Due to some of the issues she had with him previously that she disclosed to us, we were more scared for her as our friend rather than becoming concerned about our adoption. We still think about her frequently and wish her and her baby well.

Staying positive was a real challenge throughout the process. Going on vacation after our first real connection failed was very beneficial for us. We are very close as a married couple, so we helped each other stay anchored. We’d remind ourselves that as much as we wanted to be parents right now, every failed connection just wasn’t meant to be, and we’d have that much more time together alone.

Christmas was difficult. During Christmases, when we thought we’d have a child and gifts under the tree, it was just the two of us again. At some point, we had to adjust our mindset. We thought, “Hey, let’s just enjoy being together. Let’s store the baby stuff in the closet and just live our lives. Our life is plenty good.”

That’s exactly what we did.

Our Turn to Celebrate

One day we got the call again. An expectant mother was about a month from her due date. We talked via text and were cautiously optimistic. We had planned to talk over the phone or via video call, but we didn’t get the chance. Only about 10 days after we started talking, she let us know her due date had moved up significantly—to within a few days.

We dropped what we were doing and drove fourteen hours straight through to be there for the birth of our child, stopping only for food or gas. We each took turns driving while the other wrapped up work from the passenger’s seat.

When we were about an hour and a half away, she texted us saying she was going into labor. We were exhausted after having been on the road for so long already, but the adrenaline rush from the text got us through. We got to the hospital at about six in the morning only to find out we were in the wrong building. We ran across the parking lot to the correct building.

A few minutes later, the hospital staff member told us someone would be down to talk to us shortly. That didn’t sound good. The next 15 minutes were the longest of our lives. Steve paced nervously around the waiting room until the text message came through. Lindsay looked at him with tears in her eyes and told him it was a girl. We hugged each other, and Steve sat down as we held hands.

When we finally arrived at the delivery room to visit the birthmother, she was holding Zoey. She said, “Do you want to hold her?” Our world changed in that instant. She was the most adorable baby we’ve ever seen. We told her we’d name her Zoey, which the birthmother loved. She wanted a closed adoption but then said it would be okay if we sent her occasional text messages with photos; we happily obliged. We hope someday Zoey can have a relationship with her birthmother. We want her to understand the courageous decision her birthmother made and to get to know her roots.

Our lives now feel surreal. We can’t believe we are finally parents and have a perfect baby girl. When we go for walks with her and our dogs, we still feel like we’re in a wonderful dream.

The adoption process has been brutal on us psychologically. We had to really pull together as a family to overcome the emotional hurdles, but we did it. We are home now, just the three of us. There will be presents under the tree at Christmas. There will be late-night feedings and tantrums, but even during those times many would consider to be low points, we will just smile and think to ourselves how lucky we are.

Take the first step by filling out our free adoption application today! As of December 8th we currently have 2 spots available!

Start Your Adoption Journey Today! As of December 8th we currently have 2 spots available!