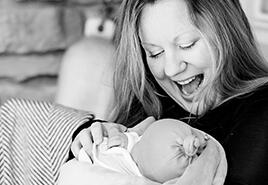 Adoption Is Not the Last Resort

Adoption has always been my first choice for having a family. I’m a teacher and have served as a CASA, which is a Court Appointed Special Advocate for abused and neglected children. Being a child advocate both through my profession and service, I’ve always seen a real need for children to have the love, safety, and security needed to thrive.

I have always wanted to be a parent through an adoption process that values choice, so when I found Angel, I knew they were the kind of partner I had always wanted to have on my adoptive journey. I’ve always believed the adoption process should be child centered and birthmother centered. I will remain forever grateful for the support I received from the team at Angel and their empathy as they walked alongside me throughout the process.

In the beginning, knowing a bit about the system, I was hopeful. I kept my head in the clouds and feet on the ground. I knew there would be challenges, but like other parts of life, nothing worth it in life ever comes easy. I was confident that the process would work; I just didn’t know how it would look. I kept a confident mindset that I would roll with whatever the process asked of me…and ask of me it did.

The Adoption Process Is Not About You

The process ultimately took 29 months and 10+ opportunities to lead me to my child. I watched countless family and friends build their families around me while I waited. I fielded speculation and distrust in the process from well-intentioned people. I even faced my own speculation, around month 26, and questioned if this was the right line to be standing in to build my family. I endured, and later embraced, a disruption, which occurred after five days of having the baby in my care. This disruption only cemented my conviction that a birthmom needs advocacy and deserves an approach that defends the choice to place or parent.

The disruption was the outcome but not the journey. The journey began months prior as I built a communicative relationship with a woman who adamantly referred to the baby as “your son.” We built an open and trusting relationship, sending regular texts, pictures, and questions. We even built a birth plan that included me as a support person in the delivery room. After arriving halfway across the country for the baby’s birth and welcomed into the delivery room, it became apparent to me that the birthmom was not receiving the support she needed from the retained agency, as they were relatively absent prior to, during, and after the baby’s delivery. They noted that since the baby was born on the weekend, we could not expect to be supported at the same level as if it were a weekday. As such, the system literally failed her. Once we discharged the hospital, we were to wait for four days, with the baby in my care, for the birthmom to sign relinquishment paperwork. About ninety minutes before signing, she decided to parent instead of place. I have never felt such a whirlwind of conflicting emotions and cognizant appreciation for a birthmom’s right to choose. It was the hardest day of my life, and I know we can do hard things. My heart was heavy as I packed up my hotel room, complete with a suitcase of baby clothing, and placed the empty car seat in the back of the rented Subaru to begin the 15-hour drive home. That drive became my therapy as I tried to wrap my brain and heart around the many facets of a disruption. It was back to the drawing board, and Angel was right there with me.

This disruption triggered many feelings of injustice. I knew the system because I was an insider. Experiencing it so intimately from an adoptive family viewpoint allowed me to witness the significant areas that needed improvement. It led me to conclude that every child needs advocacy and every birthmom needs to be provided ample opportunity to decide for themselves. We have a lot of improvement to make in a system that sometimes fails those it was designed to support.

Ultimately, the adoption process is not about me or those like me. It is about the child and the birthmom’s choice to place or parent. It’s being able to see that the goal is much larger and more important than yourself and finding creative places to pull confidence from along the way. The process helped prepare me for becoming a mom because now, more than ever, it’s about my child.

When You Make a Plan, Something Else Happens

After 29 months of accumulated experiences, I experienced an immediate connection with my son’s birthmother. One particular moment to note is that my child’s birthparents were “looking for a couple who could not have children, with a great love story like ours.” Instead, they found and connected with me, a single mama who can have children. We learned and laughed that when you make a plan, something else happens. The three of us will always share a love and connection for this perfect baby. I will forever honor them and their decision made out of a shared love.

Our story will always be our own. The adoption process has taught me to discern the decisions that are made out of love and those that are not. As my child grows, I want him to feel this love and pay forward the love he receives to others. The adoption process has given me the opportunity to put my values into action, and I will remain grateful for the journey that led us to each other.

Take the first step by filling out our free adoption application today! As of August 14th we currently have 2 spots available!

Start Your Adoption Journey Today! As of August 14th we currently have 2 spots available!