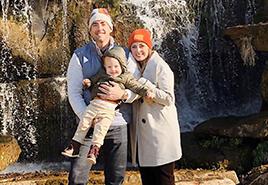 From Loss to Completion

After trying for seven years to have a baby, we were finally diagnosed with unexplained infertility. Right after that, we got pregnant. We were so happy. We had all of these expectations. Then we were emotionally shattered when we had a miscarriage. It took us two years to nurse ourselves out of our grief. We felt so raw and broken.

After that, we couldn’t go through IVF. We simply weren’t attached to the idea of having a biological child anymore. We knew adoption would be the right option for us.

Angel was one of the first partners we found through our research. We read literally everything on the website and were impressed with their success rate. We reached out and found them to be very responsive. Our questions were immediately answered. We felt they were frank and honest about the journey, and they made us feel comfortable about starting the process.

Initially, we were nervous. We were nervous about the home study, the expenses, and the fact that there were no guarantees. We feared the unknown. Then we thought about what the birthmothers must feel. Their loss was a trigger for us. We felt like each step we took initially required courage from us. We prayed and got up the courage to complete one thing at a time.

When we told our parents, there were some tears, some worries, and a lot of encouragement from them.

Is This the Norm?

Angel sent out our profile to some expectant mothers at the three-month mark. We hadn’t finished our home study yet, but we were immediately connected with an expectant mother. She told us right away we were the couple she was looking for. We even traveled to her state to visit her. Then, as time went on, we noticed something suspicious. She was increasingly requesting financial assistance. She even went so far as asking us to buy gifts for her children for a holiday.

We didn’t know if this was the norm, but our intuition told us this simply didn’t feel right. Eventually, a local social worker did some research on her and found out she had done this multiple times to other families. She had no intention of going through with the adoption process.

We were worried and heartbroken. What if this was how it was going to be? We called Angel and spoke to the adoption coordinator there. After several conversations, they eased our fears. They told us this happens, but this is definitely an outlier and not the norm at all. Most of the expectant mothers are truthful about their situations and the help they may need.

So we went ahead. We were connected for a short time with another expectant mother who ended up keeping the baby. But soon we spoke to Jake’s birthmother.

She had seen our profile online. We texted for a couple of hours, and we felt like we clicked right away. We both knew this connection was different. Jacob’s birthmother said, “Now that I’ve talked to you, you are definitely my choice.” Shortly after, she had a doctor’s appointment, and she told us the gender of our baby.

We celebrated. From then on, we texted every day. She kept us updated on everything that was going on with the pregnancy. We felt like we were going through the pregnancy with her. A month later, we met her and her two other children. We made a point to spend a few days getting to know her.

That time really solidified our bond, and we felt very confident that she would be able to go through with the process. She was very sure of her decision. At the same time, being 20 years older than her, we at times felt like we were parental figures in her life. We became protective of her. In the back of our minds, we knew she would have to deal with a tremendous loss. We felt this loss would be even greater than the one we had experienced. She was so young. We felt for her. We wanted to support her as much as we could and help to minimize her grief.

After we came back from the trip, we hired a social worker to help her create a birth plan and to support her emotionally. We realized we wanted to be there for her, but we also knew she needed a professional she could confide in. She was grateful we cared about her. Our relationship was already great at that point, but this improved the relationship even more.

We never thought it would be possible for us to be in the delivery room. It was only something we dreamed about. We never would have asked to intrude on such a private moment, but she included us being there in her birth plan. When the due date came and nothing happened, we drove up, rented an apartment, spent time with her, and waited. After a week, we got up at 4:30 a.m. to drive her to the hospital, where the doctor induced her. Jake came just an hour and a half later.

We were so happy as we cut the cord. But the whole experience was a blur for us in the delivery room. We were crying, sobbing, and shaking out of happiness. When they placed Jake on our chests, we were flooded with relief. It was as if we could finally exhale. It was a moment of real healing for us. After so much loss, our spirits felt renewed.

Jake’s birthmother was really like a daughter to us. We came to really love her as a member of our family. She pumped breast milk for Jake the first week, and she brought her boys over to see him and to bond with him.

When we had to say goodbye, we felt so much for her. With our experience dealing with loss, we wanted to shield her from the pain. We stood there and hugged her for a very long time. In the end, she thanked us for loving her son and taking care of him. We promised her he would always know who she is and how much she loves him.

Throughout the process, she told us she wanted an open adoption. We wanted our child to be loved by as many people as possible, and we also didn’t want her to wait for updates from us. We set up a private Facebook page where we share pictures, milestones, and anything we’d like to write and post. When she wants to check it, she can check it and get updates. She often replies to our posts, and we feel like we are still connected.

After some time had passed, she told us it was a lot harder for her to let go than she thought. At that point, we knew we had to do what any parent would do and pay for counseling for her. With a counselor’s help, she moved on. We are so glad she did. She’s now thriving in her own life while parenting her boys. We couldn’t be happier.

The adoption process was not easy for us. After suffering so much loss, the emotional ups and downs felt almost impossible to deal with at times. We prayed a lot. We were so fortunate to have a support group to lean on. We allowed ourselves to feel every emotion even though at times we felt angry when things didn’t work out and even jealous of Jake’s birthmother. All of those emotions were good and necessary though.

Adoption is the greatest experience we could’ve gone through. We’ll probably expand our family again through adoption, but for now, we are perfectly content. We didn’t just adopt Jake but gained another family in the process.