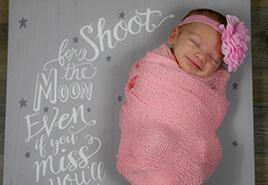 Scott and I had been married for about five years. Building a family was never a question of if we wanted it, it was when. We knew in our hearts we were ready to take that next step. After trying to get pregnant naturally, it never came to be. It was emotional for both of us. When we were unsuccessful that route, we then tried fertility treatments. After several doctor appointments and tears later, we were unsuccessful yet again. The question ran through our heads, “Why us?”

Adoption and a Pandemic

It was hard to accept we would not be able to have kids on our own, but after exploring other options, we discussed we wanted to move forward with expanding our family through adoption. We found Angel Adoption and from that moment forward the process moved rather quickly. Angel prepared us for adoption through phone calls and coaching us about what the process could look like. We appreciated their transparency because it allowed us to be prepared as much as we could for any situation handed to us.

The first step in the adoption process is to get a home study. While every timeline is different with getting approved, we had another hurdle to overcome: Covid-19. We were nervous we would not be able to start, because during this time the state was not allowing any home study to be conducted. Luckly, a few weeks passed and the state adjusted to the current pandemic situation. We ended up doing half of the process virtually while the other half was done on-site.

Once we became home study approved, the waiting process began. One of our biggest fears throughout this process was wondering if expectant mothers were viewing our profile. We would anxiously wait for that life-changing phone call.

Some time had passed and we were on our way for a family outing on the boat. We were trying to keep our minds busy with friends and family in hopes of easing our minds. While enjoying the day out on the ocean, we got a call from Angel about a last-minute adoption. Flooded with emotions, we found ourselves apprehensive about the situation because of potential drug use. Knowing this was a once in a lifetime opportunity, however, we gathered all of our belongings and drove through the night to get to the hospital.

When we arrived, the birthmother had already signed her consent forms and was in contact with her attorney. Everything was happening so fast; our minds were racing at a million miles per hour. All we kept thinking about was how the baby was. Moments later, we found out she was in the NICU. Our hearts sank.

Walking through the NICU doors was such a spine-chilling experience. Seeing all of these babies fighting for their lives when they have not even seen the world yet is an eye opening experience. It grounds you to live life to the fullest. Monitors were beeping in the background as we laid eyes on our sweet Raeyln. Tears filled our eyes as we never thought we would be meeting our child in these circumstances.

In the following days, as Raeyln was still fighting, we were waiting for the birthfather to sign his consent forms. This was another obstacle we had to overcome. Thankfully, he ended up signing the paperwork and Raelyn was finally ours.

We spent the next two weeks in the NICU; that was our new home. We spent every minute of every hour of every day behind those walls holding her and being there for her. Holding her for the first time was intimidating. We did not know her exact condition and we did not want to hurt her. It is crazy how you just fall in love with this little human the moment you lay eyes on them. All of our fears vanished as we knew in that moment she was our daughter and knew she was coming home with us.

As we were heading home, our friends and family were sweet enough to set up the nursery and the house. We had an amazing support system throughout this crazy journey, which made the process just a little easier.

Going through this process brought forth a whirlwind of emotions. Scott and I go through life unplanned. I think that was something that helped us throughout this process. We knew whatever was meant to be would be. So our advice to other prospective parents is to be patient and trust the system. Know it is normal to experience doubts and question your patience, but know there is a team working behind you to get you that family.