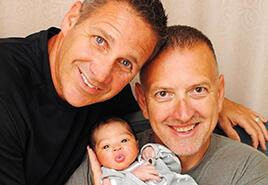 Robert and I have been together for a total of five years now. Since the beginning, we have talked about adoption and knew it was something that we wanted to pursue. After two years of being together, we knew it was time to start the process. We began to talk with our first agency that was local to where we live. We got all of our materials together and finalized when the agency reached out to tell us that they did not want to work with us anymore. That was a jolt that went through our hearts. It was the first time we have felt discriminated against for being a same-sex couple. After being dropped from that agency, we found Angel Adoption through a friend.

When we started the process with Angel, we felt like we were home. They made us feel so welcomed and never gave us any doubts of adopting as a same-sex couple. They held our hands through the entire process, comforting us when times were rough. After our paperwork was finalized, then it was a waiting game. Our patience was tested several times throughout the adoption process because we never knew when we would get our first call.

Is this journey for us?

After a few months of our profile being active, we were chosen by our first expectant mother. We were overjoyed because things were starting to feel real. Through all the paperwork and profile-making, nothing seems real until you get your first call of an expectant mother choosing you to care for their child. When we were chosen we were on vacation and all we could think about was her.

We were in constant communication when one day she vanished. This seemed to be our pattern throughout our journey. In total, we were chosen by six expectant mothers when our seventh became our family. Going through this process and so many different expectant mothers, there were times when we questioned if this was actually in the cards for us.

We were nearing the end of our contract when we got a call from Christain’s birthmother. It was hard for us to be excited because we were so burnt out from our previous experiences. Angel was there for us through this difficult time and understood if we did not want to move forward with the process. Something was telling us otherwise and that we needed to give it one more chance.

Christain’s mother was about a month out from delivering. In our minds, we were questioning everything because we had gotten to this point so many times and then all of a sudden it was wiped away in a blink of an eye. One day, we got a call to find that Christain’s mother was in labor. She wanted us to hold off on coming until things started to progress. After what seemed like a lifetime, the nurse called to tell us that we should come. We ended up driving through the night.

We were still skeptical about it actually being real because we had been in this exact situation multiple times before. It was easy to question ourselves because we had two strikes against us that traditional couples did not; we are older than the average person looking to adopt and we are a same-sex couple. As we drove, we realized that we did not have any baby supplies. With skepticism in the back of our heads, we decided to stop on our way to pick things up but knew that we were able to return it if things fell through.

When we arrived at the hospital, Christain was already born. We signed all of our paperwork and found out that Christain’s birthmother wanted us to meet him. At this point, she had not seen him herself and was waiting for us to be the first ones to hold him. It was an emotional rollercoaster. We were crying the entire time wondering when we were going to wake up from this dream. In truth, we never woke from the dream, because it is our new reality.

Our Advice to You

The reality is that this process is not going to be the same for everyone. We knew we had to put our faith into God and let Him guide us through this journey. When times were tough, we knew we had to put ourselves in the expectant mother's shoes and realize that this was just as hard of a journey for her if not harder than the one that we are going through. We almost gave up, but thank goodness we did not because we would not have Christain.

Know that each day will be different. One day you will be crying and then the next you will be laughing, but know that you have to have patience and faith. Having a strong relationship with each other made this process easier knowing we can lean on each other through the good and the bad.

Whatever your story ends up being, just realize that God wrote that story for you. We are thankful every day that we went through this process because now we get to share our story knowing that it will help other people.

Christain is our entire world. Parenting is hard but so rewarding. We would never change the experiences we went through because it led us to where we are today. We know that there will be conversations to be had in the future as well as good times and bad times, but know that this process will always be worth it.