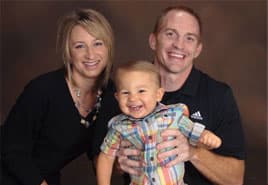 We had gone through infertility for seven years. We had a lot of hardships with it and we lost five children. When the fifth one did not pan out it emotionally broke me. Luckily my husband had gotten over his concerns with adoption. He was not pro-adoption for quite awhile, but he couldn’t handle seeing me go through anything more physically or emotionally.

We spent five months doing some research. My husband had actually spoken to a coworker who had gone through Angel and had a positive experience. We looked at private adoption and then Angel came about. When you Google “adoption” Angel is one of the first things that comes up. A couple people recommended more personal stuff, like doing your own marketing, going to places in the community, etc. But we’re in education and we didn't want to go that route for personal reasons. It was between The Cradle and Angel Adoption so in the end I determined they were a better fit for us. The philosophy behind it was better.

It is a challenge to start just in the fact of putting a portfolio together. When you are trying to paint yourself in the most positive light it’s emotionally draining. Waiting to determine if someone is going to pick you and questioning whether or not you have the right pictures and the right information. It’s an emotional rollercoaster.

We were picked immediately. That circumstance did not pan out. Once that happened you start to get nervous. Did I do something wrong? Did I say something wrong? Why didn’t it work out? There are many reasons why someone might think they are going to give their child up for adoption but then change their mind. Our birthmother was the fourth contact that we had. Three of them didn't work out. It’s exciting when you get that call and your profile was seen and somebody wants to talk to you. But then if that doesn’t pan out it’s very challenging emotionally.

The prospect that something would finally happen. That I would finally have a child. You see a lot of success stories. I know a lot of people that are adopted and who have adopted. We work in education and I have students with adopted parents. I knew in my mind no matter how much I struggled when people weren’t picking us that bottom line - there would be a baby.

We did an open adoption. It’s more and more prevalent that agencies and social workers are going to encourage what’s best for the child. And what’s best for the child is an open adoption, where you can communicate and find out things. We’re having our son assessed for some possible speech development issues and it was important that I got some background regarding any issues she may have had. She has four other children who are siblings to my son. It’s very valuable to be able to have that communication and for her to be able to answer those questions for me.

The January before my son was born we flew out to Texas where she lives. We took her out and spent the entire weekend with her. We got to know her, talked and picked names together. We had names that we were looking at and we included her in the conversation. It was a good experience to have.

Our birthmother had some medical issues that prompted her to be in the hospital frequently towards the end of the pregnancy. The morning before he was born she took herself to the hospital because of severe back pain. We were ready to leave and could have been there for the delivery but she was only one centimeter dilated. We kept asking her “Do you think it’s time?” because it was a 24 hour drive for us. By 8pm that night we get a call from her that she’s now four centimeters and she’s going to deliver. At that point it was utter chaos. We had most of our stuff packed in the RV in anticipation of needing to go quickly. We were in our pajamas getting ready to jump into bed. Then we were running and making sure we had clothes and all those last things. We were on the road to Texas by 9:30pm. It was exciting but at the same time it was utter chaos.

Very surreal. Until those papers are signed and the baby is in the car you still have nerves and doubts. There is still apprehension. You’re thinking “Is this really happening? Is something going to go wrong?” You are nervous with the wait period of the birthparents signing off their rights. It was exciting and I had lots of emotions. It was also challenging because the birthmother is in the room. It was challenging to express everything I was feeling because you have another person that’s not feeling the same way. There is somebody who is hurting. It was a bit uncomfortable for a lot of reasons. I think I was more nervous because...I’m now a mom!

We still communicate with the birthmother. It’s primarily through Facebook.

Would you adopt again?

I would love for my son to have a sibling but I don’t know emotionally if I could do that again.

You have to keep in mind there will be a positive end result; no matter what the ups and downs because there’s going to be loads of them. Even though we think very highly of our son’s birthmother she would not have been able to give him the life that we’ve given him and that to me is worth everything. It’s worth every struggle because I know I will give him the best life ever.

Take the first step by filling out our free adoption application today! As of January 18th we currently have 4 spots available!

Start Your Adoption Journey Today! As of January 18th we currently have 4 spots available!