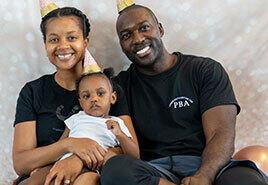 When we got married, we knew we wanted to expand our family. Kenny comes from a large family with five siblings, and that was always appealing to us. We tried for years to get pregnant and then elected to try fertility treatments, which were unsuccessful. After some time and conversation, we felt adoption was right for us.

We researched online for partners to help us in our adoption journey. Angel was the first agency we contacted, and we knew immediately it was going to be a good fit; we just felt really comfortable working with them. They made us feel supported.

In the beginning, we were nervous and excited but surprisingly calm. We were expecting the process to take 15 months to 18 months, and during that time, we would do everything we could to prepare ourselves to become parents. Little did we know, less than two months after signing our contract, we would get the call saying our daughter was here!

We didn’t tell a lot of people that we wanted to adopt, only close family and friends. Our families were super excited. Kenny has three adopted siblings, so we were familiar with the concept of adoption. Everyone was ready for us to become parents.

I am a go-getter. I'm not very patient and like to handle things as they come. In less than two months, all of our paperwork was completed, and we were ready. Our profile actually never went live online. However, it didn’t take long for us to make our connection with an expectant mom.

Our first connection with an expectant mom lasted less than a week and didn’t work out. She was an underage mother whose parent had legal guardianship over the baby. It wasn't meant to be. That failed connection didn't deter us at all. If anything, it excited us because we were so new to the agency. About five weeks into our contract, without being on the website, we had already made a connection. All we could think was WOW!

Not According to Plan

We were in a state of anxiety, trying to navigate these changes, when Angel called us.

It was the day after Christmas when we got a call from our coordinator. A baby born on Christmas Day and was in need of a loving family! She was born three months premature, and they wanted to know if we would be interested in speaking with the birthmom. We agreed. In a few hours, we were packing up the dogs into the car and driving 15 hours to the hospital. When we arrived, we talked briefly with the birthmom. We also had conversations with our daughter’s medical team and were briefed on any possible health concerns. The attorney came, all necessary documents were signed, and shortly afterward, the birthmom was discharged. We were parents!

Peyton was premature and stayed in the NICU for the next 52 days. We booked an AirBnB and went to the hospital every day.

We stayed with Peyton for 12 hours every day. The hospital staff knew I was a nurse, so they let her take Peyton’s blood pressure, temperature, etc. We did skin to skin (kangaroo care) with her up to eight hours a day every day. In these early days, we bonded deeply with her.

She thrived and gained weight steadily as she progressed on a normal time scale as far as development was concerned. When the 52 days were over, it was Valentine’s Day weekend, and we were finally able to take her home. Peyton has been the poster child for health since she was born.

In some ways, our adoption story is the perfect scenario. We couldn’t be happier. But at the same time, we worry that our bar was set so high that if we adopted again, we would have a harder time dealing with the ups and downs.

We still can’t wait to get started on our next adoption. The truth about the journey is that there may be ups and downs, but patience will always allow you to deal with any situation better. For us, having that understanding and patience when our daughter was in the NICU was important. We had to be strong for her, and we were. We believe that our adoption, in part, was smooth because we made an effort to take care of all the hurdles immediately, as they happened. Our paperwork got done in no time, and we were able to have all of this opportunity come to us. We believe everything happens for a reason, and Peyton was meant to be our baby.