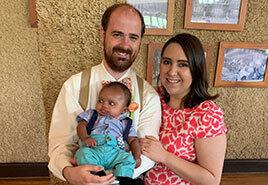 We’ve been married for 10 years. Since the beginning of our marriage, we’ve been trying to have kids, and when we couldn’t conceive biologically, we went to a fertility clinic. We were notified that there was a very low probability we’d be able to have biological children, so we started to think about adoption.

We knew that when the time was right, we’d embark on the journey. One day, we had saved up enough money for the adoption and started seriously researching agencies. We were so optimistic but nervous at the same time. We found Angel and partnered with them immediately.

A year after we put our profile up on Angel’s website, we were connected with a birthmother. We talked to her on the phone a lot and got to know her. She lived only 90 minutes away from us, and we thought it was a great fit. When she went into labor, she told us right away, so we drove down. But she changed her mind at the hospital, and we never even went in to meet her.

The first disappointment is always the hardest. We didn’t prepare for this. Emotionally, we had to learn how to make adjustments.

Our second disappointment came with some phone calls and texts; then she changed her mind after false labor and never contacted us again after we drove across the country to meet her at the hospital.

Our third disappointment was quick when the family decided to keep the baby before we had a chance to form a connection.

By our fourth connection, we were worn out by the ups and downs, but we remained hopeful that our next connection would be the one for us. The baby girl was born on Christmas Eve, and we met the baby and the birthmother. The birthmother was very positive, but right before she was released from the hospital, we could tell she was starting to have doubts and concerns. We were very worried. We had the baby in our custody for about four hours before she decided to take the baby back.

Even after the baby was born, she was still considering adoption, and we kept in touch with her for three months to see how she was doing. Eventually we had to stop communicating with her when we realized she was not serious about adoption.

The most interesting part of the fourth connection, apart from the back and forth, was that in the four hours we had the baby, we struggled to feel a connection with her. We wanted so badly for this to work that we ignored those feelings, but in looking back, it was clear even then that this baby was not our child.

Having four connections that didn’t work out over three years is difficult for any family to process. We had a great group of people who supported us though. Our employers were especially accommodating, allowing us to keep our vacation time during the days we had to travel and understanding when we had to cancel our maternity leave request four times. Our families were trying to support us emotionally too, but with each disappointment, there were residual feelings of loss that kept on piling up. Soon it felt like a kind of trauma we had never experienced before.

We sought professional help to try to process the losses. It wasn’t easy, but we were able to recover emotionally. Taking the step to get professional help was the difference between us being able to bridge the emotions between our fourth connection and our fifth.

The One That Worked

In the interim of our last connection that didn’t work out, we were connected with Alex’s mom. We exchanged pictures and, despite being very different, bonded over the few similarities we did have. After a few weeks of talking and texting, we traveled to meet her. We got to know her and connected with her on an emotional level. This time, something changed in all of us. We were all very rational and less emotional.

When Alex was born, he had to be in the NICU for 10 days. While any time in the NICU is scary, it helped his birthmother separate herself mentally. She had a clear mind and was sure of what she wanted.

Trying to see Alex in the NICU after he was born was difficult. Papers were not signed at that point, and we had to involve the birthmother for permission. We didn’t want to bother her when she was trying to process the adoption on her side. One of the NICU nurses took pity on us, having traveled so far to see him, so we were each allowed in to see him for just a few minutes.

We couldn’t hold him, but we could look at him through the incubator. Seeing him there, we were so overwhelmed with emotions we almost didn’t want to believe we were finally going to be parents. It was clear, in just those few moments we had with him that first night, this was our son. This one was meant to be.

It had been so long at this point that we weren’t sure whether we should be happy and celebrate or wait until everything was finalized. We didn't tell anyone until the papers were signed, and then, once it was official, we told everyone and were finally able to see Alex freely at the NICU.

Our family is finally complete. We have such joy now. We overcame a mountain of hurdles just to have him in our lives. There was no amount of trauma that could’ve kept us away from him. That feeling of strength is now resonating through our household.

We’d like to believe our resilience determined our adoption success. It had something to do with our success for sure. But meeting his birthmother was really the key. Connecting with her and relating to her helped all of us to feel more comfortable. The level of connection we were able to have with her was vastly different from our other connections.

The adoption journey can be long and tough. We didn’t think the emotional ups and downs would be this hard. But having people supporting us and talking it out with both family and professionals helped us process all of our emotions. When you succeed, you can look back and see how far you’ve come. Every day, we look at Alex and know everything was so worth it.