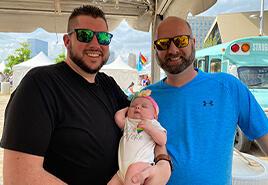 Early in our relationship, we were honest with each other that children were a priority and a non-negotiable for our future. As we were together longer and our life together started to take shape, we started to research adoption. We found that many of the local adoption providers were not the best fit for our family. It was important to us that the provider be not only focused on the adoptive parents but also expectant parents, and after finding Angel, we knew they were what we were looking for.

Not long after joining Angel’s program, we had the opportunity to speak with two expectant mothers. Neither opportunity made it further than exchanging texts, but we saw firsthand that our profile and the process were working.

After our first two opportunities, we were excited when our profile was selected a third time. The expectant mother was early in her pregnancy, only in her first trimester, and she was up front that she was speaking with other families as well. Our connection with the expectant mother was almost immediate. Our conversations flowed so naturally, and we had so much to talk about. We spent the next two weeks speaking daily, and after two months of talking, we were ready to officially move forward with our connection.

During the expectant mother’s third trimester, we traveled to her home state and spent one full week together. We were able to spend time with her and her daughter, we attended a doctor’s appointment, and she even made a special bear for her unborn daughter for us to give to her on her birthday. The bear was an important reminder to us of the expectant mother and the tradition she currently shares with her daughter. We so much wanted to respect her choice and the relationship we were building.

As the expectant mother progressed through her pregnancy, she started to ask more intimate questions about our families and our own traditions. Initially leaning toward a closed adoption, we could now see her opening up to an open adoption. We had always dreamed our child’s birthmother would be a part of their life, and we were excited to see the change starting to happen. We knew the gift of fatherhood would forever be tied to a birthmother, and we never wanted a one-sided relationship.

Becoming a Family of Three

As we got closer to the expectant mother’s due date, her birth plan changed a number of times. We had reservations about some of her requests but knew it was ultimately her labor and delivery. We wanted to support her the best we could.

After going into false labor, her doctor chose to induce her three days later. We started a cross-country drive and arrived as the expectant mother was laboring. We were welcomed by the hospital staff and provided our own room. As we were starting to fall asleep after our long drive, the nurses came in and told us we had ten minutes before the baby was born. We started to move around and get ready when the nurse rushed back in and told us the baby was here! We ran across the hall to be with the birthmother and meet our daughter, Gracie, for the first time.

From her birth forward, Gracie spent every moment in the hospital with us. Her birthmother did not want to meet her the first day, but we were in constant communication with her. The following day she shared with us that she wanted to meet Gracie, and we were happy to all spend time together. Gracie’s birthmother held and fed her, and while some of our support system was worried Gracie’s birthmother might be bonding and spending too much time with her daughter, we never got that feeling. The time together in the hospital felt right and like we were doing what was best for everyone, ourselves included.

After discharging from the hospital, we ended up staying an additional three weeks in Gracie’s birth state. She was born in a small county, and many of those in the court system were unfamiliar with adoptions. We had a number of hurdles to overcome, the main one being that although Gracie’s birthmother had the ability to parent, she was choosing not to. We knew that as parents to an adopted child, we would have to advocate for her and her birthmother, but we never imagined it would be so early and to those within the legal system. When the legal system around us was able to see we had built a great relationship with Gracie’s birthmother and how much her decision was supported, we received our approval to head home.

Our relationship with Gracie’s birthmother remains strong to this day. We are grateful she opened up to a more open relationship as the process went on and that we were able to gain her trust. We are looking forward to having her in our lives for as many years as she will allow us.

Looking back, we now know Gracie and her birthmother were meant to enter our lives. Each opportunity before them felt forced, and we started to wonder if maybe we had done something wrong. Did we need to change our profile? Was it because we were a same-sex couple? We know each of those questions and our doubts were all in our heads. By relaxing and trusting the process, we were brought the child meant for us.